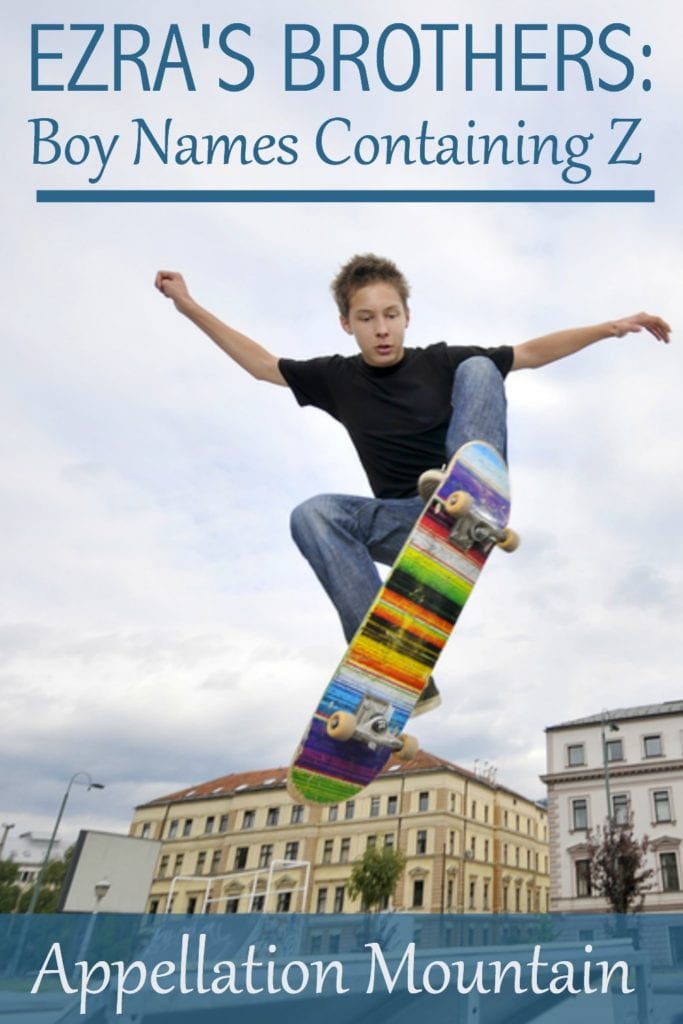 Ezra inched into the US Top 100 this year, by far the name’s highest rank ever. Some of it is Ezra’s literary status and Biblical ties. But it’s also because boy names containing Z feel especially interesting today.

But let’s put the focus on Z. today There’s something intriguing about the last letter of the alphabet. A comes first, both in order and in terms of how many children receive names starting with the letter. Z ends the series, and appears in relatively few names. Zachary and Zane, sure, but it takes some digging to find additional ideas.

A special thanks to @stenoknight for inspiring this post, after discovering German cellist, composer, and conductor Franz Ignaz Danzi. Danzi’s dad was Italian-born cellist Innocenz Danzi. Innocenz also had a daughter named Franziksa, who became a famous singer.

If the Danzi family can rock the letter Z way back in the eighteenth century, surely it can work for families today.

Alonzo (#516) – Doctor Who fans almost certainly remember the episode where the doctor shouted “Allons-y, Alonzo!” You can watch the clips here. Of course, the fictional Alonzo might have spelled his name Alonso. Still, it adds a layer of sci fi fun to a Visigoth name softened by romance languages. Alonzo comes from the same roots as Alphonsus. Proof that boy names containing Z fare well? Alonzo outranks Alfonso by more than 200 places in the US.

Aziz (unranked) – Actor and comedian Aziz Ansari puts this name on the map. The Parks and Reaction alum wears a traditional Arabic name meaning respected. It’s considered one of the 99 names of God in Islam. Ever since Ansari rose to stardom, the name has increased modestly in use. But Aziz remains rare – just 55 boys were given the name last year.

Balthazar (unranked) – By custom, the Three Wise Men are called Melchior, Gaspar, and Balthazar. Balthazar might be the most popular of the trio. (Though Gaspar is also cousin to Jasper, which would reset that equation.) Just as with Alonzo/Alonso, Balthazar-with-a-Z ranks higher. Though in this case, both names remain very obscure.

Boaz (unranked) – Bo- names, like Bodhi and Bowen, are rising in use. How ’bout Boaz? The Old Testament name has never cracked the US Top 1000, though it’s big in the Netherlands. Boaz reached a new high in the US last year, too – 132 boys received the name.

Buzz (unranked) – I find it unlikely that parents would view Buzz as a formal name. Apollo 11 astronaut Buzz Aldrin answered to Edwin, Jr. But then McFly singer-songwriter Tom Fletcher named his son Buzz Michelangelo in 2014. And from the 1930s through the 1990s, a handful of boys received the name. Admiration for Aldrin, maybe? Or maybe some parents have always loved choices like Buddy and Sonny, too.

Cortez (unranked) – The Spanish surname Cortez feels commanding and full of swagger. Or maybe the name seems openly aggressive. After all, conquistador Hernan Cortes claimed Mexico for Spain, causing the downfall of the Aztec civilization and the deaths of countless people. And yet the meaning is gentle – it means courteous or polite. And plenty of other notables have answered to the surname, including poet-activist Carlos Cortez, and opera singer Viorica Cortez. If Jackson works, so does this name.

Cruz (297) – On a similar note, Cruz – the Spanish word for cross – has ranked in the US Top 1000 for years, rising sharply in use after the Beckhams chose the name for their son. It’s spiritual, but remains edgy and cool, too.

Czar (unranked) – I’ve yet to meet a child named Czar, but the data says they’re out there. A dozen boys were given the name last year. Also spelled tsar, this title was given to Russian monarchs. Like the German Kaiser, it’s ultimately derived from Caesar. The ‘c’ is silent; in English, it’s pronounced zahr, rhymes with star and car. With picks like King and Messiah in use, no surprise that we’re hearing other title names, too – especially when they’re also boy names containing Z.

Denzel (unranked)– Denzel Washington put his distinctive name on the map, but the Oscar-winning actor is not the first. He’s actually Denzel, Jr. And Denzil, Denzell, and Denzel boast history galore. You’ll find it on the map in Cornwall, as a surname for those originally from the area, and in sparing use as a given name, too.

Eliezer (unranked), Eleazar (unranked) – Another Old Testament name – or perhaps two separate, but similar names. The Eli- version of the name has hugged the fringes of the US Top 1000 in recent years, possibly because we’ve embraced Eli and Elliott, too. The second name is much rarer.

Enzo (#139), Lorenzo (#135)– Lorenzo is the romance language form of Lawrence, made famous by the famous Florentine statesman Lorenzo de Medici. Enzo seems like the logical short form, not only for Lorenzo but for names like Vincenzo, too. It might also claim independent roots. In any case, it’s among the most popular of the boy names containing z. Lorenzo charted at #216, with Enzo at #330 last year.

Ezekiel (unranked) – Zeke seems likely to appeal to parents considering short Z names like Zane. But Ezekiel is longer, more like Gabriel or Rafael. At #148, it’s another of the boy names containing Z benefited by this trend.

Ezio (unranked) – Ezio remains rare in the US, but a recent celebrity birth boosted its profile. Zoe Saldana welcomed son Cy Aridio and Bowie Ezio in late 2014. The Italian Ezio comes from a Greek word meaning eagle. Usage has climbed since 2014, with 81 boys receiving the name last year.

Ezra (#37) – Literary, edgy, Biblical, and now a Top 100 choice for boys born in the US. Ezra sounds smart, but retains a lot of cool, too, and makes a great substitute for parents concerned that #1 Noah is just too common.

Fitz (unranked) and Fritz (unranked) – Fitz and Fritz bring to mind longer names. Surnames like Fitzhugh and Fitzgerald originally indicated “son of” and later sometimes used for illegitimate children, like Fitzroy – son of the king. Fritz, on the other hand, is short for Friedrich, the German form of Frederick. Both sound short, zippy, and interesting today, though neither appears in the US Top 1000.

Haze (unranked), Hazen (unranked)– Haze might be the equivalent of Hayes, a parallel to Blaze and Blaise. Hazen seems like a modern invention, though it could be cousin to Dutch and Germanic surnames like Haas. Or maybe the names mark an attempt to find a masculine equivalent of Hazel? 49 boys were named Hazen last year, along with 35 newborns called Haze.

Hezekiah (#571) – Like Ezekiel, this name might shorten to Zeke. Another Old Testament name, Hezekiah ruled the kingdom of Judah. Perhaps a name like this would once have seemed unwieldy. But today, longer names for boys feel mainstream, as do less common Biblical choices. If Elijah and Isaiah rank in the Top 50, Hezekiah seems like a perfectly wearable option at #678.

Laszlo (unranked) – I’ve written about Laszlo before, and while the spelling seems non-intuitive for English speakers, it sounds very on-trend. A Hungarian classic occasionally heard in the US, Laszlo makes a bold choice.

Lazarus (unranked), Lazaro (unranked) – Another Biblical pick, Lazarus derives from Eleazar, mentioned above. In the New Testament, Jesus brought Lazarus back to life. The name has yet to crack the US Top 1000, though Lazaro – the Spanish form – has charted occasionally from the 1960s into the 1990s. Interest and use of Lazarus has increased in recent years, thanks to both the letter Z and the name’s connotations of rebirth.

Ozzy (#721) – Ozzy feels like Buzz to me – more nickname than name. Some excellent Os- names come to mind. Oswald might make a fun, retro formal name for Ozzy. Radio-turned-television star Ozzie Nelson answered to Oswald. And Osborn, spell it as you like, seems as valid a surname pick as any. But 70 boys were named just Ozzy last year, suggesting that some parents see this as a valid possibility.

Vincenzo (#748) – Combine the letter V of Oliver and Everett with the o ending of Leo and Arlo, and throw in the letter z, too? Vincenzo has it all! And yet, the Italian form of Vincent remains relatively rare, ranking #815 last year. Perhaps it is possible to combine too many trending sounds into one name, no matter how traditional.

Share your favorite boy names containing Z! Are there others that belong on this list? Updated February 3, 2023 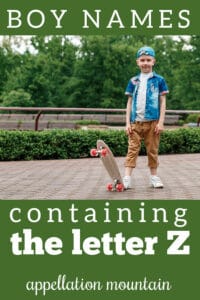 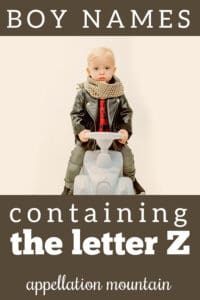