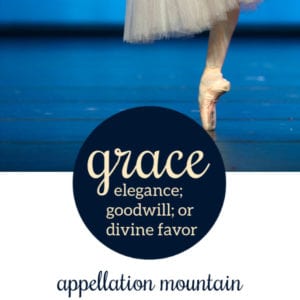 The baby name Grace might be the ultimate virtue name.

In Greek mythology, a trio of goddesses reigned over beauty, creativity, and joy. The Charites played all sorts of roles in many a story, from party planner to stylist to more serious endeavors. The Romans called them the Gratiae – the Graces.

They’re depicted often by artists, including Botticelli and Raphael.

The Latin idea of grace feels broad – it could refer to pleasing qualities, to gratitude or good will. Over the years, the meaning has narrowed in some ways.

The concept of divine grace exists in the New Testament – the word charis is used. Many world religions, including Islam, have similar concepts. It means, roughly, that God freely offers salvation to believers. “The grace of God” refers to that mercy.

Christians say grace – a simple prayer offered before meals. And they discuss grace as a weighty theological matter. Catholics pray the Hail Mary “full of grace.”

The two meet in perhaps the most popular hymn of all time, “Amazing Grace.” Written in the eighteenth century, the story behind it inspired a 2006 movie.

And yet, it’s also a secular virtue.

We’ve describing ballerinas as graceful in movement since the fifteenth century.

Royals are sometimes styled “your Grace.” And you might hear the phrase “grace us with your presence.”

The various uses echo the word’s original meanings – especially beauty. But they go farther, too. “Grace under fire” refers to composure while facing pressure.

We tend to credit the Puritans for embracing this name in the late sixteenth century.

The Dictionary of Medieval Names from European Sources notes that, while mostly true in English, this is one virtue name that predates the religious reformers.

But there’s no question that Grace became a mainstream name for settlers in the New World.

By the nineteenth century, the name can be found in steady use throughout the English-speaking world.

No surprise that we can think of lots of famous women named Grace:

The new Princess of Monaco was wildly popular, admired for her beauty and style – a living embodiment of the name. But even her popularity couldn’t reverse a downward trends in parents choosing the baby name Grace for their daughters.

By the latter half of the century, famous Graces were very different:

But the baby name Grace slowly found favor once more.

Maybe it was the edgier image of Jones. Or maybe it had just been enough time. By 1995, Grace returned to the US Top 100, a solid century or more after it last peaked.

In 1998, NBC introduced us to Grace Adler, one half of Will & Grace, and the name suddenly felt even more like a fresh option. Even if Will & Grace is a sitcom, Grace Adler is a successful, creative business owner and a good friend – it’s easy to imagine the character pushing her name up the popularity charts.

Grace appeals to parents, both devout and secular, as a meaningful choice. Unlike many modern word names, Grace feels traditional and storied. It’s less daring than Journey or Trinity. And the name’s spare, but feminine style, appeals to the same parents who might consider Anne or Rose, Claire or Jane.

Would you consider the baby name Grace?