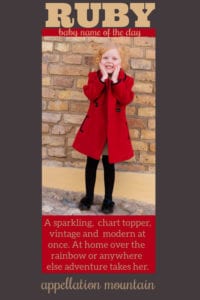 Ruby shines, from the height of summer to the winter holidays. It’s vibrant and modern, vintage and restrained.

What’s not to love about our Baby Name of the Day?

The word comes from the Latin rubeus. Ages before it meant “Hogwarts game keeper,” it simply referred to the color red.

Over the years, we whispered it down the alley, and it became rubi in French, and eventually the English word as we know it today.

A rubinus lapis is a red stone. Technically, they can be any shade of red, from a pale pink to rich hue called pigeon’s blood. But we tend to think of a specific, deep and vibrant color, making the stone and the shade interchangeable.

We’ve been referring to the stones as rubies since around the fourteenth century, but they were valued for centuries earlier. Way back in the 200s BC, rubies were traded on the silk road from China.

Once upon a time, the go-to place for the stones was Myanamar in southeast Asia. It’s now known as Burma, home to the “Valley of Rubies,” and producer of 90% of the world’s supply. However, their mining industry has been plagued with complaints about human rights practices. Plenty of high profile jewelers refuse to import stones from the country.

Nonetheless, rubies remain a heavy-hitter in the world of jewels, and Ruby is the birthstone for the month of July.

VICTORIANA TO THE 21ST CENTURY

Ruby first surfaces as a personal name in the nineteenth century, along with so many other borrowings from the natural world.

But it wasn’t just for girls. The name ranked in the US Top 1000 for boys most years from the 1890s into 1940. A Depression-era Kentucky governor was among the men to wear the name.

It’s tempting to call the name timeless, but that’s not quite accurate. In the 1970s and 80s, it fell pretty far out of favor. Still, it’s never truly been out of use.

Real life women of accomplishment include:

Celebrity parents have embraced the name. Tobey Maguire is dad to Ruby Sweetheart, born in 2006. But Rod Stewart set the trend, giving the name to his daughter with model Kelly Emberg all the way back in 1987.

If you hear Ruby and add “slippers,” you’re not alone. Beloved 1939 movie The Wizard of Oz sent Dorothy Gale over the rainbow. She vanquished an evil witch and then used her sparkly shoes to take her back home to Kansas.

In the original book by L. Frank Baum, the magical shoes are silver. The film writers went with red for the movie because it helped show off the new technicolor film process. And thus a legend was born. The shoes are still on display today in the Smithsonian Museum of American History.

It lends the name a final dose of adventure, and also an appealing emotional connection – after all, the shoes represent protection, but also Dorothy’s power, and her ability to find her way back to those who love her.

There’s no shortage of reasons to love the short, but powerfully stylish choice.

What do you think of gemstone names? Color names? Is this one of your favorites? 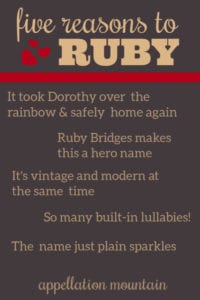