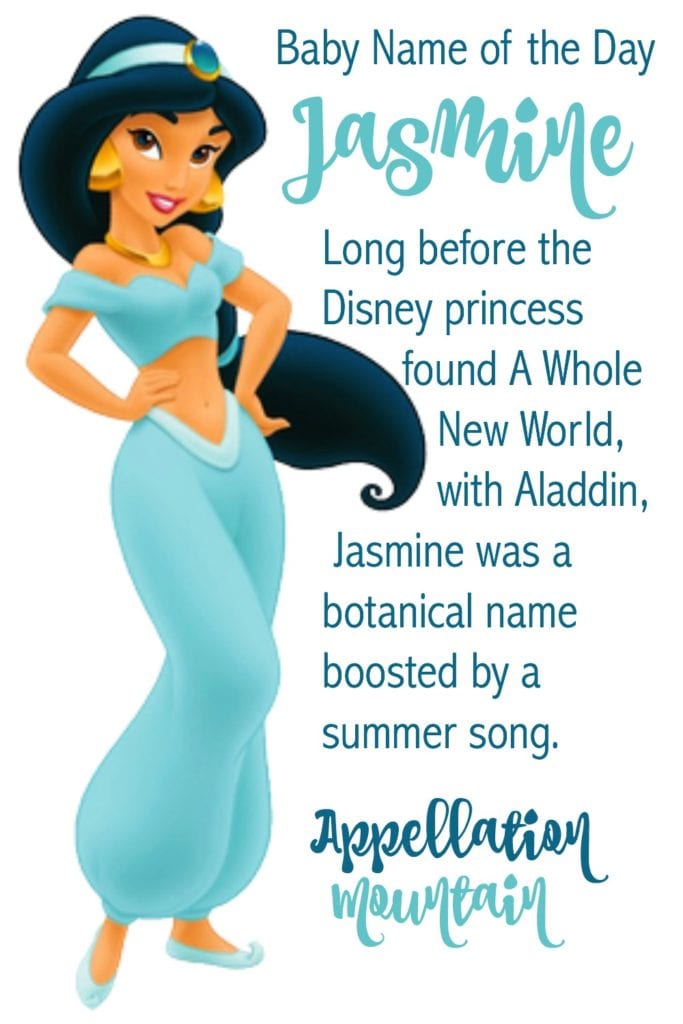 Jasmine is a Disney princess name by way of the garden.

Disney week continues with this popular Baby Name of the Day.

In 1992, Disney was in the midst of a princess-fueled Renaissance. Only problem? All of their successful stories were centered on Europe: Snow White, Cinderella, and Aurora of Sleeping Beauty fame all retold traditional fairy tales. Newcomers Ariel and Belle were every bit as white and European. But the world is, well, so very much not.

So off to the Middle East, to retell a well-known folk tale: Aladdin, from The Book of One Thousand and One Nights. (One problem: it was added to the collection by a French translator in the early 1700s, and it may not have an Arabic source.)

Princess Jasmine Al-Hamed of the equally fictional Agrabah was based on a character in the original story, Princess Badroulbadour. Badroulbadour refers to the full moon, but it might have been tricky for Western audiences to embrace.

So Disney writers chose a different nature name for their leading lady.

Jasmine comes from the Persian yasmin – a climbing plant with flowers often used in perfume. It’s associated with the East. Damascus uses it as a symbol of the city. It’s also the national flower of the Philippines, Indonesia, and Pakistan.

It’s also not entirely novel as a given name. Jessamine and Jessamy may have been used in medieval England. It was certainly heard by the 1800s. (British Baby Names found an Aggie Jessamine Arabella in 1847.)

Back to Aladdin. In the traditional telling as well as Disney’s version, Aladdin was a penniless kid from the wrong side of the tracks. He finds a magic lamp, and suddenly, he’s in love with the princess and marrying into power and fortune.

But the movie doesn’t get credit for the name’s rise.

Jasmine: By the Numbers

Jasmine was already a Top 100 name when Aladdin debuted in 1992.

I thought it might be A Different World’s Jasmine Guy. The actress played Whitley on The Cosby Show’s successful spin-off from 1987 through 1993. But nope. The name entered the US Top 100 in 1986, before the series’ debut.

The name first ranked in 1973, and that’s a clue to one possible influence – Seals and Crofts’ hit song “Summer Breeze.”

Released in August 1972, “Summer Breeze” repeats the lyric “Summer breeze, makes me feel fine, blowing through the jasmine in my mind.”

The song was a hit, and the timing looks right.

Of course, it was also a good moment for J names. Jennifer was #1, and Jessica was headed that way, too. In many ways, Jasmine fit right in.

Along the way, other forms have been in use. Creative respellings like Jasmin, Jazmine, and Jazmin have all charted. But so have imports, like Yasmin.

While the Jaz- spellings are fading quickly, Jasmine remains a culture-spanning possibility. The ties to the Disney princess might be a negative – but then again, the name was popular long before the animated character ever stepped on a magic carpet.

What do you think of Jasmine? Is it a classic, or a fading name? Does the Disney princess make you more or less willing to consider it?