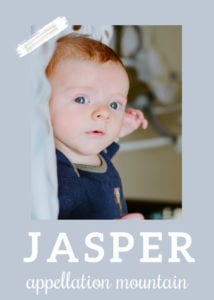 The baby name Jasper feels vintage and just the tiniest bit unexpected, too. But it ranks among the fast-rising favorites of recent years.

Believe it or not, Jasper has never left the US Top 1000 – though for many years, it languished underused near the bottom of the charts.

Today, the name is staging a comeback, nearly returning to its late-nineteenth century heights.

Some credit goes to the hundred year-rule, meaning that Jasper has been out of use so long that it feels fresh and new once more.

But it also fits with more than one current trend:

And the letter J tends to appeal to parents, with boy names ranging from the evergreen James to the novel Jaxon ranking in the current Top 100.

The name comes from the Christmas story. While the three Wise Men are not named in the New Testament, tradition calls them Caspar, Melchior, and Balthazar from at least the sixth century.

Gaspar, Caspar, and Jasper are all cousins, along with Jesper, Gaspard, Kacper, and even Gaspalino.

Most agree that the name means treasurer, which tracks with the image of a king bearing gifts from afar.

So which came first, the gemstone or the Biblical figure?

The Greek iaspis referred a precious stone in the Old Testament. (Though we can debate whether they used the word to refer to the same stone we know today.)

In Old French, iaspis became jaspre, and that gives us our word. The gemstone comes in many colors, though we tend to think of it as green. It’s been used since many centuries BC, throughout the ancient world.

So while we hear the baby name Jasper and think gemstone today, they have completely separate roots. Though it does feel fitting for a treasurer from ancient days to wear such a glittering name.

Famous Jaspers abound. King Henry VII had a Tudor uncle by the name, the Duke of Bedford. In the twentieth century, there’s author Fforde, as well as artist Johns.

Jasper Johns takes it in an artistic direction. The artist is known for his bold, pop art depictions of the American flag. He’s considered a master printmaker, as well as one of the most influential artists of the twentieth century.

British designer Terrence Conran has a son by the name; Jasper Conran designed clothing for Princess Diana and won awards for his costume and set designs.

The name’s popularity reaches beyond the English-speaking world. It’s big in Belgium, while Jesper and Caspar make the Top 100 in several Scandinavian countries. Though in many places, it seems to be fading – just as Americans discover it anew.

Around the turn of the twentieth century, the name fell out of favor. It occupied the same space as Jethro or Earl today. It remained a recognizable name, but not one parents were excited to choose, at least not in big numbers.

Later, Disney used the name for one of Cruella de Vil’s puppy-snatching henchmen in 101 Dalmations. And in 2006 romcom The Holiday, Kate Winslet pined for a handsome – but – unfaithful Jasper.

Even if Kate’s beau proved unworthy, The Holiday probably points to this name’s style profile: vaguely British, somewhere between Hugo and Tarquin.

It still feels like an artistic, underused name with a strong tie to the natural world and the Biblical tale of the Magi. But it’s quickly becoming a mainstream favorite, too.

Would you consider the baby name Jasper? Or do you prefer Caspar, Jesper, or one of the other versions?