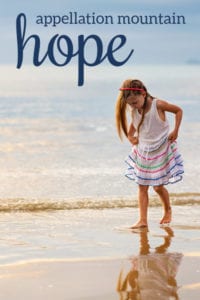 Our Baby Name of the Day is Hope.

In Greek myth, the gods made a woman, and named her Pandora. They gift her with a box, and instruct her to never open it. Inevitably, she gives in to curiosity – and all the evils of the world fly out. But Pandora slams the lid shut, leaving just one thing inside – elpis, or hope.

The concept appears throughout the Bible, too. The most famous passages comes from the New Testament.

And now these three remain: faith, hope and love. But the greatest of these is love.

Another story gives us three sisters with the names Faith, Hope, and Love, daughters of Sophia – wisdom. Legend tells that they were martyred, and they’ve been revered as saints since ancient days.

In Old English, hopian referred to a spiritual concept. One should trust in God’s word. Similar words exist in other languages in the same era, like German hoffen. The exact origins of the term remain shrouded in mystery.

By the 1200s, it shed some of its theological meaning. It became a synonym for wish.

It implies that all is not lost; that things will work out for the best. File it with the most enduring of virtues.

And maybe it feels literary, too, thanks to so many poetic references. Emily Dickinson called it “the thing with feathers,” and Alexander Pope wrote that it “springs eternal.”

But none of this makes it a given name.

In fact, the legendary sister-martyrs? Some speculate that they never lived at all. Instead, inscriptions on tombs referred to the Christian virtues. Later generations simply misunderstood them as given names.

Instead, the Puritans typically get credit for embracing the name first. While plenty of Puritans answered to everyday names like Mary and John, more extreme choices like Humility circulated, too.

Philadelphia socialite Hope Montgomery married Edgar Scott in 1923, in the society wedding of the year, covered in detail by the media. It didn’t move the name – though it did inspire the Philip Barry play High Society, which later became the movie The Philadelphia Story, starring Katharine Hepburn.

But it didn’t budge Hope. Instead, the name started to climb in the 1960s.

Why? In 1957, newcomer Hope Lange earned an Best Supporting Actress Oscar nomination for her role in Peyton Place. The name jumped – just a bit – going into 1958.

But Lange remained in the public eye, first in film roles, then earning two Emmy Awards as the lead in television series The Ghost and Mrs. Muir.

Around the same time, soap opera Guiding Light introduced us to Hope Bauer. The character appeared on Another World, too. Her biggest story lines wouldn’t come for another decade or so, since she was a child when the character debuted.

Similarly, Days of Our Lives introduced a child name Hope in 1974, but it wasn’t until the 1980s – and her romance with Bo Brady – that the character became widely known.

And that’s what sparked the name’s real rise.

In 1983, Beauregard “Bo” Brady rode into fictional Salem on his motorcycle. He rescued her from a conniving boyfriend. But then the boyfriend struck back, kidnapped her, and … well, it’s a soap opera. No one lives happily ever after.

But the pair did become a wildly popular supercouple, right up there with General Hospital’s Luke and Laura. Even if you never watched any soap opera, odds are that the names sound vaguely familiar.

Television has continued to boost the name.

Add in at least two more soap opera characters, and it was enough to catch parents’ attention.

In 2008, soccer goalkeeper Hope Solo was part of the women’s gold-medal winning team at the Beijing Olympics.

Raising Hope debuted in 2010, the tale of a single father named Jimmy Chance. If you think Hope Chance is a crazy name for a daughter, well … she started out as Princess Beyonce. The show ran four seasons.

It’s the name of Emma’s daughter on Once Upon a Time, too.

Some virtue names feel like antiques – think Mercy or Temperance. Others sound modern, like Truly and Journey.

Hope strikes the perfect balance. It’s feminine, but frills-free; clearly a word name, but one with history galore. It’s not quite classic, but certainly qualifies as a timeless traditional.

What do you think of Hope? Would you consider the name for a daughter?