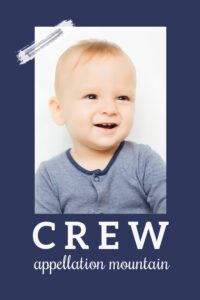 Thanks to Chantal for suggesting our Baby Name of the Day.

As hair cuts go, a crew cut is pretty traditional. It was the go-to choice for GIs during World War II. It’s everywhere in mid-century America, and still a common, conservative option today.

The cut gets its name – at least in American English – from the sport.

That’s because men who rowed crew in the early 1900s, mostly at Ivy League schools, adopted the short cut to keep hair out of their eyes while racing.

And while the sport has become widespread, the idea of crew retains that polish.

The baby name Crew has a little bit of a split personality.

For every one who thinks rowing or J Crew, there are others who hear it and think motley or wrecking.

A motley crew originally referred to a band of pirates.

A wrecking crew might be a demolition team in construction. But it’s since been applied in dozens of other senses, from sports to a famous group of session musicians. (You’ve heard their work, backing everyone from Frank Sinatra to Cher, even if you don’t know it.)

In fact, the word originally comes from the Latin crescere – to grow. In Old French, a creue meant an increase in military recruits. By the sixteenth century, the word referred to the band of recruits themselves. We can assume that some were orderly; others, not so much.

In New Orleans, you might belong to a krewe. Krewes put on the city’s famous Mardi Gras celebrations, sponsoring floats and parades.

That could put them on the rowdy wrecking/motley side of the line. But it’s worth noting that krewes are full-blown civic organizations, known for significant charitable work.

The world-famous Krewe of Rex parades on Mardi Gras itself; the foundation associated with the club has granted millions of dollars to New Orleans public schools, as well as other efforts.

But none of this explains how the baby name Crew came into use.

Like so many choices, it started out as a surname.

Instead, he probably came from an English town, north of London and south of Manchester. The name started out as Cryw in Welsh, or possibly criu. It originally referred to a weir, used in a stream to trap fish, though it can also mean crossing.

You might think of the fictional Sara Crewe, created by Frances Hodgson Burnett for her enduring novel A Little Princess.

Like so many place-names-turned-surnames, Crew eventually made its way to the given name spot.

But unlike Hunter or Carter or Reid, the baby name Crew first appears in US data late – all the way in 1995.

That tracks with the expansion of J Crew. The company adopted the name in 1983, opened its first store in 1989, and became a 1990s staple.

But then television design duo, Chip and Joanna Gaines, welcomed baby five. The couple’s four older children are Ella Rose, Emmie Kay, Drake, and Duke. Would the new baby also have an E or a D name? A double name?

Even without the celebrity design duo, the baby name Crew might’ve caught on.

It’s a single syllable name, brief and brisk, just like Jack or Cole.

We love Drew, a name that peaked in the late 80s and 90s, just before Crew got its start.

But it’s the dual nature of the baby name Crew that makes it a hit.

Like Wilder or Brooks, Crew is a preppy hellraiser. It’s a name you’d expect to hear in privileged circles. The freshman class at Yale or an associate at a white-shoe firm.

But it sounds just as right jumping off a dock into a Texas lake. Or hiking in the Pacific Northwest.

The baby name Crew is a little bit of everything. A trustworthy, traditional-adjacent name. But also a modern, bold choice.

What do you think of the baby name Crew? 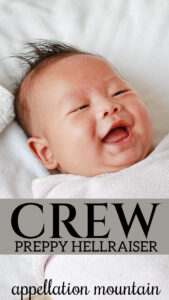