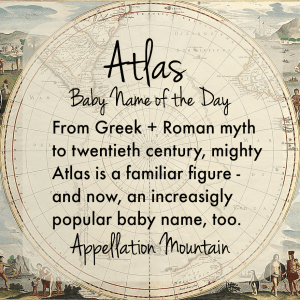 This post was originally published on September 1, 2011. It was substantially revised and re-posted on June 8, 2015.

For years, this name was a rarity. Now it’s standing tall.

Thanks to Sinead for suggesting Atlas as our Baby Name of the Day.

He’s got the world on his shoulders.

Even though he’s usually pictured holding a sphere, it isn’t the Earth. Instead, Atlas separates the heavens from the mortal realm, turning the skies and making the stars revolve. Atlas was one of the Titans, the earlier generation of immortals replaced by Zeus and company.

Some tellings make Atlas’ task a punishment. Other accounts make it a calling, even an honor. But it must have gotten old. Atlas once tricked Hercules into taking the burden briefly.

If you’ve been to Rockefeller Center in New York City, you’ve seen the iconic Art Deco sculpture of the god.

Atlas has come to symbolize a certain kind of capable strength. There’s a modern virtue  aspect to this name, akin to Journey or Haven.

In Greek, tlenai means “to bear” or “to endure.” It’s a likely origin for the name, paired with something called the copulative a – a prefix indicating association, though it’s sometimes interpreted as a negative, making the name mean the opposite: not enduring.

But that’s not the only possibility. It could have older roots, as do some of the other Titans’ names. And some connect it to the Berber word for mountain – adras.

Origins aside, we’ve been borrowing Atlas’ name for centuries to refer to:

Then there’s Ayn Rand’s 1957 novel Atlas Shrugged. There’s no character by the name. Instead, Atlas refers to the captains of business and industry who rebel against government control.

Van Halen put the god on the cover of their smash hit alum 5150. All manner of vehicles have been given the name. It’s found on the map, from Michigan to the moon. It’s the name of a star and one of Saturn’s satellites, too.

Atlas: As A Given Name

Atlas was seldom heard as a given name, though. It was absent from the US Top 1000 through the twentieth century.

There were some comic book characters, including a Marvel Comics villain. The video game series BioShock features a bad guy by the name.

Italian immigrant Angelo Siciliano reinvented himself as bodybuilder Charles Atlas in the twentieth century and sold a strength-training program to transform “97 pound weaklings” into muscular men.

The name was quietly rising by 2007. Then, in 2009, actress Anne Heche – already mom to a son called Homer – welcomed her second child, Atlas.

In just a few years, Atlas has gone from unwearable to outlandish, only-in-Hollywood baby name, to stylish choice on the rise. Maybe it’s our affection for names from myth, or Atlas’ ends-with-s, starts-with-A sound.

Whatever the reason, there’s no doubt. This former rarity stands up well as a child’s name.