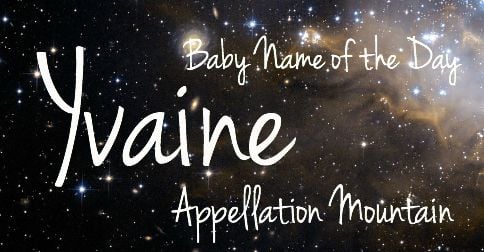 This post was originally published on May 25, 2008. It was substantially revised and re-posted on September 28, 2015.

If Khalessi and Anakin can be baby names, why not this lovely choice from science fiction?

Thanks to Natalie for suggesting Yvaine as our Baby Name of the Day. Neil Gaiman invented Yvaine for the heroine of his 1999 novel, Stardust. It became a movie in 2007, with Claire Danes as the star. Her love interest answered to a more traditional fairytale hero name: Tristan. Though that’s only in the movie. In the novel, Gaiman called him Tristran.

The character introduces herself with the line “My sisters called me Yvaine, for I was an evening star.”

There is no etymological link between the name and the words evening or star – though certainly the “yv” sounds like “eve.” But Gaiman did not pluck his name out of the night sky.

Yvaine: Knights of the Round Table

In Arthurian legend, you’ll find Yvain amongst the Knights of the Round Table. Also spelled Ywain and Owain, the name’s meaning is much debated. Possibilities include:

Origins aside, that famed spinner of fable Chrétien de Troyes penned Yvain, le Chevalier au Lion back in the 12th century. His knight does battle with some bad guys, wins the loyalty of a pet lion and gets the girl.

So Yvaine stands up well as a feminine form of a hero name, and her own adventures in Stardust wrap up with a satisfactorily happy ending.

Before the movie hit the big screen, no one was using Yvaine as a given name.

But in 2008, there were eight newborn girls given the name. Even as the movie has faded, the name has remained in sparing use, with fourteen Yvaines born in 2014.

Some of that might be thanks to the movie’s cult classic status. But it also speaks to Yvaine’s on-trend sound.

Respellings and inventions like Evolet have fared well, too.

Alternate spelling Evaine hasn’t gained traction, though with Elaine on the rise, it does seem like a possibility. 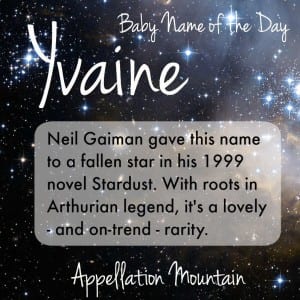 Yvaine might not have much history as a given name, but with ties to Arthurian legend, this name doesn’t feel like a complete novelty.

It shortens nicely to Evie – or is that Yvie?

Another Gaiman semi-invention has raced up the charts in recent years: Coraline, which the author discovered when he swapped two vowels in Caroline. While Yvaine doesn’t seem likely to be as popular, Gaiman definitely qualifies as a talented namer.

If you’re after an unexpected name and a sophisticated sound, Yvaine is promising. It would also be a gorgeous middle name, and a great substitute for the conventional Marie and Nicole.