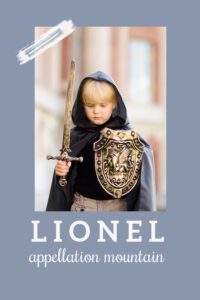 The baby name Lionel balances a fierce meaning with a gentlemanly vibe.

Thanks to Sara for suggesting our Name of the Day

The baby name Lionel comes from the Greek leon – lion.

The king of the jungle has inspired parents for centuries. There were popes called Leo; artists, athletes, and activists known as Leon; and, of course, a Knight of the Round Table in Arthurian legend.

Arthurian legends tells us that Lionel was born a prince a Gaul. When his father died, he and his brother Bors were raised by the Lady of the Lake. Along with their cousin Lancelot they both become Knights of the Round Table.

Bors and Lionel fight amongst themselves, even as they attempt the Quest for the Holy Grail.

But ultimately, Lionel dies in battle against Mordred’s army. His brother avenges his death.

The stories were Game of Thrones in an era before the printing press. And, in proof that pop culture has always guided what parents name their children, King Edward III of England named his second son Lionel after the Knight.

American royalty also embraced the name. Lionel Barrymore reluctantly followed his parents into the business. His acting career spanned five decades, included an Oscar for Best Actor, and the immortal late-in-life role as Mr. Potter in It’s a Wonderful Life.

Barrymore might time stamp the name as a turn-of-the-last-century staple. But the numbers aren’t that straightforward.

It teetered on the edge of the charts for a while.

And yet, the baby name Lionel remained broadly familiar.

Even as the baby name Lionel faded from use, it remained broadly familiar.

Some credit goes to Lionel model trains, founded by Joshua Lionel Cowen. The company produced trains from 1903 until 1959, followed by several revivals.

While Cowen wasn’t the first to put train tracks under Christmas trees – the practice started in Germany – they became an American custom, too. It makes the baby name Lionel feel gently vintage.

Notable men also answered to the name across the years, including:

That’s quite a range.

Lion names are enjoying a moment, from Leo to Leonardo, with plenty of choices in between.

Either way, the sound blends in with romantic, dramatic choices like Raphael and Giovanni.

If you’re looking for something equally polished and fierce, the baby name Lionel might strike exactly the right note.

What do you think of the baby name Lionel? 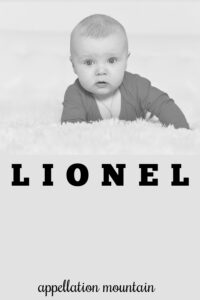