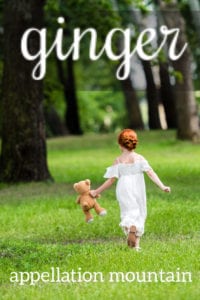 Ginger feels like a quirky, retro choice. But that’s not necessarily a bad thing these days.

Thanks to Del for suggesting our Baby Name of the Day.

Let’s start with Virginia, which means heading back far into the ancient world.

It’s the feminine form of a Roman family name, something like Virginius. While the origins are lost to time, we associate it with the Latin virgo – maid.

Legend tells of a virtuous young Virginia kidnapped by a powerful politician. Her father appealed to the leaders of the Roman Republic to free her, but they sided with her abductor. Instead, Virginia’s father stabbed her to death. It led to a revolt against the ruling commissioners. It also reinforced the idea of a chaste and virtuous maiden named Virginia.

Speaking of stories, the story of the first English baby born in the colonies approaches legendary status – though at least some of it is true.

We know that Elenora and Ananias Dare welcomed a daughter in the Roanoke Colony – modern-day North Carolina – in August of 1587. They named her Virginia. It honored Queen Elizabeth I, the Virgin Queen, for whom the original settlement was likely named. (Way back when, the name referred to the entire eastern coast of North America.

Her grandfather, John White, returned to England to gather supplies for the new settlement. And when he returned? Everything was gone, including the settlers.

Their fate remains unknown, but tales of The Lost Colony have powered folklore ever since. With an irresistible name, Virginia Dare has been borrowed as a symbol by all sorts of groups. from suffragists to tourism bureaus.

Thanks to the haunting legacy of Miss Dare, the name Virginia has remained familiar in the US. It’s often said that Ginger evolved as a nickname, an elaboration of Ginny.

That makes sense. Ginger – the spice – pre-dates the colonial settlement by many centuries.

While the Greeks and Romans used it, the spice was first cultivated in southeast Asia many thousands of years before. It was significant in the spice trade in Europe. It has a long history of use in both food and as medicine, across the globe.

As for the name? A Sanskrit word led to the Greek zingiberis. That filtered into Latin and evolved into gingiber, which appeared in Old English. The French called it gingibre. Ginger is first used sometime in the 1300s.

By the late 1700s, it referred to a reddish-brown color, and by the mid-1800s, to the same color hair. That’s about the same time we hear ginger-snap cookies called by the name, though gingerbread was known many centuries earlier.

But what Ginger lacks? History as a given name.

It first appears in the US data back in 1913, with just a few births.

That’s almost certainly thanks to the popularity of Virginia. Virginia ranked in the US Top 100 in the late nineteenth century, and spent 1916 through 1928 in the Top Ten.

It might have remained a rarity, a nickname sometimes heard, if not for one very famous Virginia: Rogers.

Rogers grew up in Texas, won a 1925 dance contest, and eventually graduated to Broadway. By the 1930s, she and Fred Astaire co-starred in many a famous film. But she did more than dance. In 1940, her performance in Kitty Foyle earned her a Best Actress Academy Award.

She single-handedly boosted her stage name, too.

THE (OTHER) MOVIE STAR

Hit sitcom Gilligan’s Island gave the name to one of its castaways in 1963. Tina Louise played movie star Ginger Grant.

If the silver screen boosted the name, the small screen took it to the top. Characters with the name followed on soap operas Days of Our Lives and Somerset, a 1970s-era spin-off of Another World. The name peaked in 1971 at #187. It’s not always a given name; one of those fictional Gingers was actually a Genevieve.

Along with Scary, Baby, Posh, and Sporty, she helped sell chart-topping, best-selling singles, starred in a Spiceworld movie, and packing arenas everywhere on world tours. They disbanded, but have reunited more than once, from the 2012 London Summer Olympics closing ceremony and beyond.

Even if you weren’t listening to 90s pop, odds are that you recognize their names.

In more recent years, the most famous bearer of the name is probably Jinger Duggar, part of the mega-family featured on TLC reality series. She, like all of her 18 siblings, has a J name.

She wasn’t the first; the phonetic spelling pops up in the birth data as early as 1950. Despite our love of Jennifer and Jessica, Jasmine and Jade, it’s never been especially popular.

We tend to associate the color red with a certain vibrant spirit. Ginger could fit right in with the vintage darlings on the Spunky Girl Names list.

And we do love names inspired by the color red, from Ruby to Rowan to Scarlett.

It has the makings of a hit today: the -r ending of Harper and Piper, the color associations, the ties to the natural world. We’re wild for the names of Hollywood icons – just ask Ava and Audrey.

But the name’s continued popularity into the 1970s likely means that it hasn’t been gone quite long enough to feel truly ready for revival. The 90s Spice Girl tie-in might give plenty of parents pause.

That could change, of course. But a mere 59 girls received the name in 2018 – which puts it close to extinction.

And yet, if you’re after a name that’s daring without being completely new, Ginger could wear well for a daughter.

Do you think this name feels ready for a comeback? 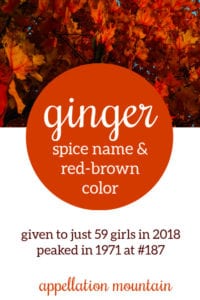