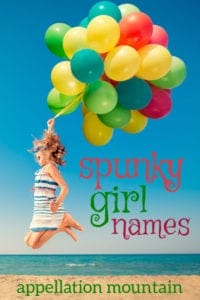 These names feel ready for adventure. They can suit a big personality. But they’re not limited to girls and teens. They’re just right for women of accomplishment, too. Whether you’re naming a daughter or a fictional character, there’s a strength and boldness to these names that makes them terribly appealing.

Read on for 73 of the best spunky girl names.

Borrowed from the Boys

Some parents balk at borrowing girl names from boys, and I get it. With dozens of gorgeous girl names, why steal? But many of these started out as nicknames for equally traditional feminine choices, which casts them in a different light than, say, Ryan or Dylan.

Alix – Strictly speaking, Alix is an old-school twist on Alice. But it feels like a modern answer to Alexandra, too.

Billie – A little bit boyish, and far less involved than the gorgeous Wilhelmina, Billie blends in with girl names like Ellie and Millie.

Charlie – Short for Charlotte, or stands alone? Ever since the 1970s gave us the fragrance Charlie, it’s felt like a spirited stand-alone.

Nico – German singer Nico made her mark with The Velvet Underground, and put this o-ender squarely on the list of maybe names for girls.

Rory – Stars Hollow’s smartest kid made parents see this one as a potential pick for a daughter.

Sasha – It sounds feminine, but Sasha originates as a Russian masculine nickname for Alexander. Beyonce begs to differ.

Shea – A short, bright sound with ties to the legendary home of the New York Mets.

We love a good nature name, but it’s not a single category. Some lean EcoVintage, traditional names like Lily and Flora. Others seem quirky and offbeat. But a handful of favorites from the natural world belong with spunky girl names, too.

Briar – A little bit spiky, with a dash of fairytale princess in hiding.

Clover – As lucky as a shamrock, Clover fits right in with all of those girl names ending with R.

Cricket – Sometimes an affectionate nickname for another C/K name, Cricket works independently, too – especially since Busy Philipps gave the name to her younger daughter.

Daisy – Daisy feels traditional-ish, and yet still has plenty of spirit.

Poppy – All the pop of the repeating P, plus a bright red flower.

Ruby – Sparkly, and the shoe color of choice for spunky heroine Dorothy of Wizard of Oz fame.

Nothing says that spunky girl names have to be short. Plenty of longer names bring just as much spirit.

Annika – A Scandi spin on Anna, there’s something sparky about Annika.

Bianca – Blanche is terribly elegant, but the Italian version of the name, Bianca, has a completely different vibe.

Clementine – There’s something bright and sunshiny about Clementine, possibly because the name is shared with the citrus fruit.

Eloise – Maybe it’s the storybook character, forever six and roaming through the Plaza Hotel. Or maybe it’s just the unexpected mix of sounds, but this name is spunky in spades.

Juniper – A nickname name that bounces off the tongue.

Matilda – Roald Dahl’s whip-smart and kind-hearted heroine earns this name a spot on the list.

Ramona – Does it get any more high energy than Ramona Geraldine Quimby of Klickitat Street?

Veronica – Traditional and edgy, a name with saintly bona fides that’s not quite classic, but could never be dismissed as fleeting.

They’re short for something longer and more elegant, the stickball- playing little sisters of Elizabeth and Mary.

Betsy – Among the dozens of Elizabeth nicknames, many share a certain liveliness – think Libby and Lizzie and Betty, too. But Betsy gets my vote for the spunkiest of them all.

Elsie – Zooey Deschanel’s pick for her firstborn, an Elizabeth nickname with lots of sound.

Hattie – Harriet seems a little more ladylike, but Hattie climbs to the tippy-top of the highest trees.

Polly – A little old-fashioned, but in a skinned-knees-and-fishing-holes kind of way, not a crinoline-and-embroidery-hoops one.

Roxie – Chicago gave us Roxie Hart, and the name has leaned spunky ever since.

Tess – Theresa belongs to saints and queens, while Tess is the daring one.

These names feel very twenty-first century, but with a healthy dose of chutzpah.

Gwen – Maybe it’s Gwen Stefani that does it, or Gwen Stacy. But this Welsh name just plain feels bold.

Kai – From the Hawaiian word for ocean, or maybe from Chinese or Dutch, or some other language entirely, this mini name is more common for boys. But it feels like an update to Kay, modern and bright.

Kit – It could come from Katherine – or Christopher. Or another name entirely. American Girls’ Kit Kittridge was born Margaret. Regardless of the origin, Kit sounds capable and confident.

Liv – It sounds like a command, a directive to go live life to the fullest – and that’s not far off from this Norse mini name’s meaning.

Scout – An active verb, and a literary heroine, too.

They’re names you can imagine on comic strip characters circa 1953, but they’re right at home in the twenty-first century, too.

Cleo – Cleopatra is an empress, but Cleo is an adventurous child – or adult.

June – Sweetly retro, but with plenty of strength, too.

Mae – Delicate and gutsy all at once, thanks to a vibrant sound and the legacy of screen legend Mae West.

Mabel – Mad About You made this name an acronym for Mothers Always Bring Extra Love. But by today’s standards, I think Mabel brings an extra dash of vintage sass.

Surname names just won’t quit, with Taylor and Mackenzie looking for the next generation of surname names for their daughters. These spunky girl names are just right for a new generation.

Darcy – A dashing surname from a romantic hero, but sparky and fun for a girl, too.

Piper – Musical in meaning, and rhythmic to say.

We hear them lots, on everybody’s shortlist and on girls we know in real life, too. But they’re still spunky.

Daphne – A mythological name, and a sprightly piece of music.

Georgia – Southern and high energy, more action hero than belle of the ball.

Josie – A favorite Josephine nickname, and a daring stand-alone choice, too.

Maisie – One of many Margaret nicknames that feels traditional and spirited.

Margot – A go-to name for girls that feels artistic, adventurous, and yes, spunky.

Sadie – A sassy Sarah nickname and a solid Top 100 choice in recent years.

We la-la-love the La sound in girl names right now. And if spunky girl names are your thing? A lot of the Las fit this category.

Della – Della sounds like the girl Friday to a private eye in a 1950s detective thriller – which is exactly what spunky girl names should be.

Lola – Originally short for the buttoned-up Dolores, Lola feels daring and exotic, but right at home on a child, too. Children’s book turned animated series characters Charley and Lola make this name even more kid-friendly.

Lucy – Classic, but with a certain mischievous streak. Maybe that’s down to Lucille Ball, or maybe that’s Lucy’s own charm.

Lula – A vintage Louise nickname lifted by the La sound.

Nola – Short for Magnolia, or possible New Orleans, Louisiana. Either way, it fits.

Stella – The Latin word for star, and a name that shines.

American names can feel especially spunky, like an Aaron Copland fanfare. But there’s no shortage of imports that carry the same spirit. In fact, I’d guess they fit this list in the US – but might not have the same vibe in their home countries.

Cosette – The Victor Hugo character is sweet, but the sound of this name feels at home with Bianca and Bree, Poppy and Lula.

Mika – A re-spelling of Micah, a feminine twist on Mike, or a Japanese import? Whichever is right, this name’s spirit shines through.

Oona – Irish and unforgettable. You might spell it Una, too, but it’s the double O that feels so distinctive.

Romy – An iconic French and German cinema star of the mid-20th century, Romy feels retro, upbeat, and just slightly undiscovered in the US.

Pippa – As in Middleton, of course, the bridesmaid that stole the show.

These are the spunky girl names that don’t quite fit elsewhere in the categories – but clearly belong on the list.

Gemma – As sparking as a jewelry box.

Jovie – An invented name meaning “joy,” Jovie was created for a Christmas story – but could’ve made it to the top – somehow – come what may.

Juno – A goddess name with all the bravado of that ‘o’ ending.

Lainey – Lane belongs to the boys, but Lainey takes it in a feminine direction. They’re wide open spaces names, at home on horseback. But despite Lainey’s status as a modern not-quite-nickname, I think it’s quite flexible.

Xanthe – Another Greek rarity, with a big sound and lots of energy.

What are your favorite spunky girl names? Have I left anything off the list? 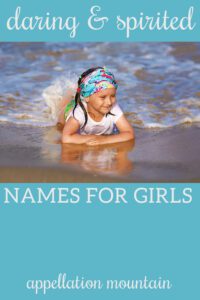 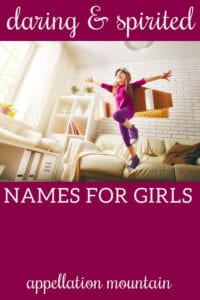