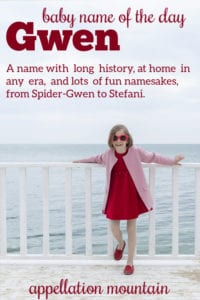 Gwen feels modern, retro, and traditional … all at the same time!

Our Baby Name of the Day comes from this list of the hottest 1919 girl names.

In Welsh, gwyn means fair or white or blessed. In myth and legend, Gwyn ap Nudd ruled over paradise, which sort of rolls all three ideas into one.

But -wyn is masculine in Welsh; the ‘e’ spellings are reserved for girls.

Plenty of compound  names use this element. Gwendolen tops the list, but others, like Gwenllian and even Gwenful, are seen, too. Guinevere comes from the Norman French Gwenhwyfar, which also gives us Jennifer … eventually.

And, of course, Gwyneth Paltrow put her unusual given name on the books, too.

Like Leo or Finn, Gwen might seem like a name that’s always short for something, but that’s not the case at all. It stands on its own nicely. That’s been true for centuries.

Both Gwen and Gwendolyn peaked in the 1950s. That made them a pitch-perfect choice for a new character in Spider-Man.

We met Gwen Stacy for the first time in 1965. She and Peter Parker attend Empire State University, and after Peter moves on from Mary Jane, they date. But comic books give us few happily ever afters. Peter’s nemesis, the Green Goblin, kidnaps Stacy. The pair fight, and in the battle, she falls from a bridge.

At the time, killing off such a major character was considered wildly controversial. No one stays dead in such universes, though, and Stacy has made a few appearances since. In 2015, we even got a Spider-Gwen comic book series. If you’ve watched Spider-Man: Into the Spider-Verse, you’ve seen Hailee Steinfield voice an animated version of the character.

It also keeps the name feeling current, as we keep meeting updated versions as the superhero story evolves.

The other world-changing Gwen is Stefani, lead singer of No Doubt. Yes, it’s Stefani’s birth name. She was born in 1969, as the name was waning.

As far as I know, there’s no connection to Stacy. (Though remember one of No Doubt’s early hits? 1985’s “Spiderwebs.” But it’s not about Peter Parker.)

Stefani has said that her name came from a character in the 1968 novel Airport. It became a successful movie in 1970, with Jacqueline Bisset playing the stewardess who inspired Stefani’s name. It’s one the first of the big disaster flicks, involving a snowstorm, a bomb, and, of course, air travel. But it’s mostly forgotten now, while the singer? She’s become pop music royalty.

No Doubt released their first big album, Tragic Kingdom, in 1995. Stefani launched her solo career in 2004. Along the way, she’s picked up three Grammys, started a clothing line, and more.

At the end of the 2008 Tina Fey-Amy Poehler comedy Baby Mama, Amy’s character has named her baby Stefani – after Gwen.

Most names fits into a broad, general category. Alice reads classic. Avery feels quite modern. And I’d call Bonnie more retro than anything.

But Gwen feels like it fits everywhere. Besides the Spider-Verse and the singer, there’s:

This reflects the name’s long history of use at relatively modest levels. It appeared in the US Top 1000 every year from 1901 through 1981, and again from 2013 to the present. But it’s never risen much higher than the upper 200s.

Gwendolyn, on the other hand, long ranked in the Top 200. And it’s been in the Top 1000 every year from the 1890s onward. Combined with just-Gwen, that’s a lot of girls with the name.

The result is a spare, distinctive-sounding choice, impossible to peg to a single era, and at home in them all.

Would you consider Gwen for a daughter? Do you prefer one of the longer forms? 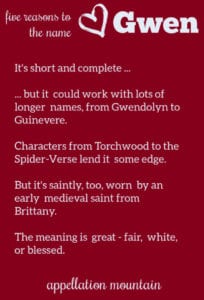