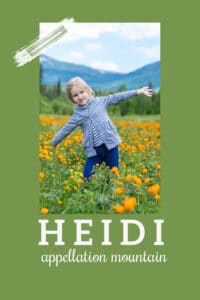 The baby name Heidi combines the charm of the Swiss Alps with a healthy dose of supermodel glam.

Thanks to Alanna for suggesting our Baby Name of the Day.

FROM ADELAIDE via ADELHEID

You might know – or read – that Heidi is short for Adelaide. The sounds and letters don’t make sense, though, unless you know a little bit about Adelaide’s history.

Plenty of Adele-adjacent names have been used over the centuries, including Adelaide. But the versions of Adelheidis that retain the H lingered, too.

And so Heidi is a short form of the Germanic Adelheid, far better known in English than the original.

Published in 1881, Heidi is a children’s story by Swiss author Johanna Spyri. The original version was published in two volumes.

It goes like this: Heidi is a five year old girl, living with her Aunt Dete. Aunt Dete’s sister Adelheid, and her husband, died when Heidi was very young. But then Dete lands a promising job as a maid in the big city of Frankfurt – and Heidi can’t come.

So she’s sent to live with her father’s father – even though he’s a famous grouch, and a little bit of a recluse.

But Heidi makes a home with her grandfather in the tiny mountain village, and slowly wins him over, too.

Just when it looks like that’s the happy ending, Aunt Dete returns with good news: she’s found Heidi a position in the city, too. She’ll be a companion to a girl in poor health.

Heidi and Klara get along famously. Even better, moving to Frankfurt allows Heidi a chance to being her formal education, learning to read and write at last.

But the household is strict, and Heidi is homesick.

After a series of dramatic events, all ends happily.

The name of the title character seems particularly fitting, given the meaning of the name. Johanna Spyri’s Heidi does prove herself a noble type.

Heidi became a bestseller. It was translated into English as early as 1882.

But the book led to very few girls receiving the baby name Heidi.

Instead, Hollywood would put the name on parents’ shortlists.

Shirley Temple was already a major star in Hollywood. She’d been the number one box office draw in 1935 and 1936. Now she played the titular character in Heidi in 1937, and held her position for the third year in a row.

Adelaide was well-established in the United States by the time data was first reported for the year 1880. During the early 19th century King William IV of England married a German princess by the name. The capital of South Australia was named in honor of Queen Adelaide. It’s been widely known in the English-speaking world ever since.

Adeline, too, would’ve been familiar long before Johanna Spyri’s novel debuted. (Though the song “Sweet Adeline” didn’t come along until 1903.)

But Adelheid has never cracked the US Top 1000. And while some versions of the story suggest that Heidi’s original name was Adelheid, the connection may have been relatively thin. Names of German origin were less appealing during the World Wars, too, when the US was at war.

The book Heidi continued to be a favorite. Multiple adaptations followed, year after year, from all around the world.

Likewise, the name caught on.

A 1968 television adaptation came just as the name was nearing peak popularity in the US.

Scheduled to air on November 17, 1968, Heidi would follow an Oakland Raiders versus the New York Jets football game. The teams were at the top of their league in 1968; the audience for the game was massive.

The game went long and confusion reigned. The network decided to start the broadcast of the movie as scheduled, cutting away from the last few minutes of the game.

And during those last few minutes? Oakland scored a twice, changing the outcome of the game in dramatic fashion.

The incident was known as the Heidi Bowl.

It didn’t hurt the name’s popularity, though. Instead, the baby name Heidi peaked at #60 in 1974, when the memory of the interrupted football game was still fresh.

The name’s image could’ve been frozen forever in the Swiss Alps, a wholesome little girl with an infectious smile, happy to spend time in the mountains.

But the along came German supermodel Heidi Klum.

Born in 1973, Klum arrived during peak Heidi in the US. It’s not clear that the name’s popularity in Germany followed the same pattern. There’s a spike in use following the release of the Shirley Temple movie, but nothing in more recent decades.

Still, Heidi Klum shifted the name’s image. Klum graduated from the catwalk to a successful career as a tv personality, hosting reality design competition Project Runway from 2004 through 2017. Not only has the show been successful in the US, it’s been much adapted internationally.

Among many other ventures, Klum has also dabbled in acting, though she most often plays herself in movies like Ocean’s 8.

She’s been a fixture in popular culture for nearly three decades, providing a sophisticated, grown-up version of the name to balance out our image of a young girl.

In some languages, the baby name Heidi sounds more like hay-dee. In fact, Haidee is a separate name, invented by Lord Byron for a character in his 1819 poem Don Juan.

Heide can be another form of Adelheid, but it also coincides with a German word meaning heath.

Chinese folk religion gives the name to a god.

And despite the unusual, I-ending spelling, Heidi has remained the dominant form of the name since its introduction.

The name is often heard in popular culture. Characters on television series like Heroes and Will & Grace have used the name. On the infamous side, Heidi Fleiss went to prison for running a prostitution ring in the 1990s, rumored to cater to the rich and famous. Heidi Heitkamp served in the US Senate. Fans of MTV reality series The Hills will think of Heidi Montag.

It’s tough to separate the name Heidi from the Swiss Alps. And yet, that’s not necessarily a bad thing. Names from children’s literature, like Eloise and Max, retain a certain broad appeal, years after we’ve outgrown the stories. It makes the names timeless, as new generations discover the tales.

A long list of modern Heidis, some almost certainly influenced by Johanna Spyri’s cheerful orphan, have shifted our perception of the name. They’re glamorous, capable, scandalous, or surprising. But they’re all grown-ups, making the name Heidi feel like a possibility that will wear through life.

Parents might also opt to use Heidi as a nickname for Adelaide, or even go old school with Adelheid or Adalheidis on their daughter’s birth certificate. But just Heidi works well, too – a name with an upbeat, retro sensibility that will feel instantly familiar and slightly surprising, too.

What do you think of the baby name Heidi? 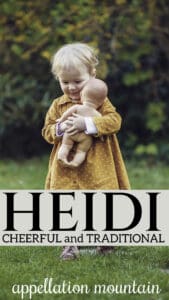 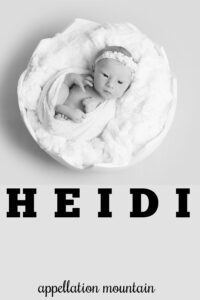