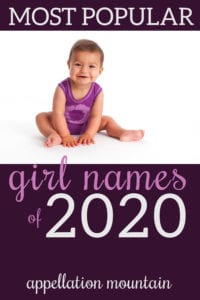 What were the top girl names 2020 at Appellation Mountain?

Before we dive in, know that this list is like no other. Rather than reflect the names parents are choosing for their children in big numbers, it’s based on page views on this site. And this site is small(ish), quirky, and – by design – delves into the rarities and offbeat choices that don’t take center stage elsewhere.

Which means that many of these sixty top girl names 2020 don’t even crack the US Top 1000. A few don’t even appear in the US Social Security data at all, meaning fewer than five children received the name last year. Which is really rare.

Of course, plenty of Top 100 favorites make this list, too. They’re just tucked between the name of a fictional detective – the driver of not one, but two names on this list! – and a couple of rare night sky names and dazzling imports!

Even if you won’t hear most of these names called out on a playground any time soon, that doesn’t diminish our curiosity – or their potential influence. Some of these names pique our interest because they’re only slightly different than current favorites. They seem like logical alternatives to Evelyn or Ava or Zoe … and there’s always room for a few more of those!

The sixtieth of the top girl names 2020 at Appellation Mountain is the Spanish Xiomara, which almost certainly traces its roots all the way back to the legends of King Arthur and Camelot.

Traditional and elegant, sparky and spirited Josephine comes with great nickname options – and sounds perfect used in full, too.

Young actor Zazie Beats, of Deadpool and Atlanta fame, put her unusual name on the map. It started out as a French nickname for Isabelle, Frances, or other names with a strong ‘za’ sound.

So many Rose names are on the rise. While Rosalina remains outside the current Top 1000, that could easily change.

We all know the sweet song from The Sound of Music, and the small, white alpine flower that inspired it. But could Edelweiss – with built-in nickname Edie – follow other daring floral names up the popularity charts?

Popularized by 1991 movie My Girl, Vada could fit right in with so many short, V names for girls, like Violet and Vera.

Neil Gaiman dreamed up this name for a fallen star come to life in 1997 novel Stardust.

A mix of energetic and modern, vintage and lady-like, Lucy almost counts as a classic.

Often pronounced almost like so-chee in Spanish, Xochitl comes from a Nahuatl word meaning flower. That means the languages traces all the way back to the Aztecs, and remains widely spoken in Mexico.

A popular pick in Finland, where Lumi means snow. An accessible rarity, Lumi might be the perfect name for a winter-born daughter.

The nicely international name picks up on earlier favorites, like Tara and Cara. Rising actor Yara Shahidi made it a household name after starring in sitcom Black-ish.

Speaking of -ara names, Clara is the most popular of the (many) Claire names at Appellation Mountain.

This fast-rising name fits with modern surname names like Harper, but traces its roots to classic Mary.

This Chinese and Japanese name feels a little like Nora-meets-Rory. But it probably piques most parents’ interest thanks to North “Nori” West.

A rare and lovely name in the hue of blue.

Emma means Caroline. This name has been around since the Middle Ages.

An old school throwback, as brief and complete as Jane or Claire, but so underused.

Masculine in the Bible, Lael has trended unisex in the US over the last century. Though 2019 marked the first year more boys received the name, with 52 boys versus 40 girls receiving the name.

A nature name with a vibrant, bouncing sound, Juniper is a true twenty-first century powerhouse of a name.

A rarity from the late nineteenth and early twentieth centuries, all but forgotten in 2020. (Except, of course, on Appellation Mountain!)

Another mystery from the past, multiple spellings of Alifair appear in the name data over the years.

Popular throughout much of Europe, spare and simple Aya claims both Arabic and Japanese roots.

A Latin American respelling of the English lady, as in the title.

A generation after Ferris Bueller’s Day Off, sleek Sloane has become a mainstream favorite.

A German favorite in the 1960s – and big elsewhere in Europe at the time – Sabine remains quietly underused in the US.

A gentle river name put on the list of possibilities by a Robert Burns poem.

An invented name from a forgettable movie, Evolet’s Eve-Violet mash-up might prove far more enduring than 10,000 BC.

It looks like a twist on Ava and Adeline, but Aveline traces back to at least the Middle Ages.

A familiar French choice, worn by a recently canonized saint, and a possible successor to Zoe.

Ella, Bella, Stella … why not Zella?

An Italian twist on traditional Alexandra.

A night sky name with an alluring sound.

A cheerful nickname for Christina or Katherine, or maybe even a bold given name.

Once an alternative to fast-rising Amelia, Emilia is nearly as popular now.

A spare and simple name that feels romantic and enchanting, too.

A vintage revival with two compelling meanings: faith and truth.

A Margaret nickname that now stands on its own.

A fast-rising Scottish import, boosted by Isla Fisher, as well as the name’s flowing sound.

An unexpected Susan nickname, forever tied to the holiday season thanks to It’s a Wonderful Life.

An all-but forgotten name from ancient Greece, until Australian break-out hit Miss Fisher’s Murder Mysteries made us all so very curious about the name.

An invented surname-style name with plenty of promise – and a great many potential spellings.

Another Margaret nickname, this one by way of Scotland, Maisie is following names like Millie and Daisy up the popularity charts.

The Netflix movie about Sherlock’s little sister brought the Holmes family to a new generation, and introduced the name Enola to a wider audience, too.

A gorgeous, dramatic flower name with a Southern vibe.

A stylish surname name poised to follow Harlow and Monroe.

While Tessa stands at #260, the even sparer Tess remains rare as a given name.

Yet another flower name possibility, this one made famous by Downton Abbey.

A fast-rising favorite with name fans, Sylvie is part-Sylvia, part-Sophie.

A color name that borrows sounds from both Ava and Ivy.

A mythological name new to the Top 1000, following Penelope up the charts.

It looks like a creative spin on masculine Noah, but Noa is a separate name, popular throughout the Western world. It’s all enough to make Noa the most popular pick on Appellation Mountain for

That’s it for the Top Girl Names 2020. Do you have any favorites on this list? 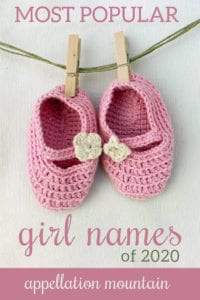