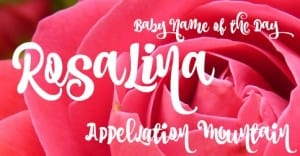 There’s no shortage of lovely Rose names. Today we’re featuring one of the rarer blooms.

Thanks to Brittany for suggesting a find from her family tree as our Baby Name of the Day, Rosalina.

There are several possible origins for this name.

What we do know is that it isn’t terribly common over the years – but neither is unknown. 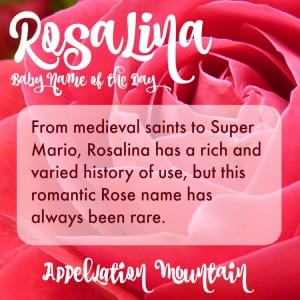 Let’s start in Palermo, with a Norman noblewoman who became the saint of the Italian city.

Also called Rosalia and Rusalia, the twelfth century saint lived as a hermit on a mountain outside of the city. When plague came to Palermo in the 1600s, it is said that Rosalina appeared to two different city residents, directing them where to find her bones. Following her instructions, the bones were found, brought into Palermo, and a procession held.

Legend has it that the plague immediately left the city.

Rosalina’s feast day is still celebrated every July 15th in Palermo, and a second event brings pilgrims to her mountain sanctuary in the Fall.

Let’s leave Italy behind for France. Also known as Rossolina and Roseline, this second saint by the name joined a religious order in 1288 in Provence. She would eventually serve as her order’s prioress. It’s said that she had prophetic visions prior to her death. Her shrine remains a place of pilgrimage, and the Roseline Chapel contains her relics. 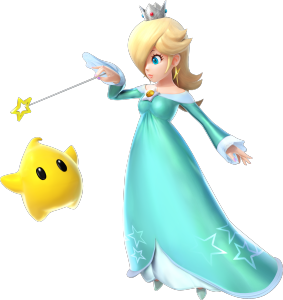 But if the name has attracted attention in recent years, we may have Super Mario to thank.

Known as Rosetta in the Japanese versions of the games, Rosalina made her debut in 2007’s Super Mario Galaxy.

In her appearance, Rosalina teams up with Mario to rescue Princess Peach. In return, Mario helps her re-power her Comet Observatory by collecting stars. She’s had plenty of adventures since then, and we’ve learned more of her backstory. She’s a compassionate character – and a popular one, too.

Or maybe you’ll think of The Naked Brothers Band, a mockumentary turned Nickelodeon series about a band of young rock stars. There’s a character on the show called Rosalina – and the band writes a hit song about her. You can listen to it here – it’s sweet.

Rosalina: By the Numbers

It must be the resurgence of the Rose names:

A few notable women have answered to the name – a Guatemalan human rights activist, a Filipino composer. Odds are that Rosalina simply fits in with the riot of Roses. All of the names listed above – with the exception of Rosemary – climbed between 2013 and 2014.

Overall, if you’re looking for a rare Rose name with ties to history and a romantic sound, Rosalina is one to consider.

What’s your favorite Rose name? Do you think Rosalina could catch on?