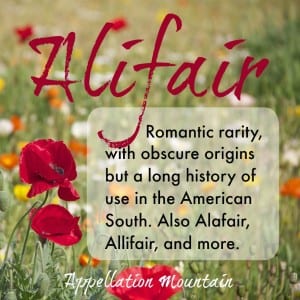 It sounds like a name from The Faerie Queene, or maybe Game of Thrones.

Only it isn’t.  Instead, this one is far more mysterious.

Thanks to Sarah for suggesting Alifair as our Baby Name of the Day.

Alifair and the Famous Feud

Back in the second half of the nineteenth century, two families on the West Virginia-Kentucky border found themselves at odds.

In any case, the Hatfields and the McCoys battled it out over several decades, and a dozen people lost their lives in the feud.

One of those victims was Alifair McCoy. The bloodiest night in the history of the feud became known as the New Year’s Night 1888 massacre. Members of the Hatfield family surrounded the McCoy’s cabin, while the family slept inside. They set fire to the cabin, and shot those who fled, including Alifair.

Alifair immediately feels vaguely familiar, probably because it looks a little bit like older forms of some well-established names:

Other theories abound, and here’s the thing: it wasn’t a one-off name.  There were dozens of women named Alifair, Allifair, Alafair, Elifaire, Ellafare, and other spellings of the name in the nineteenth century US, especially in the South.

Which leads me to suspect that it’s something like the equally mysterious Ladusky. Ladusky is a form of, believe it or not, Louise.  It was whispered down the alley from some form – now lost – into the more accessible Ladusky.  And then lost once more.

I went searching for ways that Alifair could have evolved from Adela or Alfreda, and I’ll admit – it’s a stretch.  There’s the concept of the intrusive ‘r’ in accents, of course. But I’m coming up blank on exactly how this one might have evolved.

The ill-fated Alifair McCoy is probably the best known bearer of the name, but she’s not the only one.  There’s also writer Alafair Burke is the daughter of James Lee Burke, also a crime novelist. Burke was named for a great-grandmother.

And, of course, Alifair surfaces on baby name websites.

But Alifair’s other strength is a mix of accessible pieces combined with an out-there feel.  Girls’ names from Alice to Allison to Alexandra make Ali- a familiar name element. And while -fair is incredibly unusual, we have a sense that “fair” means lovely, beautiful – putting it in the company of Bella and Jolie.

Spell it Ellafair and it becomes even more of a modern smoosh name.

If you’re after a wearable obscurity, Alifair is one to consider.

What do you think of Alifair? Which spelling do you like best?