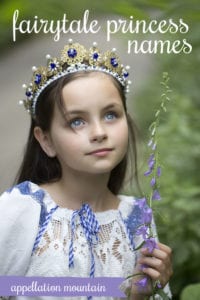 Fairytale princess names sound just right trying on a glass slipper or singing with animated blue birds in the forest. They’re romantic, exotic, and almost entirely unexpected. Because for every Belle, we can list names like Cinderella (or the French Cendrillon), Rapunzel, and Merida.

And if you move beyond Disney? There’s Buttercup from The Princess Bride, Eilonwy from Lloyd Alexander’s The Chronicles of Prydain, and, of course, Game of Thrones’ Daenerys.

So let’s say we were put in charge of naming a fictional princess. What would rise to the top of the list? I’d favor fairytale princess names that blend the medieval and the fanciful. Some names lean more romantic; others, adventurous. But that suits the range of modern princesses, from Elena to Mulan. So callbacks to an earlier time work, but so do bold, unexpected modern finds. And they have to span all of Europe – perhaps even the globe.

These are my dozen picks for fictional fairytale princess names.

It might be medieval variant of Elizabeth and Isabella, or maybe an old Germanic name. Either way, Belsante sounds right at home with Beauty and the Beast’s princess perfect Belle. And yet, the more elaborate form feels regal and throwback. Along the same lines, Isabeau seems like a name right at home in a medieval woodcut illustration.

Before Disney named Sleeping Beauty Aurora, the princess often answered to Briar Rose in tellings of her tale. Briar has that edgy, modern feel of modern nature names like Winter or Bay, but a long history of use in stories argues that it’s no novelty.

The first syllable probably comes from the Latin clarus, clear. Since fairy tale princess names are always noble and clear of purpose, any name related to Claire and company feels like a good fit.

Dulcinea is Don Quixote’s fictional maiden fair, derived from the Spanish dulce – sweet. Similar names were in use in medieval England, and 90s indie rockers Toad the Wet Sprocket gave the name to their hit 1994 album. It would make a logical pick for a princess. A similar sounding option is the ancient Drusilla, though Joss Whedon gave it to an evil vampire. Factor in Dulcinea’s meaning, and it’s tough to believe this name hasn’t been drawn in a ballgown and tiara yet.

It’s the Latin version of a name worn by a seventh-century Anglo-Saxon saint, also written as Everilda and Averil. If you’re anticipating a happy ending, what’s better than having the word “ever” in your given name?

The masculine form of this name was born by another seventh-century saint. Ghislaine shares the same roots as Giselle, worn by Amy Adams in Happily Ever After. The pronunciation would be something like jheez LANE – tough, but in our era of Genevieve, not unthinkable. Another G-name that comes to mind? The saintly Godlieve, but that pronunciation feels even less accessible.

Jasmine found a whole new world with Aladdin. Why not this more elaborate form? It sounds both modern and old school at once, as does related name Jessamine.

Not every fairy tale name is frilly, and this Northern European short form of Katherine feels like one you might find in a Swedish fairy tale. The elaboration Katrinka also feels at home in an other-worldly story, one with plenty of ice and snow.

Best for a Slavic character, of course, but there’s no shortage of those. Like a few other names on this list, she’s a relatively modern innovation, coined for an 1813 poem. But her meaning – from svet, light – is princess-perfect.

You might expect Thalassa to be the evil stepsister or faithful servant instead of the romantic lead. But Thalassa is a primordial Greek goddess of the oceans, making it every bit as seaworthy as the red-headed Ariel.

Most gemstone names feel fairly mainstream, from Ruby to Pearl. But Tourmaline – first brought to Europe by the Dutch East India Company – is seldom heard. The word wasn’t used in English until the mid-1700s, so perhaps Tourmaline would be out of place in a story set in the Middle Ages. But it still feels rich with poential.

One of the Jolie-Pitt twins and a name sometimes used in Arthurian legend for the Lady of the Lake, Vivienne is, far and away, the most popular name on this list. But there’s something powerful about names derived from the Latin vivus – alive.

Those are my dozen picks for fairytale princess names. What would you name a fictional character destined for a crown? And do any of these work for a real girl, too? 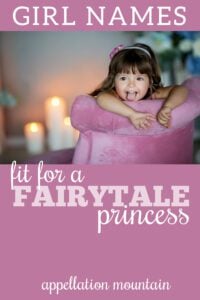 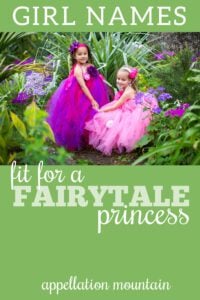