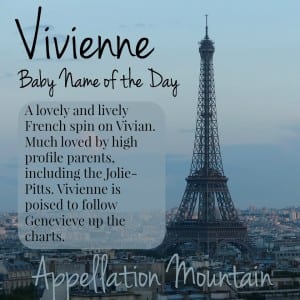 Inspired by Appellation Mountain’s most popular Pinterest pins, our Baby Name of the Day is Vivienne.

Vivian is often cited as an early stolen-from-the-boys name, but that’s not quite right. All of the names in this family come from the Latin vivere – to live. Words like vivacious, vivid, and vital all have vivere on their family trees, too.

There was a fifth century Saint Vivianus, and forms of the name have been in use for centuries, including the feminine Viviana.

Tennyson gave the name Vivian or Viviane to a wily schemer in his re-telling of Arthurian legend, and there’s an Irish goddess whose name is often Anglicized as Vivian. So there’s a long history of Vivian as a unisex name.

In French, the name became Vivienne, in contrast to the masculine Vivien.

The emphasis is a little different when most people say it: viv ee EHN versus viv EE an.

In the US, the -enne spelling was a sleeper.

Today, the story is very different, and that’s all thanks to a 2008 birth announcement.

Angelina Jolie and Brad Pitt welcomed twins in July 2008: Knox Leon and Vivienne Marcheline. The children were born in France, perhaps explaining the French influence. (Though they’ve said that Vivienne was a name that just came to them, early in the pregnancy.)

Since then, other high-profile birth announcements have included:

And, of course, Rosie O’Donnell was actually the mother of a Vivienne Rose all the way back in 2002.

Vivian feels like a practical name, while Vivienne shimmers with a certain style.

Some of the credit for Vivienne’s stylish vibe goes to Vivienne Westwood. A punk rock fashion pioneer, Westwood has gone from a shop on the King’s Road in 1970s London to international couture, dressing princesses, Hollywood stars, fellow fashionista Gwen Stefani, and the cast of Sex and the City. (In the first film adaptation, Carrie falls for a Vivienne Westwood wedding gown during a photo shoot for Vogue.)

Westwood is also a well-known activist and advocate of the arts.

That’s not to say that Vivian can’t sparkle. Both names share the lively nicknames Viv and Vivi.

But American parents do tend to fall for French names, and Vivienne seems poised to follow Genevieve up the charts.

Meanwhile in France, Vivienne remains in style limbo – the name peaked back in the 1930s.

While Vivian is consistently the more popular spelling, the -enne version is rising quickly. Even though the Jolie-Pitts were the ones to push Vivienne into broader use, this name doesn’t feel like a trendy choice. Instead, Vivienne feels elegant, restrained, and feminine – and not too widely used, at least for now.

What do you think of Vivienne? Do you prefer the -enne spelling, or are you partial to Vivian? (Or Vivien, Viviane, or Viviana?)