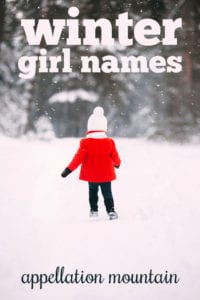 Winter girl names range from the obvious – think weather – to the subtle – like names that mean white.

Some boast centuries of use and broad familiarity; others are novel and seldom heard. And a few fall somewhere between, the new nature names right at-home in the twenty-first century, wintry equivalents of River and Meadow.

Nature names rule the day, but a handful of favorites from literature and other sources make great winter girl names, too.

Because regardless of their history or origin, what they share is this: a sense of the beauty of the winter season and a celebration of all that it brings.

If you’re expecting a winter daughter, or if you’ve always loved cold and snow, these 25 winter girl names might make ideal first or middles – or even both – for a daughter.

The 49th state has four seasons, just like everywhere else on Earth – but for much of Alaska, it looks rather wintry more often than not. It feels rugged, but also surprisingly pretty. The name comes from an Aleut phrase meaning “object to which the action of the sea is directed.” The Russians first used it back in the eighteenth century, and it stuck. As a given name, Alaska is rare. Russian-born model Anne V. gave the name to a daughter in 2015.

Amaryllis plants are associated with Christmas for at least two reasons. First, they come in red and white, a candy cane-color pattern suited for the season. But legend adds more. One story claims that Joseph was chosen to marry Mary after his shepherd’s staff grew amaryllis flowers. The name carries a seasonal meaning, too – “to sparkle,” from the name of a shepherdess in Virgil’s writings. With bold botanicals very much in vogue, Amaryllis fits right in.

Winter isn’t all Christmas, of course. Amethyst serves as February’s birthstone. The pretty purple gem is a form of quartz, used in jewelry as far back as ancient Egypt. The Greeks believed it could prevent drunkenness, and the name means precisely that – not intoxicated. There’s a sixteenth century French poem about a maiden named Amethyste, who avoids the affections of – who else? – Bacchus, god of wine.

We tend to think of Arwen as Elrond’s elfin princess daughter in Lord of the Rings, played by Liv Tyler in the movies. In Welsh, the familiar -wen ending means fair or white. It’s among the most subtle of winter names for girls, but one that blends fantasy and the gorgeousness of winter.

Aspen qualifies as a  tree name, but it’s also a famous Colorado ski resort. That makes for lots of snowy imagery. But Aspen isn’t just about the slopes; it’s a glitzy tourist destination, where you can buy Gucci on the main drag. Despite the town’s affluence, Aspen remains a seasonal, wintry choice.

Literary Bianca was twice-used by Shakespeare. But it makes this list, because, like Blanca and Blanche, it means white. The Italian name took an international, glamorous turn in the 1970s thanks to model Bianca Jagger. The name remains familiar, but relatively uncommon.

Love short names big on vowel sounds? Consider Eira, the Welsh word for snow. I’ve heard it pronounced like the masculine name Ira, as well with a long a – Ayra, and also like Air-ah. Other meanings, origins, and pronunciations are possible, too. It feels thoroughly modern and quite seasonal.

Another Welsh name, Eirwen combines snow with gwen – white. Pronunciation is a little tricky. In American English, I think air-wen probably comes closest, but I’ve heard ay-er-wen, too – and I think might be prettier. It’s a gorgeous middle for a winter daughter, and a bold first name choice.

Not so long ago, Elsa was a familiar, but seldom heard, form of Elizabeth. Then came Frozen. Loosely based on the Snow Queen, in the Disney blockbuster gives her magical powers that send her kingdom into perpetual winter. All ends well, but the name has faltered as the character has become ubiquitous. Now that there’s an Elsa on 1838, the prequel to hit series Yellowstone, maybe that will change.

Reverse the sounds in chart-topping Sophia, and it’s almost Fiona. A poetic invention, Fiona comes from the same roots as Finn, and shares the same meaning: white or fair. Today’s parents might also think of the Shrek character, or they might love it just for the spirited, vibrant sound.

Names inspired by the color red are wildly popular, thanks to Scarlett and Ruby. Gemstone names, too. So why not Garnet? The traditional birthstone for January takes its name from a Middle English word meaning “deep red” – though the stones come in other colors. Bonus? It works for boys, too.

The British call any vacation a holiday, but in the US, our happy holidays fall in the winter. In Truman Capote’s Breakfast at Tiffany’s, Holly Golightly was actually Holiday. Actor Holliday Grainger makes it familiar to a new generation. It means “holy day,” but doesn’t seem especially religious by twenty-first century standards.

It’s a powerful symbol from the Druids to the Christians to today. Holly represented truth in medieval heraldry. Harry Potter’s wand was made from holly. You’d expect Holly to be a hit – and it was, in the 1970s. But it still has plenty of appeal for a daughter born during the winter.

Ivy is the new Holly, except they’ve always been a matched set. Most modern parents probably like Holly for its mini-name qualities, and the middle ‘v’ of Ava and other stylish picks. But it’s a solid seasonal choice, too, and among the most popular of the winter girl names on this list.

We say yes to April, May, June, but skip the wintry months. But January Jones made this possibility familiar; the actor’s name came from a Jacqueline Susann novel. It fits with three-syllable, ends-in-y names for girls from Emily to Avery, and sounds exactly right for a daughter born during the winter season.

Lumi comes from the Finnish word for snow, but sounds like lumen, the Latin word for light. It also brings to mind Lucy and Luna, too. It’s almost completely unheard of in the US, but it seems like a promising possibility. After all, I assume the Finns know quite a lot about snow.

Ever since a young Natalie Wood – born Natalia – became a household name in the 1950s, this name has been a favorite. It’s ranked in the US Top 100 since the 70s. It comes from the Latin phrase natale domini – Christmas Day. But I think that still makes it nicely wintry for a daughter born later in the season.

Short, tailored, and sharp, Neve claims several possible origins. But in Portuguese it means snow, and Nevada comes from a Spanish phrase meaning snow-covered. This wintry Neve rhymes with Bev, as in actor Neve Campbell, while the Irish Niamh rhymes with Eve.

Like Natalie, this name literally means Christmas. It’s a go-to middle name choice, and steadily popular as a girls’ given name in recent decades, too. Disney Plus introduced a Christmas movie starring Anna Kendrick called Noelle in 2019, making the connection even stronger. It makes for a warm and wintry choice.

Sure, it’s a Kardashian name, and that might be a strike against it. But North also feels like a virtue name – think of phrases like true north. And, thanks to the North Pole, there’s no question that North brings to mind winter weather and the end-of-year holidays.

A short name with a big sound, Snow might be better suited as a bold middle. But it’s a Disney princess name, and if we can name our daughters after Ariel and Jasmine, why not the poison-apple-eating Snow White? It’s a daring nature name, not so very different from Rain.

Sylvie means forest, but it makes this list for another reason. St. Sylvester’s Day falls on December 31st, and in some European countries, Sylvester means New Year’s Eve. That makes Sylvie the most subtle of winter names for girls. But it could be yet another reason to consider this rising choice.

Valentina, Valentino, and Valentin are familiar. But Valentine – as in the saint celebrated on February 14th – seems most clearly tied to the season. While we think of romance when we hear this name, it actually means healthy or strong, from the Latin valens. It’s worth noting, however, that Valentina is a Top 100 favorite.

No list of winter girl names would be complete without the most obvious pick: Winter. Autumn and Summer have been big for ages. But Winter comes with vintage nickname Winnie built-in, and that stylish -r ending. If this is your favorite season, then there’s reason aplenty to consider it for a child’s name.

Paperwhites bloom indoors from late fall to early spring; fragrant, snow white, and easy-to-grow, they’re one of winter’s joys. Ziva refers to one of the most common varieties. It’s not clear how the flowers got their name, but in Hebrew, Ziva means radiance – and is established as a given name.

What are your favorite winter girl names? Are there any I’ve missed? Any you might consider? 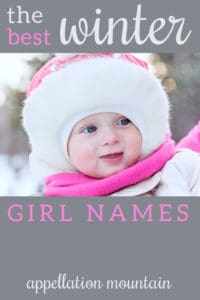 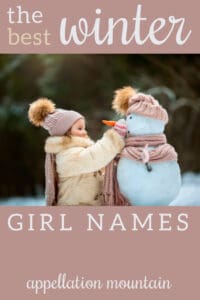