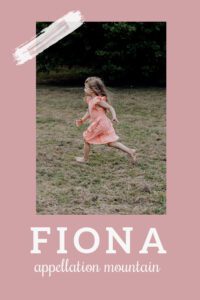 The baby name Fiona blends literary roots with an appealing sound for a name that hits the sweet spot – stylish, current, but not too common.

Back in the eighteenth century, the Scottish writer James Macpherson claimed he’d discovered and interpreted a collection of old legends.

He created a wildly popular series of writings, starting with Fragments of ancient poetry, collected in the Highlands of Scotland, and translated from the Gaelic or Erse language.

Despite the ring of authenticity, evidence suggests that Macpherson invented pretty much, well, most of it.

Debates about the stories’ origins raged, even as Macpherson’s work became an international sensation, widely read and translated into many European languages.

One of his likely inventions? The baby name Fiona.

That makes the baby name Fiona a feminine form of Finn.

It joins older names. Irish myth gives us Fionnuala -“white shoulder.” We usually Anglicize it as Finola or Fenella, but it’s a sister to Finn, too.

So even if Macpherson was the first to use this exact name, it seems fair to call the baby name Fiona Irish. Or at least Irishish.

Despite the success of Macpherson’s writings, the baby name Fiona didn’t catch on.

A few surface in the US Census records. But it’s not until 1942 that Fiona debuts in the US Social Security Administration data set, with nine births.

What happened along the way?

First, musical Brigadoon gave the name to a resident of a mysterious, unchanging Scottish village that appears to outsiders for only one day every century. Two visitors from New York stumble upon the village, and set events in motion. The musical debuted in 1947, with a film adaptation ten years later, and a television movie in the 1960s.

In 1965’s Thunderball, James Bond faced a glamorous assassin named Fiona Volpe. Things end badly for Volpe, though there’s a tiny uptick in the name’s use in the US during 1966 and 1967.

Then came Colleen McCullough’s bestselling novel, The Thorn Birds. A family drama spanning the 1910s to the 1960s, Fiona “Fee” Cleary is the mother of the main character. The novel was published in 1977, and a smash hit television miniseries followed in 1983.

Like Thunderball, The Thorn Birds gave the baby name Fiona a tiny bump – but not enough to take it mainstream.

THE GIVER and SHREK

It’s one of the ahead-of-curve character names in Lois Lowry’s celebrated 1993 young adult novel The Giver. (There’s also an Asher.)

1994 British romcom Four Weddings and a Funeral includes an aristocratic Fiona. That tracks – the name was long more popular in the UK than the US.

Singer Fiona Apple burst on to the scene around the same time, earning a Grammy in 1998 for her first hit song, “Criminal.”

Like any respectable fairytale, there’s a princess, voiced by Cameron Diaz.

But this one had a secret: by night, she turned into an ogre.

Only true love’s kiss can restore her permanently to her true form. When she marries the ogre Shrek, it turns out that she’s meant to be an ogress. She goes green full-time and they live happily ever after.

Or, at least as happily as the continuing Shrek saga will permit.

By 2010, when the fourth feature film installment, Shrek Forever After, was released, the name had reached #258.

Showtime series Shameless gave us Emmy Rossum as Fiona Gallagher for nine seasons. (An eleventh – and final season – ended in 2021, but Rossum’s character moved on earlier.)

Pop culture references come and go, while the baby name Fiona continues to quietly appeal. For most of the twenty-first century, the name ranges in popularity from the upper 100s to the lower 300s.

Everybody recognizes it, but it’s far from overused, a great alternative to perpetual favorite Sophia.

It feels vaguely Irish or English, and it brings to mind all sorts of pop culture references, but it’s tough to pigeon hole.

The name carries plenty of contradictions: it’s an unconventional princess name, one borrowed from myth and legend, but also something of an invention.

Overall, the baby name Fiona could be a great choice for parents after something traditional with just the tiniest bit of an edge. Fiona sounds fearless, a strong name with plenty of twenty-first century energy and just enough history to anchor it in the past, too.

What do you think of the baby name Fiona? 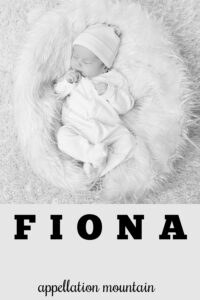