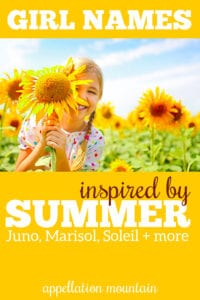 Summer girl names celebrate the season. They’re relaxed and casual, at-home in flip flops and a swimsuit. And they feel warm, too – sun-kissed.

But beyond that broad style, there’s a surprising range. Some summer girl names lean vintage. Others are high-energy and modern. Changing just a syllable – or even a single letter – can transform a name’s entire vibe.

Are summer girl names just for daughters born between June and August? Not at all! If this is your favorite season, these can be spectacular choices – even in the cold of winter. In fact, if you’ve welcomed a child in the middle of a blizzard, there’s something delightfully optimistic about naming her Soleil.

And, of course, if you’re in the Southern Hemisphere? This list isn’t quite as helpful, since your summer doesn’t match up with the same calendar. But many of these would still be great choices for a daughter born at any time of year.

The most famous mermaid of all, Disney’s red-headed superstar makes this name summery. The elaborate Ariella is more popular still, and Arielle also ranks in the current US Top 1000, as does Ariel for the boys.

Month names usually feel unisex. And while August has years and years of history for boys, it also feels like a logical choice in a world with kids answering to January and Mae.

A blue name that brings to mind the sea and sky.

A logical alternative to River.

We love Caroline and Coraline, but it’s just Coral that feels most connected to the sea and summertime. It’s the name of Nemo’s clownfish mother in the Disney-Pixar hit, but Coral hasn’t made the US Top 1000 since the early 1990s.

A showy, summery flower, Dahlias bloom in full sunlight early in the season. It’s a delicate, vintage name with lots of style.

We name our children Juliet and Julian, but just July is rich with potential.

June peaked in the 1920s – and a century later, it’s rising through the rankings one more. Equal parts high energy and demure, gentle June is all things summer.

The goddess who gave the month of June it’s name, Juno is a punchier alternative.

Like so many nature names, Lake isn’t exclusive to summer by any means. But for anyone who grew up swimming and boating on a lake all summer, this might seem like the right season to consider it. (Though if ice skating is your thing? Maybe this fits with the winter girl names instead!)

Children born from late July through August claim the star sign Leo. And while astrology might not predict your child’s personality or fate, it could inform their name. Leonie is one of the most current of the feminine Leo name possibilities, but Leona, Leontine, and Leola are others.

A patriotic virtue name that doesn’t necessarily key to summer, it still fits. After all, we celebrate Independence Day – the Fourth of July – at the height of summer, complete with fireworks over the Statue of Liberty.

Back to astrology for more inspiration! Children born from late June through much of July are under the sign of Cancer – the crab. Neither of those seems like obvious naming inspiration. But the planet associated with Cancer is the moon. That opens up plentiful options – including current favorite Luna.

Margaret means pearl, and the pearl is June’s birthstone. (Fun fact: so is moonstone! Which takes us back to Luna …) But if you’re after a classic name for a summer-born daughter, Margaret offers the most subtle connection.

Another option from the Margaret family? Vibrant and creative Margot, of course! While this list could also include Maggie, Greta, and a dozen other choices, Margot seems like one of the most current choices.

While you can find marigolds blooming in gardens across the seasons, they’re cheerful, bright, and thrive in sunlight. That – plus the “gold” syllable – make this sound like one of the obvious summer girl names.

Strictly speaking, Marisol comes from MarÍa de Soledad – Our Lady of Solitude, a title Catholics give to the Virgin Mary. But it looks like mar y sol – sea and sun – which makes it a perfectly seasonal possibility.

One of many Japanese names meaning summer, Natsumi might be too much for a family without Japanese heritage. However, the syllable “na” refers to summer. Mona might be a more cross-cultural possibility.

Océane was big with French-speaking parents around the turn of the twenty-first century. It’s pronounced aw seh ahn. But Ocean never really caught on in English – until now. In 2020, over 200 girls were named Ocean, along with nearly 300 boys – enough to put it into the Top 1000 for the first time.

The birthstone for June, and an elegant choice for a daughter.

A gemstone name that no one is using, Peridot could be a dramatic – and just plain fun! – alternative to Ruby.

The Spanish form of Pearl, for something just slightly different.

A bright red flower, Poppy is associated with the summer month of August.

While no one would assume your Rose is born in June, it is the month’s birth flower.

July’s vivid red birthstone, and a popular choice for a daughter.

Like Luna, Selena means moon. It comes from a Greek goddess, often identified with Artemis. While the goddess is relatively obscure, the meaning is clear – and, thanks to astrology, clearly linked to all things summer.

Remember Marisol? Solange is similar. It comes from a Latin name, Sollemnia – religious. (Think our word solemn.) But it looks like sol – sun – and ange – angel. So folk etymology puts this stunning French name on our list of summer girl names.

The French word for summer, pronounced SO LAY. It’s potentially challenging for American English speakers, but the appealing sound might be worth it.

One of several season names in the current US Top 1000 for girls, Summer is well-established as a choice for a daughter.

Legend has it that Sunniva was a medieval princess, forced to flee an unwanted suitor. She landed in Norway with her followers, but their pagan king didn’t want Christians on his land. They all died martyrs. So … not exactly a fairy tale, but the name’s sound is sharp and appealing. And the meaning is even better: sun gift.

A straight-up word name, Sunny might be short for a longer name, like Susanna. But it’s just Sunny that has ranked in the girls’ US Top 1000 since 2017.

The Finnish word for summer, an unconventional choice that fits with Ruby and Lucy, Ivy and Ava.

There’s more than one possible meaning and root for Teresa, but they’re all Greek. And one of them – the word theros – means summer. While it’s also spelled Theresa, the no-h version is the most popular at the moment.

Not so long ago, Tess was a nickname for Theresa. But these days, Tessa stands on its own – far more popular than any of the formal versions. But it still carries the same, summery meaning.

Vera has two well-known and appealing meanings: faith, from Slavic, and truth, from Latin. But in Albanian, Vera means summer.

A place name probably referring to brushwood, Waverly makes this list because of the first syllable. It doesn’t get much more high summer than waves at the beach.

Another bright and vibrant flower that flourishes in the summertime.

So break out the sunscreen, take me out to the ballpark and maybe consider one of these choices for your summer-born daughter.

What are your favorite summer girl names? 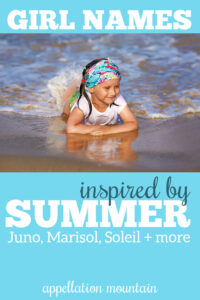 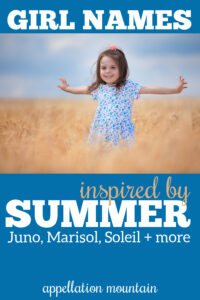