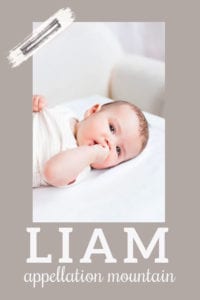 The baby name Liam has held the top spot in the US for three years running. Not bad for a name nearly unknown on these shores before the 1970s.

William conquered England in 1066 with the Normans. His name came along, and then traveled to Ireland. Spellings included William and Uilleam and plenty of others, too.

It is possible that the last two syllables were lopped off early and used as a nickname for centuries, but it’s hard to trace.

What we know is that Liam rarely appears as an independent name until far more recently. In the US, the first year we find five or more boys given the name is 1947. Compared to William’s long history, that’s yesterday.

A handful of notable men by the name are found in the history books and pop culture, including a prime minister of Ireland in the 1970s and one of the internationally successful folk group, the Clancy Brothers.

By the 1960s, of course, the first wave of Irish imports had raced up the charts. Kevin and Brian led the way, with Ryan close behind. They became every-guy names over the next few decades, until we all-but forgot their Irish origins.

Much of the credit goes to Irish actor Liam Neeson, known for action roles as well as serious, Oscar-worthy performances. He became a household name in 1993, playing the title role in Schindler’s List, and his given name jumped nearly 200 places in the US rankings.

By the time Neeson played a Jedi Knight in the first installment of the Star Wars prequel trilogy in 1999, the name ranked in the Top 150. As the star turned in more and more blockbuster performances, the name continued to gain.

By 2006, the name reached the US Top 100. One year later, actor-turned-reality TV personality Tori Spelling chose the baby name Liam for her firstborn. She chronicled much of his early life on her reality shows with husband Dean McDermott.

In 2008, the rebooted version of 90210 – the show that made Tori a star – included a character by the name. Lost did, too. And then came 2011’s Teen Wolf, which introduced a werewolf by the name in a later season.

Australian actor Liam Hemsworth – born in 1990 – raised the name’s profile, too. Among other favorites, he starred as Gale in the Hunger Games franchise.

And it’s tough to overstate the impact of boy band One Direction, who became international sensations in 2011 – while still in their teens. One of their members? Liam Payne, who has since embarked on a successful solo career, just like Harry, Zayn, Louis, and Niall.

All of this puts the baby name Liam at the intersection. It’s part-classic William, part-Irish charmer, and part-pop culture sensation.

No surprise it climbed into the US Top Ten in 2012.

But there’s one more factor that helped take it to #1.

Add up all of the influences, and it comes as no surprise that the name has soared to #2 in the US.

The name appeals – in serious numbers – to Spanish-speaking parents, too.

BabyCenter en Español’s reports that the baby name Liam sits at #5, right behind more conventionally Spanish choices Mateo, Santiago, Matias, and Sebastian. Given how many families speak Spanish in the US, it’s tough to imagine a #1 name that doesn’t appeal across both languages.

The baby name Liam offers an upbeat, charming sound. It’s modern but with roots, and feels like an Irish heritage pick and an international traveler.

The name’s only drawback is that plenty of parents have discovered this name’s considerable appeal.

What do you think of the baby name Liam?