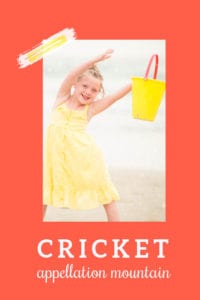 The baby name Cricket made headlines when Busy Philips chose it for her daughter in 2013.

But is it a crazy, celebrity-only pick, or a rising favorite?

Thanks to Grey for suggesting our Baby Name of the Day.

The baby name Cricket has a great sound. That crisp ‘Cr’ at the top, the stylish -et girl ending.

But, of course, the name instantly brings to mind an insect.

Cricket comes from the French criquer – to creak, to crackle.  It’s an onomatopoeic choice. Like roar and meow, the creature’s name comes from the associated sound.

We tend to lump grasshoppers, katydids, and crickets together as the more approachable of the insects, along with ladybugs and butterflies. True crickets belong to the family Gryllidae, and with their antennae and those big jumping legs, they are insects – even if they’re pretty much harmless to humans, and their night-time chirping is a gentle reminder of summer nights.

WISH UPON A STAR

In some cultures, the appearance of a cricket is a good omen. In others, it’s best to escort them out of your house as they can herald illness, even death.  There’s a history of keeping them as pets, and even staging cricket fights.  They are also edible, and you just might find them on the menu.

Collodi invented “Il Grilo Parlante” – the talking cricket – for the story, but back in 1883, the character played only a minor role.

In 1940, Disney expanded the character, gave him a name, and made him Pinocchio’s wise companion.

And, of course, he sings “When You Wish Upon a Star,” one of the most iconic songs of the twentieth century.

As for the name, “Jiminy Crickets” started out as a mild oath, a not-quite-swear. Dorothy says it in The Wizard of Oz. The seven dwarves said it in the Snow White movie, released by Disney just a year prior.

1961 Newberry Honor Book The Cricket in Times Square was about the adventures of Chester Cricket.

It’s also a sport, of course. The word comes from a Middle Dutch word cricke – stick and the French criquet – piece of wood.

Cricket is also slang for a harmonica, and Buddy Holly’s back-up band was called The Crickets.  This almost puts Cricket in the company of Harmony, Aria and Drummer – if the musical meaning were more widely known.

The baby name Cricket has seen more use than you might guess:

What explains the ups and downs?

From 1959 through 1963, actor Connie Stevens starred on detective series Hawaiian Eye. A pair of private investigators untangled all sorts of goings-on in Honolulu, mostly at a local hotel. Stevens played photographer Cricket, also frequently on site at the hotel, and an assistant to the duo as they caught the bad guys and kept the island safe for visitors.

In 1983, soap opera The Young and the Restless introduced a teen model named Cricket. The character eventually grew up, became a lawyer, and district attorney. She shed her childhood nickname along the way, and answered to Christine instead.

That seemed like an explanation for the 1980s Crickets, except the soap opera introduced the character a year after the name’s peak.

It was a good moment for outlandish nicknames, too. The Preppy Handbook, published in 1980, told the world all about Muffy and Corkie and Biff and Trip. The names are all over 80s pop culture, from Murphy Brown to Back to the Future.

The soap opera character’s name could easily reflect pop culture, rather than driving it.

It’s not just Christine, though. It’s easy to imagine Cricket as a nickname for any hard-C first with classic style: Catherine and Caroline seem obvious possibilities.

Of course, that includes Christopher, Christian, and other boy names, taking Cricket into unisex territory.

We’re borrowing baby names from birds in big numbers. After all, Busy Philips named her firstborn Birdie Leigh. Animals, like Bear and Fox, are trending, too.

This makes the baby name Cricket seem more wearable than ever.

If you love nature names, and like the upbeat, energetic vibe of Cricket, this might be one to consider.

What do you think of the baby name Cricket? Is it better as a nickname? Or would you use it as a formal name for a child?

First published December 10, 2013, this post was revised substantially and re-published on August 9, 2020.