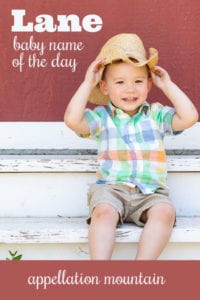 Lane brings to mind winding country paths, quaint village streets, and a growing number of people by the name.

Today’s post feature one of the Sweet Spot Boy Names as our Baby Name of the Day.

Lane means exactly what you think it does: a road or a marked track. It’s Old English in origin, with similar words in Dutch and Old Norse and so on.

Originally, it probably belonged to someone who lived on a narrow way, snug between hedges or fences or rows of other houses, a surname in the key of Hill or Lake.

But it might claim other roots. It could substitute for Irish names meaning spear or warrior or even the color gray.

At first glance, Laine looks like an attempt to make the name more feminine. Or just fancier. But it can also hint at separate origins.

In French, the surname Laine refers to someone who wove or sold wool, ultimately from the Latin word lana.

And in Finnish, it means wave. NHL player Patrik Laine might come to mind; his surname is pronounced more like ly-nay.

Of course, you might also add a y: Layne.

Nearly any English surname saw some use in the US, thanks to our habit of handing them down as given names. But the numbers were tiny in the late nineteenth century, when American data is first available – five or six boys, tops.

Layne first appears in the data in the 1920s, and remains consistently more popular for boys. Only Laine trends feminine, used for around 100 girls in 2018, about double the number of boys.

Over the years, as it has gained in use, a handful of notable Lanes have shaped the name’s image.

If you hear this name and think west, that’s no accident. Robert Chandler Oakes really was the son of a Montana rancher. By the 1920s, he’d arrived in Hollywood, where his real life skills earned him bit parts in Westerns. He graduated to leading man status, using the professional name Lane Chandler.

Chandler’s movie career faded in the 1930s, but revived with a series of roles in television Westerns through the 1960s.

That means lots of us would have seen the name associated with all things cowboy.

Then along came Lane Frost – that’s his real name – a ProRodeo Hall of Famer. He died following an accident in 1989, at the age of just twenty-five. His life inspired the 1994 biopic 8 Seconds. A number of songs have been written in his memory, and within the world of rodeo, it’s a familiar name.

A few years ago, Flowing Data dubbed Lane one of the most regional names in the US – and you can see on their maps, it’s most popular in the middle of the country, in places where I can imagine rodeo might be far more familiar than, say, Los Angeles or Atlanta.

At the same time, I suspect the name may have spread beyond its original region. It still appears in the US Top 100 of two states; it’s #85 in North Dakota and #52 in South Dakota. But just over 1,200 boys received the name in 2018, and the Dakotas only account for 35 of them.

Another possible reason for the name’s spread: Mad Men made the name English. Or at least, it gave the name to Lane Pryce, a character introduced in the third season. He’s a newcomer to the United States, arriving from London in the third season, which first aired in late 2009.

There’s also Downton Abbey’s Mabel Lane Fox, referred to as Miss Lane Fox. She first appears in 2014. The character points to another aspect of the name.

Along the way, we started to meet a handful of girl Lanes. It’s no twenty-first century phenomenon, either; they appear in the data from the early 1900s onward.

And why not? We’ve been following the adventures of Lois Lane in Superman for ages. The Beatles’ “Penny Lane” is about a place, not a person. But in 2000’s Almost Famous, Kate Hudson played a character by the name. Later that year, the world tuned in to the fabulously named characters of Stars Hollow on Gilmore Girls, including Rory’s BFF, Lane Kim.

Plus, it fits with Paige and Brooke and other tailored names we’ve come to hear as feminine enough, a new generation’s updates to Kate and Jane.

Despite the many girls borrowing Lane, it’s remained solidly masculine in the US.

And while it’s risen and fallen slightly over the years, it’s held remarkably steady for the past two decades.

All of this makes it a sweet spot name for a son. It’s less new-agey than Journey, but more modern than Nate or Jake; a little bit Western, but not as bold as Maverick.

And that’s where the name stands today: a solid staple for a boy, familiar and with a vaguely traditional feel, but leaning modern at the same time.

What do you think of Lane? Do you prefer one of the other spellings? Or do you like this name better for a girl? 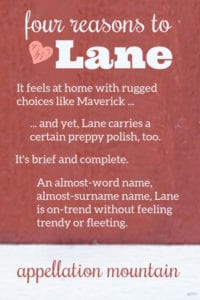