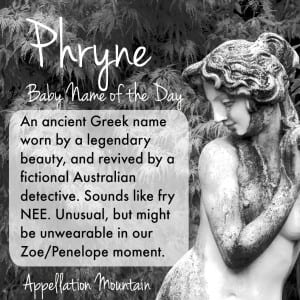 This name comes to us from Ancient Greece by way of Australia.

Thanks to several for suggesting Phryne as our Baby Name of the Day.

The first time I saw Phryne, I thought it was an oddball respelling of nature name Fern.

Phryne is pronounced fry NEE. It’s an Ancient Greek name, a cousin to Chloe and Penelope.

And yet, the two names do have a few things in common: they’re both nature names, and they’re both associated with the earlier years of the twentieth century. Fern was most popular in the 1910s and 20s, when a certain Miss Fisher was getting her start.

Phryne’s father was a distant relation of an English lord, but the Fisher family lived in modest circumstances in Melbourne. Then all of the male heirs died during the first World War, and suddenly, Mr. Fisher inherited the family title and fortune.

The stories begin in 1928, when 28 year old Miss Fisher has just returned to her native Australia. She’s tremendously stylish, good with a gun, and, unlike many women of her era, can fly a plane, drive a car, and hold her liquor. She has a loyal maid called Dot, a disapproving Aunt Prudence, and a host of other helpers and friends. We later learn that Miss Fisher served as a nurse in France during the war – which reminds me of another rags-to-riches female detective from the same era, though one considerably less flamboyant, Maisie Dobbs.

So where did the fabulous Miss Fisher get her unusual name?

From a courtesan in the fourth century BC, of course.

Phryne was a nickname. It means toad. That doesn’t sound terribly flattering, but apparently she wasn’t the only courtesan given the nickname. It referred to her skin tone.

Legend has it that she was a great beauty, and that at least one sculpture of Aphrodite was based on her image, while another statue of Phryne herself stood in the temple of Delphi.

Here’s the thing about courtesans in Ancient Greece. Hetairai were well-educated and could be quite influential. They could also amass fortunes of their own, as it seems Phryne did. It’s said that she once offered to restore the destroyed walls of Thebes if she could have her name engraved upon them. (The timing makes this almost certainly false.)

We do know that Phryne stood trial for impiety, though it isn’t certain exactly what that means. She was acquitted of the crime. Some accounts say that she disrobed in the courtroom, and her beauty moved the jurors to find her innocent. It’s a scene often depicted in art.

Speaking of art, Phryne was a favorite subject over the centuries.

There was also an 1893 opera by Camille Saint-Saens, plenty of references to her in literature, and  even an asteroid named in her honor, discovered back in 1933.

But are there any real women named Phryne? Miss Fisher is a larger-than-life character. Her fictional sister is named Jane, so I’m not certain how her parents landed on such a distinctive name for one of their daughters.

The books are now a television series made by the Australian Broadcasting Corporation. (And currently on Netflix. Ask me how I know!) The lovely Essie Davis plays the title role. So it wouldn’t be a surprise to run into others who are familiar with Phryne.

While the 1940 US Census turns up a handful of women by the name, this one is rare, rare, rare. Phyrne has never been given to as many as five girls in a single year – meaning that the name is effectively unlisted by the US Social Security Administration.

Perhaps Phryne would fare better in Australia, where the success of the books and the television series might make this one more familiar.

Overall, though, it’s a fascinating name, and one that deserves to be better known.

What do you think of Phryne? Is it wearable?