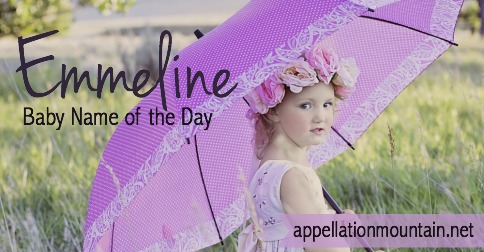 Emmeline takes favorites like Emily and Emma, and gives it a  sweetly vintage, slightly tailored twist.

Thanks to Alicia for suggesting our Baby Name of the Day.

Strictly speaking, Emma developed as a diminutive of the Germanic Ermentrude, or any of the many names starting with Ermen-, which means strong.

Emily, on the other hand, is cousin to Aemilius, a Roman family name meaning rival.

Here’s where it gets interesting – Emily was first introduced to English-speakers when it was used as the English form of Amelia. That’s because of the German-born daughter of the German-born King George II of Great Britain, Princess Amelia Sophia Eleanor.

But Emily isn’t a form of Amelia at all, and Amelia doesn’t come from Aemilius, though it looks like it could.

Instead, Amelia comes from the Germanic element amal – work. Amelina is a diminutive for Amelia. Whisper it down the alley, and you’ll arrive at our Baby Name of the Day. 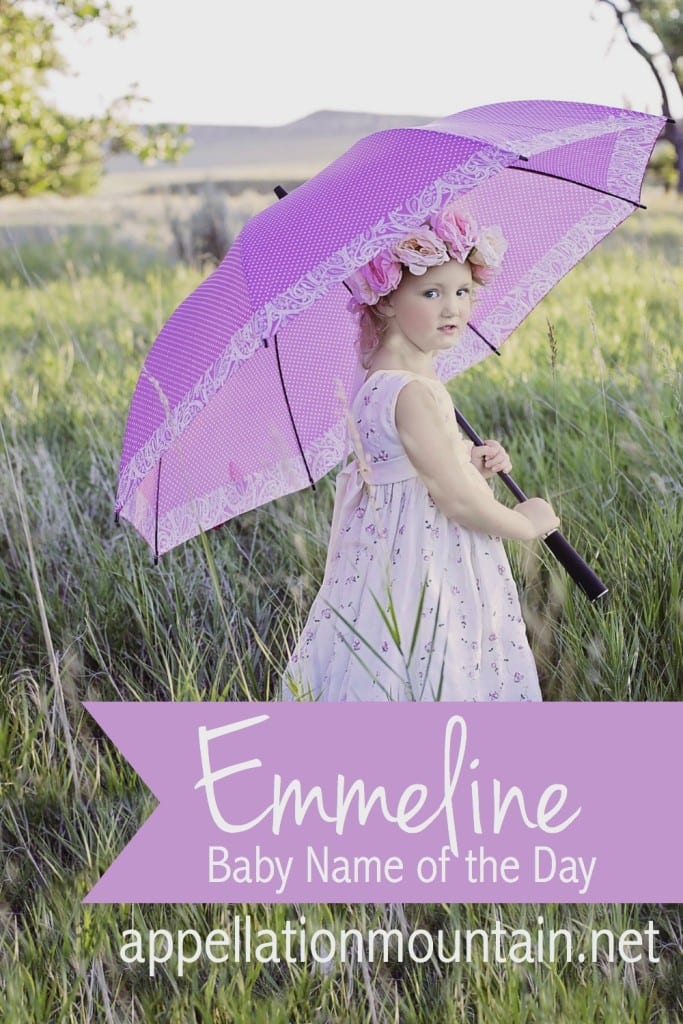 In 1788, Charlotte Turner Smith chose this name for the heroine of her novel, Emmeline, The Orphan of the Castle. It’s very much a Cinderella story.

It appears the name was in sparing use in England for many years.

The name was worn by at least one prominent American suffragette, as well as two noted suffragettes in the UK, including Emmeline Pankhurst.

There was also a writer in the same era, who penned true tales of English governesses abroad.

A twentieth century novel about a nineteenth century girl inspired a modern opera, also called Emmeline. It wasn’t such an outlandish choice, though – Mark Twain used the name for a poet and painter in his 1885 novel, Huckleberry Finn.

The name became familiar to recent generations in 1980. That’s when blockbuster The Blue Lagoon gave the name to a young, shipwrecked Brooke Shields. The movie was set in the Victorian era.

There’s a tiny uptick in the name’s use immediately following the movie’s release – from a dozen or fewer girls most years pre-1980, to closer to two dozen most years following.

But The Blue Lagoon wasn’t enough to launch Emmeline. Despite the name’s vintage style, it had never before charted in the US Top 1000, though Emmaline and Emaline were both occasionally used.

Anne of Green Gables fans might recognize Emmeline Harris, a character added for the 1987 Anne of Avonlea television movie. It’s another case of the name being chosen to convey a nineteenth century vibe.

JK Rowling used the name for a minor character in the Harry Potter series, a member of the heroic Order of the Phoenix.

There’s also an island near Antarctica, a Tongan diplomat, a Japanese manga character, a song by Ben Folds, an actress from television’s I Dream of Jeannie and the nanny who drops to her death in Disney World’s Hollywood Tower of Terror attraction.

Emmeline: Back on the Charts

Today, Emmeline sits at the crossroads of two trends:

Emmaline re-entered the US Top 1000 in 2012, and Emmeline followed in 2014. Both seem poised to rise even higher, a perfect compromise between the very popular Emma and the modern Emerson.

What do you think of Emmeline? Do you prefer it spelled Emmaline?

This post was originally published on August 3, 2009. It was substantially revised and re-posted on March 22, 2016.