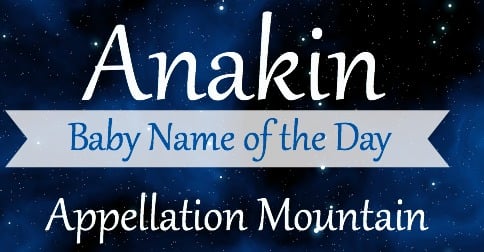 Anakin cracked the US Top 1000 in 2014, and had everyone asking: would you really name your son after Darth Vader?

Debut Names Month continues with Anakin as our Baby Name of the Day.

Even if you’re not a science fiction fan, you probably know the Star Wars story. Young Luke Skywalker learns that he’s a Jedi knight and becomes part of the Resistance, challenging a ruthless Empire. Along the way, he discovers that Darth Vader – the Big Bad himself – is actually his father.

We later learned that Vader was born Anakin Skywalker, and wasn’t such a bad guy at first. I mean – he was an adorable kid, right?

So where did Lucas find the name of one of cinema’s greatest villains?

In a 1997 interview, the filmmaker explained that he chose names that “telegraph a bit of the character” and that “sound unusual but not spacey. I wanted to stay away from … science fiction names like Zenon and Zorba.”

He’s never mentioned exactly where he found Anakin, though, and that’s left us all guessing.

In early drafts of the story, Luke’s name was Annikin Starkiller. The first name eventually leapt from son to father, and was respelled in the process.

One theory for Anakin’s origins? In the Old Testament, the anakim were powerful giants. It’s possible that their name comes from a Hebrew word meaning strength.

They were eventually banished by Joshua. Mostly. David’s Goliath was probably descended from the Anakim. Since Luke was very much David to Darth’s Goliath, it’s an appealing possibility. 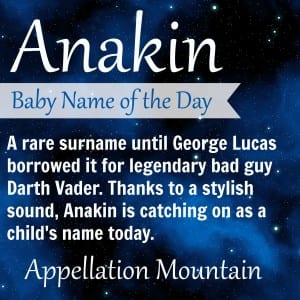 An equally persistent rumor is that Lucas borrowed his villain’s name from a colleague, fellow director Ken Annakin.

The British filmmaker got his start making propaganda films during World War II, and went on to direct many hit films, including Disney’s Swiss Family Robinson.

I hit a brick wall researching the surname. It’s not unknown, and multiple spellings are in use.

One guess is this: -kin or -ken means little in Dutch and English and could function like -son. Robertson means Robert’s son. But so does Hopkins. Hob and Hop were old nicknames for Robert; add -kins to Hop, and it’s almost the same idea.

Could Annakin mean son of Ann? Surnames from mothers’ names are rare, but not unknown.

All of that is a guess, and Lucas has never come out and confirmed that his fellow director’s surname was the inspiration. In fact, he’s denied it. But the similarity is hard to overlook.

If you’re having a baby in 2016, you’ve always lived in a world with Star Wars. It’s part of the reason Luke is such a popular name today.

Anakin slipped as the Jedi knight turned to the dark side in subsequent movies, but by 2012 it was on the rise again. In 2014, there were 218 boys named Anakin – enough to push the name into the Top 1000 for the first time ever.

It wasn’t just about Star Wars. In fact, the name may succeed despite its space opera roots. With names like Sebastian, Julian, and Cameron in the Top 100, the three-syllable Anakin fits right in. And we love A names for boys, from ancient Alexander to fiery Aiden to another three-syllabe choice, Adrian.

It suggests that Anakin could shed its sci fi origins, and become a mainstream choice for boys.