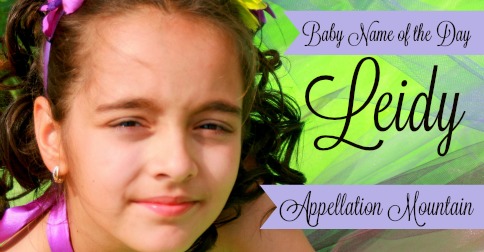 Leidy is proof that inventive baby naming is by no means an American phenomenon – nor is it especially new.

Our Baby Name of the Day goes out to my sister-in-law’s sister.

Leidy: By the Numbers

I’ve been tempted to write about this name ever since I first heard it. Except, the Leidy in my extended family lives on the other side of the world, and we’ve never met. Her mother made some great, bold choices for her children’s names, but I really don’t know where she found inspiration for this particular name.

What I do know is that every language seems to have names like this: names that aren’t easy to understand for outsiders, names that are rare enough that’s it tough to track down information even if you speak the language in question. Leidy is the opposite of Daleyza. Or, in American terms, Daleyza is more like Khaleesi – a pop culture phenomenon widely discussed, while Leidy is more like Evolet.

And yet, Leidy isn’t unknown in the US. It was first given to more than five girls way back in 1974. In 2006, there were 50 newborn girls given the name. And last year, there were 22 newborn Leidys.

In addition, eight girls were named Leydi. While Leidi is even less familiar, it’s also been given to newborn girls in the US. 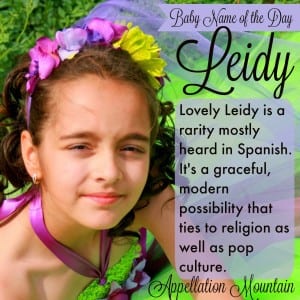 The name sounds exactly like the English word lady. And I believe that’s all it is: an English-language word imported into Spanish with a phonetic spelling applied.

My hunch was confirmed in this video, where she explains that it simply means señorita.

The question then is why? And here I’ve hit a brick wall. My theories:

Another thing that I found interesting: I couldn’t find any spelling of the name on Baby Center’s Spanish-language, site, but the user namers that popped up during my search suggested that plenty of women do use the name. It also seems to be pretty common in double names, just like Maria and Ana.

The 1940 US Census turned up a handful of men with this as a first name, which sent me searching for an explanation. It turns out that Germanic surname Leidig was often Anglicized this way.

It originally comes from a German word – lied – which translates to sorrow, woe, or perhaps harm. The meaning is negative – but surname is completely different from the modern given name.

I found plenty of women by the name in real life: a Cuban ballerina, a Colombian weightlifter. A handful of similar – and equally rare – names popped up in my searches, too, including Leire and Leya.

While it’s not listed on every Spanish language baby name site, I did find it here, where it was described as “very unusual.”

Have you ever met a Leidy? What do you think of this name?