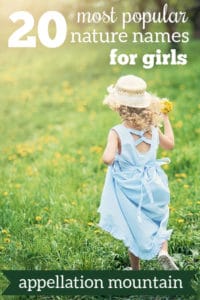 The US Top 1000 – and even the Top 100! – is packed with nature names for girls. From long-time, traditional favorites to modern innovations, there’s something for every family.

The very first time I compiled this data was way back in April 2015. This was the Top Ten back then:

The challenge, of course, comes from defining a nature name. In the past, I’ve counted Luna, but not Stella. Brooke, but not Isla. Ruby and Pearl, but not Gemma. I’ve relaxed the rules slightly this time around. But the line between straight-up nature name that you’d find in the dictionary and one that’s merely inspired by the natural world? It’s fuzzy at best.

So these are the 20 best nature names for girls – but they’re far from the only ones! 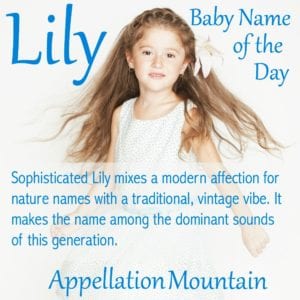 This flower power name still holds the top spot. Many more girls answer to longer Lily names, too – in fact, Lillian ranks even higher than just Lily! Lillie once reigned as the most popular spelling, but today the flower and the girl nearly always share the same spelling. My favorite Lily fact? It’s possible this name evolved as a nickname for Elizabeth, and Lillian and company came later.

Luna keeps on climbing, rising from #12 in 2015 to #6 on the last list, to #2 today. The Latin and Spanish word for moon instantly brings to mind the night sky, but also a quirky Harry Potter heroine and plenty of celebrity kids. The sound – heavy on the L and the oo – helps, too, as it fits right in with fellow Top 100 names Lily, Ruby, and Lucy, as well as so many two-syllable, ends-in-a choices for girls.

The Latin word for star owes much to its -ella ending, just like chart-toppers Ella-Bella-Isabella. But there’s no question that we love night sky names, too. After all, the boys’ list includes Orion. As for the girls? Look just one spot up to the fast-rising Luna. There’s something wildly romantic about naming your child for a star, but Stella also feels vintage and sparky. There’s lots of reasons to love this name. 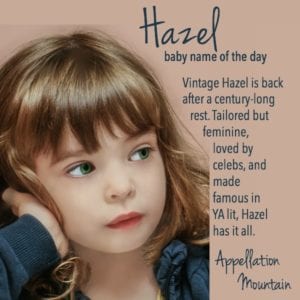 Hazel has spiked in use, climbing from the #10 spot in 2015 to #3 today. Gentle, vintage, and frills-free, a number of celebrity parents have embraced the name, from Julia Roberts to Emily Blunt. Factor in John Green’s appealing Hazel Grace from A Fault in Our Stars and no surprise this name is catching on. Another bonus for Hazel? Like many popular choices, it’s a color name as well as one borrowed from the natural world. 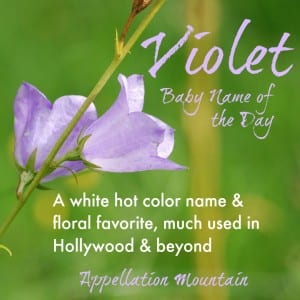 Elegant and vintage, Violet is back in a big way today. Once considered shrinking and shy, we now tend to think of this name as vibrant and bold. Some credit goes to Downton Abbey’s inimitable Dowager Countess of Grantham, played by Dame Maggie Smith. There’s also Violet of The Incredibles – the teenage sister. The Disney-Pixar superhero family returned for a new adventure in 2018, which could boost the name even further.

Autumn first attracted attention at the end of the 1960s. It’s now the most popular of the season names for girls. Tailored and modern, it rose as names like Allison and Erin fell. There’s even an Autumn in the British royal family. Queen Elizabeth’s eldest grandson, Peter Phillips, married Canadian-born Autumn Kelly in 2008.

Count Ruby among the most colorful of names, a sister to Scarlett and Blue. But this gemstone name also brings to mind the natural world. Rubies can come in shades as light as pink, but we tend to think of the more vivid, richer reds. It’s also a favorite girl’s name used in song lyrics, from Dion to Kenny Rogers to Rancid to the Kaiser Chefs. Choose your lullaby!

Willow has climbed on the US charts as well as the nature names for girls rankings. Not so long ago, Willow was a wild celebrity baby name, courtesy of power couple Will and Jada Smith. (She’s named for dad; son Jaden was named for mom.) A bewitching Buffy the Vampire Slayer character boosted the name, too, and don’t forget our affection for o-ending names for girls. No surprise this gentle but modern sounding choice continues to climb.

Take Ava, mix in a healthy dose of nature names for girls, and you’ll arrive at Ivy. It feels slightly edgy, thanks to comic book villain Poison Ivy and a 1992 Drew Barrymore movie. But it also feels privileged and accomplished – think of the Ivy League. Word is that Beyonce and Jay-Z used it as Blue’s middle name to refer to their lucky number, four – IV. A long history of use puts this name in the ecovintage camp, and yet Ivy currently ranks at its popular – ever.

Rock and roll royal Mick Jagger and his model wife Bianca gave this gemstone name to their daughter way back in 1971. While it wasn’t completely unknown in the US – and has enjoyed use for boys and girls alike over the years – it took the celebrity birth announcement to send Jade into the US Top 1000. Since then, it’s helped spark the rise of spin-off names like Jada and Jayden, but it’s also found a place as a modern, but not invented, gemstone name for a daughter. 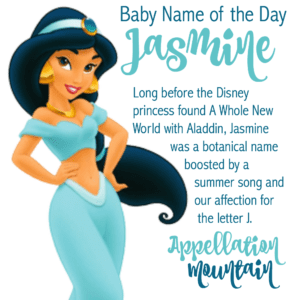 Jasmine stands among the most successful Disney princess-inspired baby names of all time. But this name boasts history galore. Older forms Jessamy and Jessamine saw some use in England well before the twentieth century. Seals and Croft’s 1972 hit “Summer Breeze” might have boosted the flower name in the US – the lyrics repeat “blowing through the jasmine in my mind.” Then came actress Jasmine Guy, and finally, the princess of Aladdin fame. It’s remained in heavy use since the 1980s, a modern staple.

Vintage and lovely, Rose once had little to do with nature names. Instead, the Normans brought it to England, borrowing from Germanic name elements like hros – horse – and hrod – fame. But it quickly became tied to the flower, and now it’s impossible to see Rose as anything but a botanical. Graceful and elegant, spare Rose is cousin to dozens of more elaborate Rose names. Most of these don’t qualify for the list, but there’s no question that Rose belongs in the garden of girls.

I’ve yet to write about just Rose! Check back later and I’ll update this post when I do.

Iris counts as a goddess name, a flower name, a color name, and a name borrowed from the sky. How can so much meaning attach to just four letters? A favorite 90s rock ballad uses the name, and even though it’s never left the US Top 1000, it’s more popular than ever today. Credit clearly goes to The Goo Goo Dolls’ 1998 smash hit, but also to the name’s many qualities. In Greek myth, Iris served as goddess of rainbows, delivering messages for Hera and the other gods by traveling to Earth over the colorful arcs.

Daisy feels light and fresh, a name for a summer day. Bicycle Built for Two serves as a built-in lullaby. Henry James’ Daisy Miller makes it literary – and tragic. Downton Abbey’s hard-working character by the name lends it some backbone. Sometimes associated with Margaret, Daisy most often stands on its own. It’s a bright botanical, a nature name more casual than Rose, but with nearly as much history. 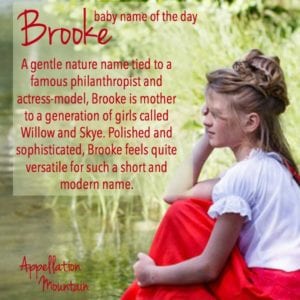 Socialite and philanthropist Brooke Astor put this name on the map when she married into the wealthy Astor family in 1953. Actress Brooke Hayward boosted it in the 1960s, but it took model-actress Brooke Shields to make it a sensation. Originally a surname for someone who lived near a brook, the extra ‘e’ has stuck. It spent nearly three decades in the US Top 100. It’s the forerunner to so many other choices on this list.

Rowan makes the boys’ list, too. In general, tree names tend to trend masculine. But Rowan has gained steadily for boys and girls alike since the 1990s. Some credit goes to Anne Rice’s Rowan Mayfair, the witch at the center of her other popular paranormal series, The Witching Hour. But Brooke Shields gave the name to her firstborn daughter in 2003, pushing this upbeat Irish name into the girls’ Top 1000.

Call Summer one of the first hippie nature names to break into the mainstream. It debuted in the US Top 1000 in 1971; though it was bestowed in small numbers throughout the twentieth centuries. Rachel Bilson and Zooey Deschanel have worn the name, and Christina Aguilera gave it to her daughter. While Summer lags Autumn on the charts these days, once it was the opposite. Credit for Summer’s 1970s surge likely goes to Miss USA 1975, Summer Bartholomew – born Robin Summer Bartholomew in November 1951.

I’ve yet to write about Summer! Check back for updates.

Is June a nature name? Since I counted August for boys, I feel like June belongs for girls. It reads vintage and gentle, and a little more word-like than Mae, the merry month name. (Mae ranks #582, and May fails to chart, so they’re still far less popular as given names.) More traditional than summer, June still brings to mind every bit of seaside and sunshine, picnics and green grass. It’s an easy name to love, but if June strikes you as incomplete, longer forms abound. 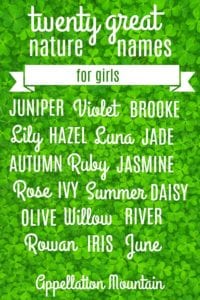 Olive is straight-up edible, while still feeling perfectly traditional. From Popeye’s girlfriend to Olive the Other Reindeer, the name is familiar to children. But until recently you wouldn’t meet a baby Olive. It departed the US Top 1000 in the 1950s, not returning until 2007. A bonus? The olive branch is a symbol of peace, lending this tailored name a rich meaning.

Another name appearing on both the girls’ and the boys’ nature names lists, River arrived recently for girls. Inspired by the tragic death of actor River Phoenix, this quiet nature name has been in the boys’ Top 1000 since 1994. It only appeared on the girls’ list starting in 2009. With so many kids answering to Carter and Hunter – as well as Harper and Piper – it seems inevitable that River will trend unisex. River names, on the other hand, tend to be slightly more gendered, like Afton.

Juniper – This name seems destined for the Nature Names Top 20. It rose from #352 to #314, sure to replace some falling favorites like Brooke and Autumn in another year or so.

Aspen – At #329, this wintry place name and tree name is another up-and-comer.

Dahlia – Gorgeous, vintage Dahlia ranks #393 in the US.

Raven – Bird names are having a moment. Raven has been around since the 1970s, but still comes in at #446. The revival of That’s So Raven as Raven’s Home on Disney Channel helps remind parents of the name.

Holly – Former favorite Holly is another forerunner of today’s nature names for girls, still holding on at #494.

What are your favorite nature names for girls?

Originally published on October 6, 2017, this post was revised substantially and re-posted on April 22, 2019. 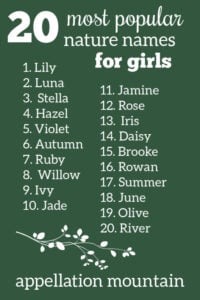