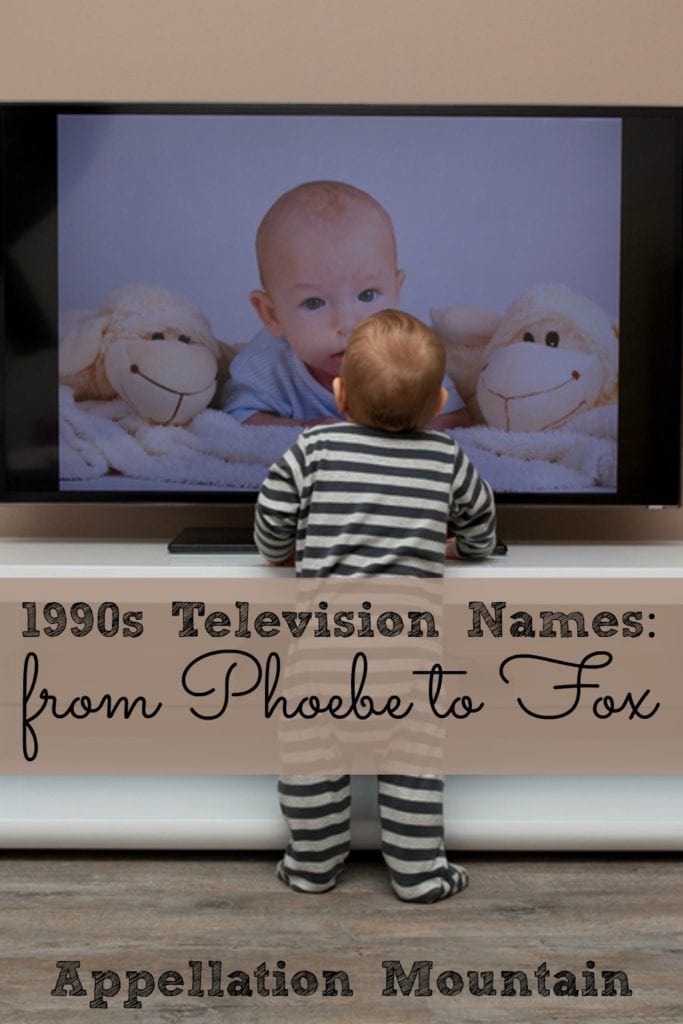 1990s television names ranged from the obvious (Stephanie, Ally, and Joey) to the rare (Salem, Brighton, and Prue). But in between the extremes were twenty great 1990s television names that have proved influential in the twenty years or so since we first met the characters that wore them.

Here are my picks for the ten best 1990s television names for girls and ten best for boys. Thanks to bb for suggesting the idea as part of Lurker Week!

Phoebe – Phoebe takes the top spot for girls’ 1990s Television Names. How could it not? The name of the quirky, hippie-musician member of the Friends ensemble cast, as well as one of the three bewitching sisters on Charmed, Phoebe was rare at the beginning of the decade. It leapt over 200 places after 1994, when Friends debuted, and jumped again after Charmed came on the air in late 1998. It’s another moon goddess possibility, a night owl name for girls that fits right in with Stella and Luna.

Emma – Okay, Emma probably shouldn’t count. Friends didn’t make Emma popular. The literary name was already on the upswing, bolstered by the rise of Emily and Gwyneth Paltrow’s turn as Jane Austen’s enduring heroine in a 1996 movie. In fact, 1980s series Kate & Allie included a daughter called Emma – which might properly get credit for the name’s rise. In 1990, Emma stood at #130. By 1997, it was #36. Ross and Rachel’s daughter wasn’t born until 2002, when Emma already ranked #4. So it’s not, strictly speaking, on this list of 1990s television names, and Friends can’t take credit for the name’s popularity. But I’d bet that every one who was watching television in the 1990s knows that powerhouse series wrapped up shortly after the birth of Emma Geller-Green. And Emma did reach #1 not long after. So Emma stays!

Charlotte – We first met lady-like, romantic Charlotte York in 1998, in the very first episode of Sex and the City. There’s no question that the character prompted parents to reconsider the classic name. In 1998, the name ranked #305 and was falling. By 2003, it was back in the US Top 200. Fast-forward another decade or so, factor in a princess, and bam – #9 name! 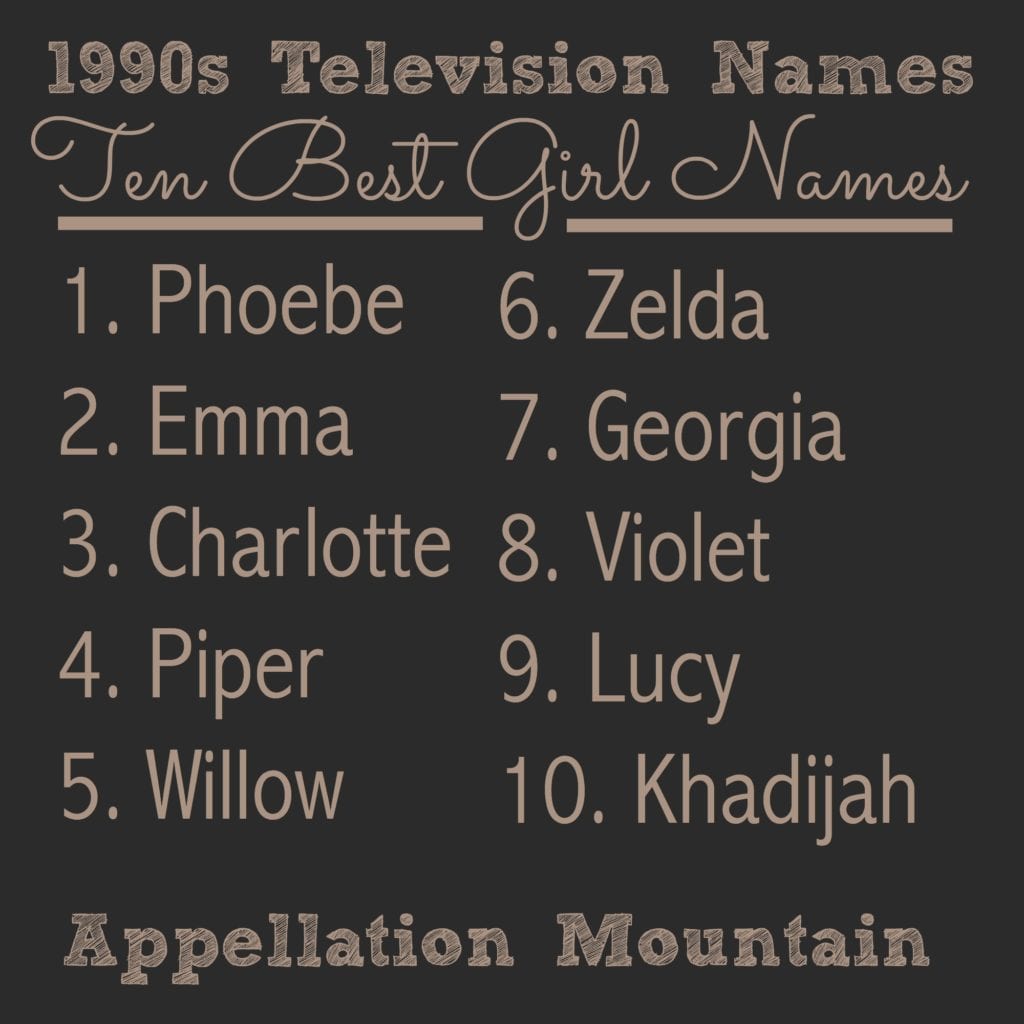 Piper – We usually credit Orange is the New Black’s Piper Chapman (based on the real life Piper Kerman) with the name’s revival. But it’s not quite so. Piper – already vaguely familiar thanks to actress Piper Laurie – entered the US Top 1000 in 1999. That’s the year after Charmed debuted, making it one of the more influential shows – two of the top 1990s television names for girls came from the series! OITNB has boosted the name – but it was already in the Top 100 when the Netflix sensation debuted.

Willow – Joss Whedon is a genius namer, and Willow is among his greatest triumphs. When the sci-fi-meets-high-school series started, Willow was a super-smart, but shy, ally to Buffy the Vampire Slayer herself. The year was 1997. By 1998, Willow was a Top 1000 baby name. The character evolved into a powerful witch – and even more important ally and BFF to the world-saving Buffy. In 2000, Will Smith and Jada Pinkett Smith named their daughter Willow. The name is now ranked #111 in the US.

Zelda – Like Emma, I’m not certain that Zelda entirely fits with 1990s television names. Sabrina, the Teenage Witch debuted in 1996, with Sabrina’s aunt Zelda played by Beth Broderick. Zelda remained in style limbo throughout the 1980s, and only returned to the US Top 1000 in 2015. So maybe Sabrina’s aunt gets no credit for the name’s return. However, it’s undeniable that some of today’s parents grew up watching the antics of the extended Spellman family, and while many of their names (Dorma, Hilda, Beulah, Mortimer) seem likely to remain unused, Zelda is back.

Georgia – Ally McBeal’s main character was the very reasonable Allison – a pitch-perfect name for a late twenty-something attorney in 1997. Courtney Thorne-Smith played fellow attorney Georgia – a much less likely pick for a woman born circa 1970. But after Ally debuted, Georgia was boosted – going from 1996’s #582 to 2000’s #334. Today Georgia ranks #230.

Violet – There are so many fictional Violets, from Willy Wonka and the Chocolate Factory to Downton Abbey. But one memorable Violet falls smack in the middle of the 1990s – Violet Bickerstaff, the shy and bookish girlfriend for Screech on Saved by the Bell. We first met the character in 1990, when the name was completely out of the US Top 1000. Does Miss Bickerstaff get credit for the name’s revival? Maybe. But just a smidge. Because Tori Spelling played the character – but in heavy glasses, and with a different voice – Violet was a bigger deal than many a minor character. And doubtless many of the Saved by the Bell viewers weren’t old enough to have kids until many years later. (Unlike, say Ally McBeal’s audience.) Still, by the end of the 1990s, Violet was rising rapidly in use, so it stays on the 1990s televisions names list. 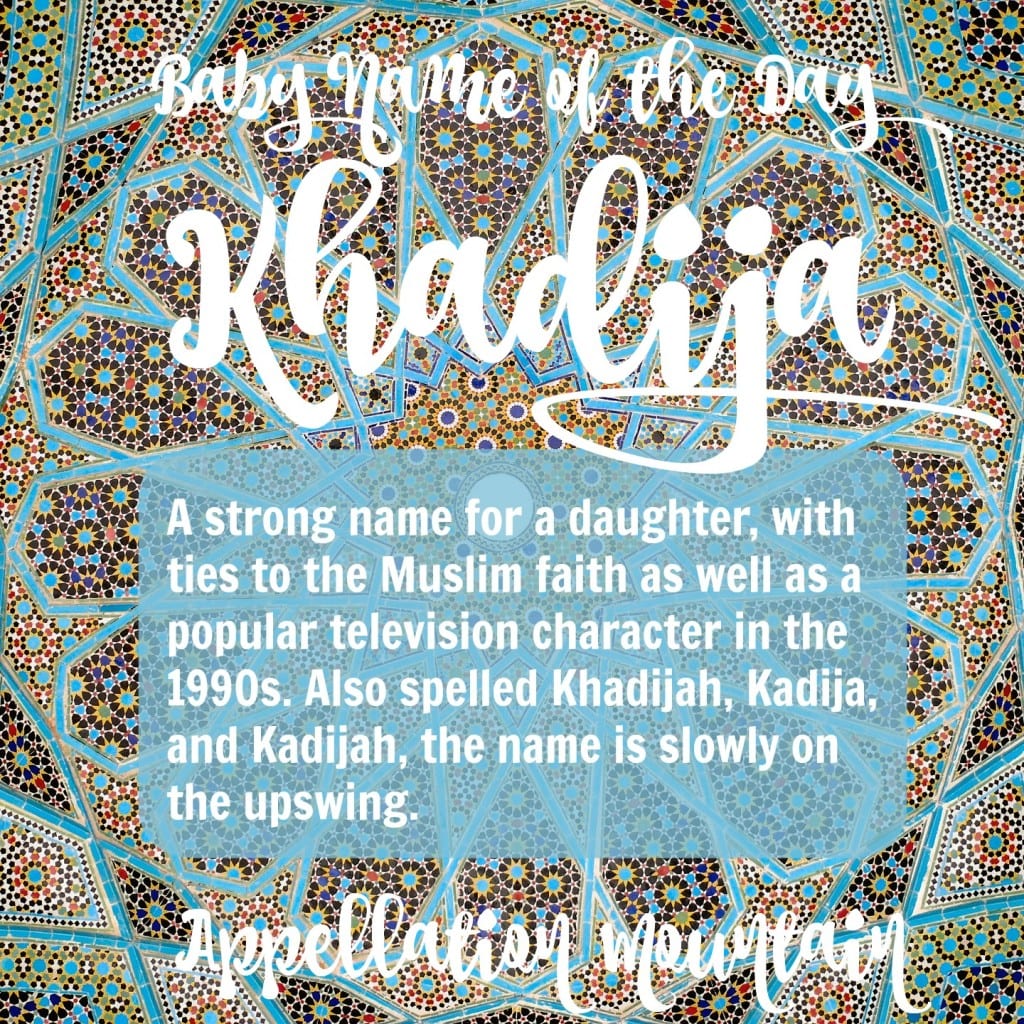 Lucy – 7th Heaven debuted in 1996, and ran through 2007. It was the story of the Camden family. Lucy was the third of seven Camden kids, and the second oldest daughter. She went from wild child to married woman, and followed in her father’s footsteps as a minister. At the time the show started, Lucy was hovering in the 400s. By 2007, the name ranked #135. The name has continued to climb ever since, reaching #55 in 2015.

Khadijah – Remember Queen Latifah as the confident, independent Khadijah Jones on Living Single? I hadn’t realized until I wrote the post on the name Khadijah just how much her character influenced parents. The show debuted in 1993, and the name, with this exact spelling, debuted on the charts the very same year. A year later, it was in the Top 200! Kadijah also debuted in 1993. I’d always assumed parents chose the name for spiritual reasons – and perhaps that’s a part – but Queen Latifah put it on the map.

Fox – I keep waiting for Fox to crack the US Top 1000. 193 boys were given the name in 2015, more than ever before – and yet it remains relatively underused. But it’s absolutely on our radar thanks to a 1990s television staple, Agent Fox Mulder of The X-Files. The show debuted in 1993, and the original series lasted through 2002 – though additional installments have appeared since. We’re so in love with the letter x in boys’ names that it feels like Fox is sure to catch on … eventually!

Aidan – Aidan is the Emma of the boys’ list! Sex and the City is absolutely a 1990s television show – it debuted in 1998. But the character Aidan Shaw, played by John Corbett, joined the cast in Season 3 – in the year 2000. The name probably owes its rise to actor Aidan Quinn, or maybe just our search for new Irish appellations to replace Ryan. But 2000 was a good year for Aidan. By 2001, it had entered the US Top 100, and the splintering of other rhyming names started shortly thereafter.

Carter – Carter wasn’t a television character’s given name in the 1990s. But it is among the 1990s television names, because E.R. gave us Dr. John Carter – almost always called by his surname. Carter made the leap from the last to the first name spot, and started to climb up the charts. In 1990, it hadn’t cracked the Top 500. Now it’s a Top 100 staple.

Luka – While we’re tuned into E.R., Goran Visnjic playing Dr. Luka Kovac joined the series in 1999, following the departure of George Clooney as Dr. Doug Ross. At first glance, there’s no correlation between the fictional doc and baby names. Except Luca debuted in the US Top 1000 in 2000 – a year after we met Dr. Kovac. The ‘k’ spelling followed a few years later, in 2004. It wasn’t the first pop culture use of the name – Suzanne Vega had a hit with a single, “Luka,” in 1987. And, of course, The Godfather movies gave us Luca Brasi. But it’s the small screen that boosted it into regular use, so Luca/Luka is among the 1990s television names.

Xander – Willow made the girls’ list, and this Buffy the Vampire Slayer name makes the boys’ 1990s television names list. In the science fiction series, Xander was short for Alexander – certainly not a novel name. But most kids answered to Alex, at least until the show’s 1997 debut. While it’s impossible to say how many Alexanders dropped the Ale instead of the ander going forward, we do know that by 1999, Xander had debuted in the US Top 1000 as an independent name for boys.

Dawson – Conventional wisdom is that Dawson was unheard of as a boy’s name until Dawson’s Creek debuted. That’s only half right. Dawson was on the rise earlier, debuting in the US Top 1000 in 1994 – several years before Dawson’s Creek debuted in January 1998. But James Van Der Beek’s optimistic, old-fashioned Dawson Leery did encourage parents to embrace the name. By 1999, it had catapulted more than 500 places into the Top 200. It’s also part of the entire class of -son names: Mason, Jackson, Harrison, Carson, and Grayson all gained in the same era. 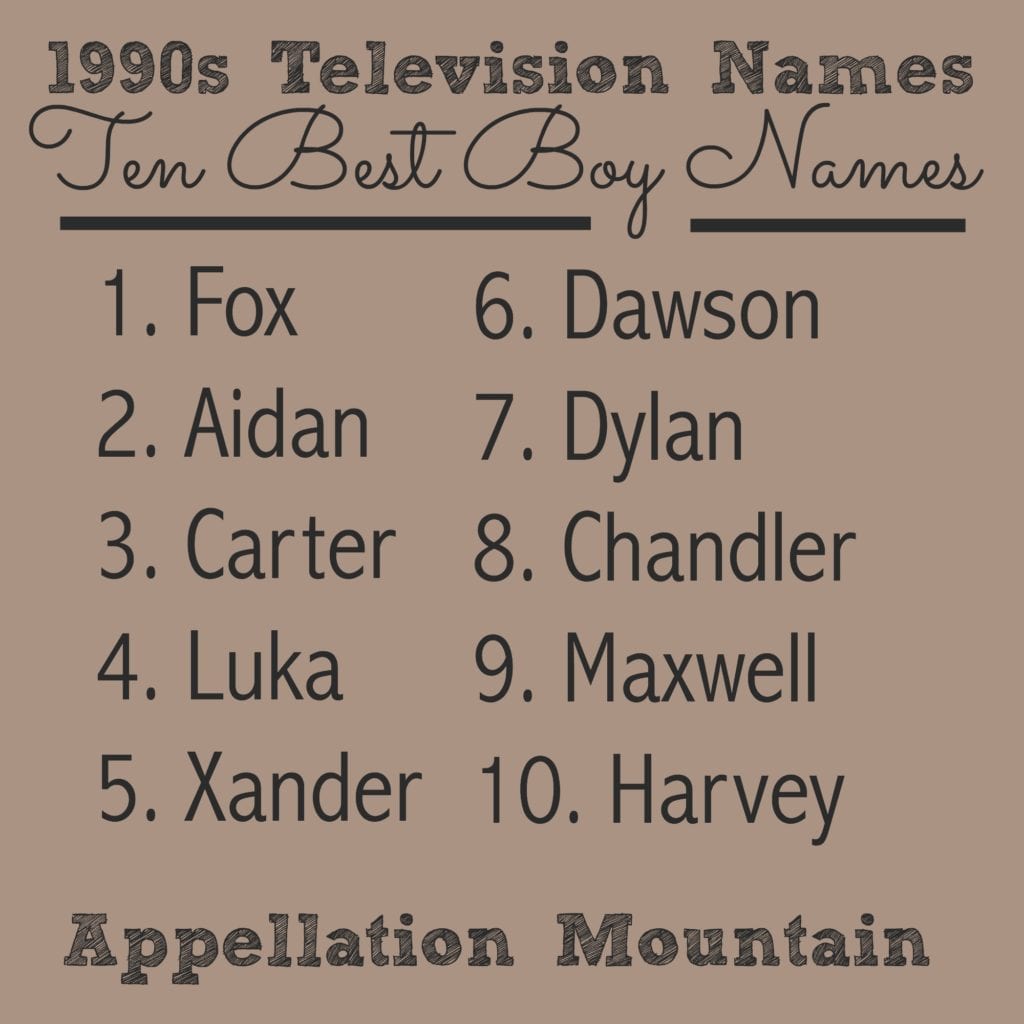 Dylan – Dylan McKay started out as Beverly Hills, 90210’s resident bad boy. He reformed over the show’s run, leaving during the sixth season. The show launched in 1990 and concluded in 2000, making it a nearly perfect breeding ground for 1990s television names. But Dylan is the only one to make the list. Other choices – like Brenda  and Donna – were a little dated when the series premiered. Dylan was already on the verge of the US Top 100 in 1990, but the popular character helped tip the name into the double-digits.

Chandler – Long a surname name originally given to candlemakers, Chandler Bing was a thoroughly offbeat pick for Friends – more out-there than even Phoebe Buffay. Like Phoebe, the name had seen use prior to the show’s 1994 debut. But it went from the 350s to the Top 200 in the early years of the show’s run. While Chandler never became a chart-topper like some of the other names on this list, it definitely got a boost from the small screen. A second Chandler appeared on 7th Heaven in 1996.

Maxwell – This might be a stretch, but does The Nanny deserve a nod for introducing parents to Maxwell? The comedy debuted in 1993, featuring brash Fran Fine as the unlikely caregiver for the upper class Sheffield family. He’s a widower, English by birth, but now employed as a Broadway producer. The numbers track – Maxwell had plateaued around the 180 mark when the show first aired. It climbed slowly in the next few years, and has remained in the Top 200 ever since.

Harvey – I think the credit for Harvey’s comeback likely lies with a current small screen favorite: Suits. But Sabrina, the Teenage Witch gave us a Harvey, back in 1996. He’s an ordinary Joe in love with the bewitching Sabrina. Only she keeps him in the dark about her real identity, and after four seasons of subterfuge, they break up. Could it be that some of Sabrina’s fans from back in the day grew up with a soft spot for Harvey? It’s a stretch, but I’m keeping this one on the list of 1990s television names.

There – now you have my favorites! Which influential 1990s television names did I miss? Did any of these influence your own favorites?