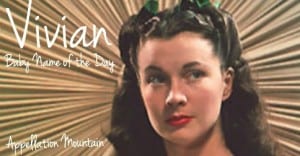 Forms of this name belong to a Hollywood legend, a Jolie-Pitt twin, and an ancient martyr.

Thanks to Pea for suggesting Vivian as our Baby Name of the Day.

Vivian: Borrowed from the Boys?

Purists might insist that Vivian isn’t a girls’ name at all. It’s just an early case of name-napping from the boys.

It isn’t that simple.

Vivianus was a late Roman name, from the Latin vivere – to live. It’s also the root of vivacious and vital and vivid, all appealing words.

Viviana would have been the original feminine form, with Viviane, Vivianne, and eventually Vivienne emerging, as well as the Italian Bibiana.

There was a male Saint Vivian way back in the 400s or maybe the 500s, a bishop in France, and a martyred Saint Vibiana in the 200s.

But there are two reasons to consider this spelling feminine:

There are some notable Englishmen by the name, including Benjamin Disraeli’s fictional Vivian Grey, but in the US, Vivian has been more common for girls since at least the late nineteenth century. 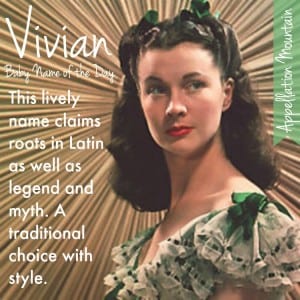 One possible reason: Mabel McKinley, niece of President McKinley, became a popular songwriter, and scored a string of hits beginning around 1903. Or perhaps Miss McKinley just had an ear for fashionable names.

There are plenty of uses throughout the twentieth century, from singer-actress Vivian Dandridge (sister to Dorothy) to Julia Roberts’ character in Pretty Woman to Will Smith’s Aunt Viv on The Fresh Prince of Bel-Air.

While Vivian never really went away, the name dipped into the 400s and 500s in the 1970s and 80s. If the hundred year rule applies, no wonder the name is rising again, along with other 1930s favorites.

Add in variant spellings, and there’s a whole family of Viv names:

Gisele Bundchen and Tom Brady stuck with the Vivian spelling for their daughter in 2012.

Vivian: On the Rise

There are so many reasons Vivian has caught on in recent years. Credit the name’s mix of vintage appeal and modern style, the great meaning, and the meaning notable bearers.

The question is, of course, what’s next? My guess is that Vivienne will eclipse this spelling, but perhaps I’m wrong. Vivian could join Evelyn in the US Top 20 – and this name has been to the Top Ten before.

Which do you prefer, Vivian or Vivienne? And how popular do you think Vivian will be in a few more years? Will it return to the Top Ten?