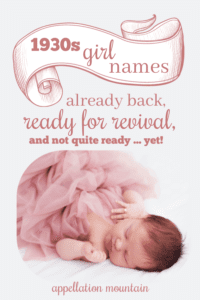 Are 1930s names prime for revival?

Spend much time on baby name sites, and you’ll hear about the 100-year rule. Generally speaking, it takes about a century for a name to sound fresh and new again.

It’s why we so often like our grandparents’ and great-grandparents’ names, but find our parents’ names a little dated, and our own names downright ordinary. Andrew and Stephanie name their babies Lucy and Clara – choices that might have been appropriate for their grandmas or great-grandmothers, too.

So maybe the best place to find the next wave of stylish girl names is sometime in the year 1929?

Of course, it’s also true that:

This list looks at some of the Top 100 names from 1935 – smack in the middle of the decade. We’re focusing on the names that have made their comeback – or those that have nearly really went away.

Look for the next installment of the series coming soon – 1930s girl names that might just be ready for revival. 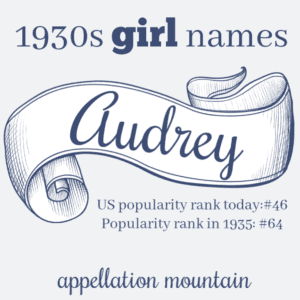 There’s style icon Audrey Hepburn, a figure that puts this name in the company of Hollywood glam names like Ava and Mae. It feels gently old-fashioned and nicely nickname-proof. Borrowed-from-the-boys Aubrey ranks slightly ahead of Audrey on the popularity charts, but it’s Audrey that offers up vintage appeal. Read more about Audrey here. 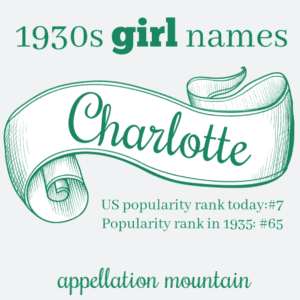 Credit Sex and the City’s Charlotte York for putting this name back on parents’ radar. When the HBO original series debuted in 1998, Charlotte languished in the 300s. Fast-forward to today, factor in a British princess, and Charlotte has become a Top Ten favorite. Read more about Charlotte here. 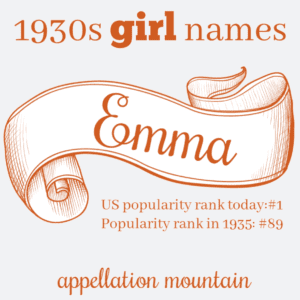 Strictly speaking, Emma belongs with nineteenth century girl names. But it was still going strong in the 1930s – a reminder that many popular names take decades to rise and fall. With ties to history and literature, Emma’s appeal enduring across the years then, and will almost certainly do the same once again in this generation. Read more about Emma here. 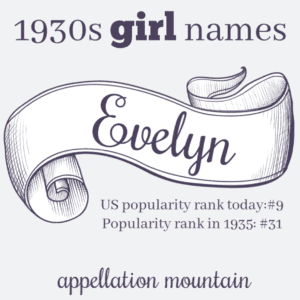 Parents are wild for Ev- names, which everything from lacy Evangeline to modern Everly attracting more attention in recent years. But Evelyn has risen highest, a tailored name at home in the twenty-first century, but with plentiful history to root the name in the past. Read more about Evelyn here. 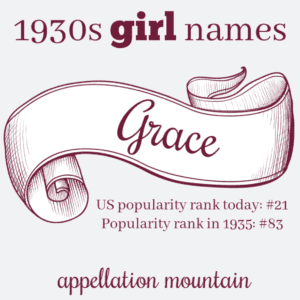 A virtue name with spiritual overtones, Grace makes a meaningful choice. Grace Kelly lends it some Hollywood glam and makes it royal; Gracie sounds as down-to-earth as any name can be. Like Emma, this name’s heyday was in the 1800s, but it endured into the 1930s, proving this name has staying power. Read more about Grace here. 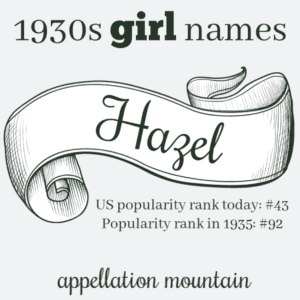 Ecovintage Hazel has been boosted by celebrity parents and young adult literary heroines. It’s a nature name more traditional than Willow, but less expected than Rose. Once dismissed as too old-fashioned, it feels nicely current for a daughter today. Read more about Hazel here. 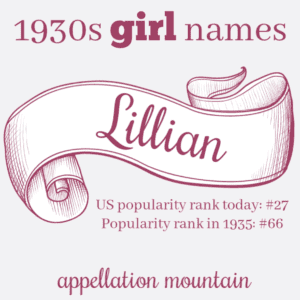 The Lil- names come and go. In the 1930s, parents preferred Lillie. Today, it’s the more botanical Lily. But one constant is Lillian, a name used in English for centuries. It’s a nice compromise between the frillier flower names and the more buttoned-down classics. Fun fact: Lillian is an elaboration of Lily, which started out as a pet name for Elizabeth. 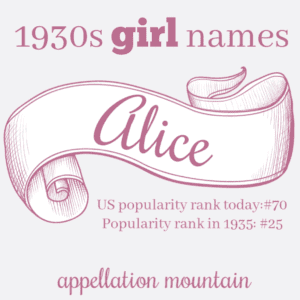 Storybook Alice continues to climb. Besides her Wonderland ties, there’s Tina Fey’s daughter, the Twilight character, and the hero of Resident Evil. Rumor had it that Kate picked this name for a Cambridge princess. Once, Alice was a waitress and a wise-cracking housekeeper. Now Alice is fresh, on-trend, and traditional, too.  Read more about Alice here. 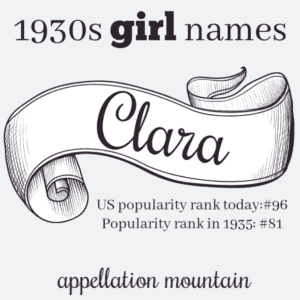 Sweet and saintly, the star of The Nutcracker, and a nicely pan-European name, Clara’s appeal is clear. It’s nickname-proof, another plus, and both timeless and on-trend. Unlike some of these 1930s names (cough, Charlotte, cough), it’s also not skyrocketing to the very top of the charts, which adds to the name’s appeal. Read more about Clara here. 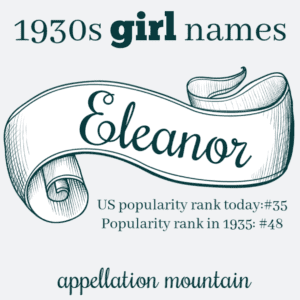 Strong and maybe a little bit serious, Eleanor feels formal. And yet, it comes with nicknames that can feel downright fanciful. And Eleanor of Aquitaine, the driving force behind the medieval concept of courtly love, lends the name a romantic edge. Read more about Eleanor here. 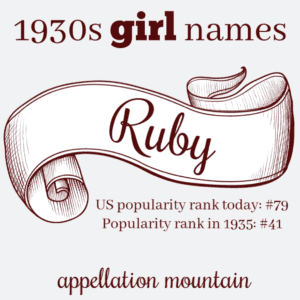 As colorful as Scarlett, as borrowed from the natural world as River or Skye, Ruby could have been discovered in the year 2000. Instead, it’s been around for ages, never out of the US Top 1000. A bonus? The Rolling Stones and the Kaiser Chefs, Rancid and Kenny Rogers have all recorded songs with Ruby in the title. Read more about Ruby here.

Some of these names fit with the category above. Except they’re so classic that it’s tough to peg them to the 1930s – or any decade, for that matter. They’re the evergreen classics 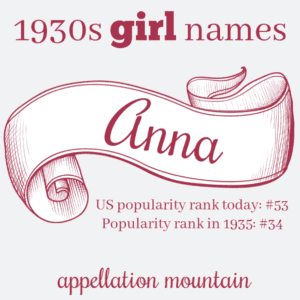 Ann, Anne, and Anna all count as evergreen classics, though the various forms have risen and fallen with the years. Anna strikes me as sweetly vintage. Musical Annie ranked in the Top 100 as an independent name back in 1935, too; today it’s most likely an affectionate form of the more popular Anna. 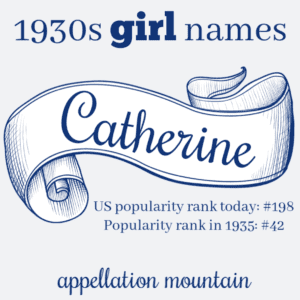 Spelling can be tricky. At first glance, Catherine has fallen out of use. But it’s simply that today’s parents prefer Katherine-with-a-K, now ranked #105. Nickname-rich, worn by saints and queens, Catherine makes an enduring choice, regardless of spelling. Read more about Catherine here. 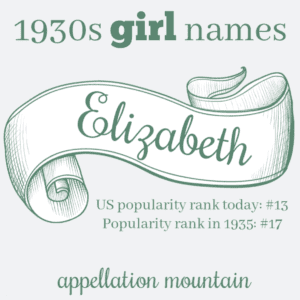 Regal and saintly, Elizabeth might be the most enduring of the classic girls’ names. It’s one of the few to hover around the Top 20 pretty much every single year. That makes it evergreen – at home in 1935, 2017, and well beyond. Favored nicknames come and go, but the formal version remains at the top. Read more about Elizabeth here.

As classic as Katherine, as enduring as Eleanor, no question Margaret belongs with the classics. A former Top Ten favorite, the name fell after the 1960s. Today it seems to be in the midst of revival. And yet, I’m not sure any name as consistently used as Margaret could ever be considered truly out of favor. Read more about Margaret here. 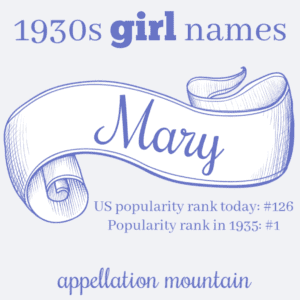 Few think of Mary as unusual, but this 1930s chart-topper is the ultimate familiar-but-uncommon choice. Simple, feminine, and strong, Mary hits the mark many parents are after. But after so many decades at #1, we often don’t see it that way. Read more about Mary here. 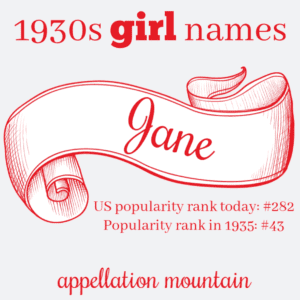 Jane reads literary – think Austen, for starters – spare, and energetic. Some might dismiss it as common, but you’re far more likely to meet a Grace – or even a Jade. Jane manages to feel old-fashioned and romantic, mid-century modern, and at-home in the twenty-first century – a versatile choice, indeed. Read more about Jane here. 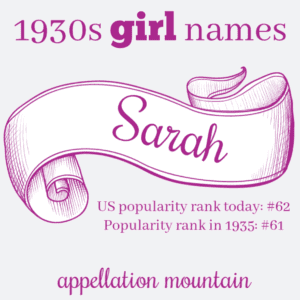 Odds are you know a Sarah (or maybe a Sara) in nearly every age range. It’s Biblical, feminine, and truly timeless. Because it spent over three decades in the US Top Ten, though, it’s easy to miss the name’s staying power. Reviewing the 1930s names data reminds us of Sarah’s classic status. Read more about Sarah here.

Which are your favorite 1930s names? And don’t forget to look for the next installment in this series, when we look at the names that might be next in line for revival.