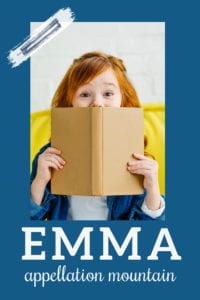 The baby name Emma belonged to a medieval queen, an action hero, the most beloved of literary heroines, and tens of thousands of girls born in the last two decades.

Thanks to Erin for suggesting our Baby Name of the Day.

Ages before Jane Austen picked up a pen, the baby name Emma was in use. Well – at least the Germanic Ermintrude and Irmingard were, along with plenty of variants.

The first element of those names is ermen – whole, universal. Shortened, it became Irma and Imma.

Between those clunky charmers and the baby name Emma is a twice-crowned queen, the mother of two future monarchs.

The Normans have some fabulous, obscure names on their family tree: Gunnora, Gunhilda, Sprota, Herleva, Gytha. But there’s also Judith, Edith, Matilda, and Emma, the daughter of Richard, Duke of Normandy.

Normandy’s growing power made her a sought-after bride in the early eleventh century. She first married Aethelred, king of England.  After his death, Cnut of Denmark won the throne – and married Aethelred’s widow. She was the great-aunt of William the Conqueror.

No wonder, then, that Emma was used throughout medieval Europe, including England.  Two saints, both noblewomen by birth, answered to the name.

At some point, the baby name Emma faded from use.

During the eighteenth century, Matthew Prior penned the poem “Henry and Emma,” reviving the medieval favorite.

Beloved author Jane Austen quoted Prior in her novel Persuasion. Far more memorably, Austen gave the name to the matchmaking Miss Woodhouse in her 1816 novel Emma.

Gustave Flaubert added a second literary dimension to the name with his 1856 Madame Bovary. But that’s not often the Emma that comes to mind.

EMMA ON THE SMALL SCREEN

In any case, the baby name Emma ranked in the US Top Ten during the late nineteenth century. By the 1970s, it had plummeted to the 400s – near obscurity.

But even then, Emma would’ve been immediately recognized as a given name. One bright spot: in the UK, Diana Rigg played the wildly stylish Emma Peel in The Avengers. Not only was she gorgeous, but Peel backed it up with a brilliant mind and a black belt.

But that didn’t change the name’s ranking in the US.

One factor that might have nudged the baby name Emma into wider use? Sitcom Kate and Allie debuted in 1984. The story of two divorced moms teaming up to raise their children together in New York City, it ran for six seasons. One of those children? Kate’s daughter, teenage Emma.

This means the baby name Emma was already climbing as Emma Thompson’s career took off in the early 1990s. The British actor scored a BAFTA, Golden Globe, and Best Actress Oscar in 1992 for her work as Margaret in Howards End.

Then came 1996, with Gwyneth Paltrow starring in a silver screen adaptation of Emma. Austen’s beloved novel came to life, and introduced a new generation to the classic.

Doubtless some of those Emma fans remembered the movie as they named their daughters. But it wasn’t just Paltrow’s performance that kept the name top of mind.

In 2001, young Emma Watson debuted as Hermione Granger in the Harry Potter movies.

On Friends, Ross and Rachel named their daughter Emma in 2002. The event often gets credit for catapulting the baby name Emma into the spotlight. While the name was already rising fast, 2002 marked the year Emma returned to the Top Ten, jumping from #13 to #4.

Pop culture associations never slowed down, either. From January Jones playing Emma Frost in an X-Men movie to Once Upon a Time’s Emma Swan, the name appears everywhere – not just in your local kindergartens and playgrounds.

Brief and complete, Emma is a traditional favorite. It’s feminine without being fussy. From a medieval queen to an unforgettable Austen heroine, it’s a name that appeals for plenty of reasons. And despite the name’s mega-popularity in recent years, it truly does feel timeless.

That’s the only drawback, of course. Emma is widely used and wildly well-known. But if you don’t mind sharing, it remains a traditional – and enduring – choice for a daughter.

Would you consider the baby name Emma?