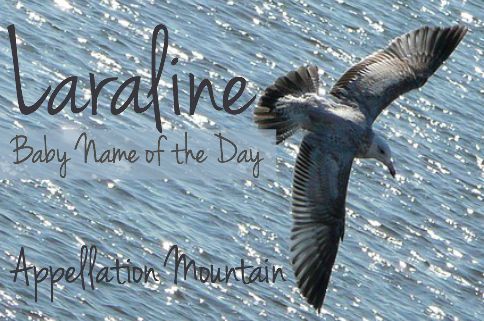 It’s less common than Caroline or Adeline – but is this a name at all?

Our Baby Name of the Day was inspired by my daughter’s Roman name: Laraline.

In our kids’ school, second grade is the Roman Year. In addition to spelling and multiplication, second graders study Ancient Rome in depth. Part of the fun is taking a Roman name.

The kids draw them at random, and sometimes they’re charmingly mismatched. This year’s Rufus has white-blonde hair! But my daughter’s name is quite fitting: Laraline, which means seagull. Her real-life bonus middle name is Wren, after her Aunt Bird, so it seemed like it was meant to be.

Now, I’m confident their teacher found the names someplace reasonable. She’s smart and funny and works incredibly hard to bring the ancient world to life for the children. (She also reads this blog occasionally, so if you happen to see this, hello M.P.!) But obviously, I had some homework of my own.

The word for gull in Latin is larum, and larus is a genus of gulls. Laraline sounds like it might mean “of or relating to a gull,” along the lines of canine, feline, and bovine.

But no. The proper term is larine.

Gulls are common birds, on the bigger side, usually grey or white, and while they’re quite lovely, they can be fierce. When I was checking to see if gulls were native to Italy, I found this story about non-native gulls wreaking havoc in Rome. That said, the birds do live pretty much everywhere, though they’re mostly associated with the coastline.

Laraline: What Did Ancient Romans Name Their Daughters?

Roman names were completely different than given names as we know them today. The number of first names – praenomen – in use was small, and often bestowed based on strict tradition rather than preference.

Cognomen were different, and could be created from nouns and adjectives as needed – though eventually they were inherited, too. Many related to animals, including birds.

Aristocratic women were named after their fathers – so if Cornelius had three daughters, they were Cornelia Prima, Cornelia Secunda, and so on. It’s pretty anonymous. It’s also difficult to know precisely how the system worked in every day life, especially as regards women.

There was a Roman family known as the Lartii. Their family name was Lartius, and it wasn’t Latin at all. It was Etruscan. Lars Tolumnius was King of Veii, an Etruscan city-state neighboring Rome circa 400 BC, and Lars Porsena ruled the Etruscan city-state of Clusium a century earlier.

It appears that Lars meant lord in Etruscan. Could Laraline come from Lars? Possibly.

The name could also be an elaboration of Lara, which did see some use in the ancient world.

Most sources say it came from laleo – to talk. In Roman myth, Lara or Larunda was a chatty water nymph who had children with the messenger god Mercury. Their offspring were known as the Lares – minor guardian gods charged with protecting a household, a farm, or a road.

But of course, Laraline could also be a modern invention.

Five girls were named Laralyn in 1974. Lurline is a form of Lorelei, first used in an 1860 poem by William Vincent Wallace. Laraline falls somewhere in between the two, but has never been given to even five girls in a single year, though there are a few listed in the 1940 US Census.

If you’re after a name that’s rarer than Adeline, or maybe an avian name that’s less common than Raven, Laraline might be one to consider.

What do you think of Laraline? Does it feel too invented?