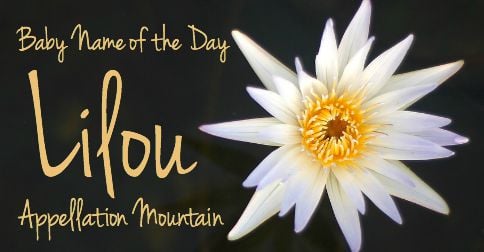 Is this an old-school français nickname? Or a sci-fi invention from the 23rd century?

Thanks to Lily for suggesting Lilou as our Baby Name of the Day. 1997’s The Fifth Element starred the very American Bruce Willis, but the director and co-author was famous Frenchman Luc Besson.

Set in the twenty-third century, Bruce played Korben Dallas, an unassuming taxi driver who becomes responsible for the fate of the Earth when a beautiful, mysterious woman crashes into his cab.

Korben and his passenger must gather four stones that will help the planet fend off an attack from the great evil, which now looms in the sky above.

The passenger calls herself Leeloo, and is played by supermodel Milla Jovovich, and it turns out that she’s an integral part of stopping the great evil.

All ends happily, with Korben and Leeloo falling for each other. Love saves the day, and life on Earth continues. The movie was a hit, in France, the US, and elsewhere.

Something else happened in 1997. Suddenly, French parents starting using the name Lilou – pronounced exactly the same as Leeloo.

With timing like that, it’s impossible to say that the movie wasn’t the source of inspiration. And yet, the spelling is different, and I’ve come across lots of alternate origin stories for the name, including:

More evidence that the name existed prior to the movie? A few women were definitely given the name in the years before, including French actress Lilou Fogli, born Amelie-Lilou in 1981.

Lilou has been in the French Top 20 since 2006, and while it peaked a few years ago, the name remains very popular. It’s also spelled Lylou and yes, sometimes Leeloo – which I think we can safely assume is a nod to Besson’s 1997 sci-fi hit. 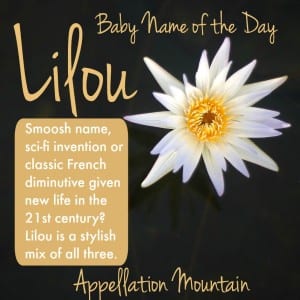 We’ve also loved lots of names with the repeating L-l, like Layla, Lila, and Delilah.

There were also eleven newborn Leeloos last year, but that spelling hasn’t been as popular as Lilou.

It’s possibly, of course, that some parents put Lillian or Liliane or another Lily-name on the birth certificate, but used this more distinctive nickname.

The letter L is a big favorite in France, too, with names like Lea, Lola, Lisa, Lou, Louane, Lena, and Lina all quite popular.

When we talk about French names for girls, we tend to stick to the classics. The time-tested Genevieve and Marguerite and Madeleine. But the French, like many Europeans, prefer shorter names today. It’s a trend that Lilou fits beautifully.

What do you think of Lilou? Would you use it as an independent name, or do you prefer it as a nickname for something longer?