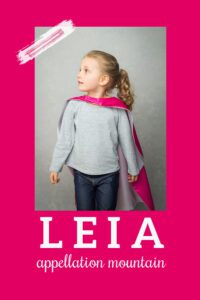 The baby name Leia came to us from a galaxy far, far away. But there’s so much more to this story.

Thanks to Jo for suggesting our Baby Name of the Day.

The Old Testament Leah rose in use following the Protestant Reformation. Brief and complete, it’s also spelled Lia in Latin translations … and Leia in Greek. Along with Lea and Lya, all five spellings appear in use internationally. Leia remains a standard spelling in Portuguese.

In English, Leah and Leia aren’t interchangeable. Instead, Leah rhymes with Mia – a long E sound. The baby name Leia, on the other hand, sounds like May and Kay.

But that’s not universally true. In some languages, Leah does sound like Leia.

Did George Lucas pluck the princess’ name from Portuguese or Hebrew?

Of course, many of these spellings could have evolved naturally in English.

The baby name Leia first appears in the US popularity data all the way back in 1949, with seven births recorded. Several of the alternate spellings pre-date Star Wars by a decade or more, too.

He notes that the developed the names phonetically, with hints about each character’s traits embedded in their names.

Names endure across millennia. Not every name. Waldemund has been left to the history books. But the classics persist, even if they change form over time. Ioannes is now John, and became Han in the Star Wars universe.

It’s easy to trace the thread from Leah – or Lee or Layla or even Lily – to the baby name Leia.

When we encounter Han, Luke, and Leia in a galaxy far, far away, their names sound familiar(ish).

It’s easy to forget that Star Wars debuted on just a handful of screens back in 1977. The studio had low expectations for the film. Lucas himself expected it to flop.

Instead, it became one of the first Hollywood blockbusters, and cemented its characters – and their names – in pop culture forever more.

At first, Leia looks like a damsel in distress. She appears as a hologram, beseeching: “Help me Obi-Wan Kenobi, you’re my only hope.”

We quickly learn she’s so much more.

Princess Leia Organa of Alderaan starts out as a senator – and a rebel. Part-spy, part-diplomat, she’s smart, fearless, and rocks a serious cinnamon bun-inspired hairdo. Fisher became the princess the 1980s was waiting for, an iconic character easy to admire.

Throughout the series, we learn that she and Luke are siblings – twins! We see her taken captive by crime boss Jabba the Hutt – though she ultimately does him in. In 2015’s The Force Awakens, we find out that she’s still fighting the good fight, and now prefers the title General to Princess.

She’s ultimately the bridge between the Skywalkers and Rey, training the next generation in the new trilogy.

While the baby name Leia traces its origins back before the film, there’s no question that everything changed in 1977.

The baby name name Leia stabilized as the saga continued, dropping in the late 1980s and 1990s.

By the twenty-first century, nearly anyone starting a family grew up in a world with Star Wars as part of our cultural backdrop. The baby name Leia felt more like a hero name borrowed from legend that a recent invention.

It also fit right in with our love of lovely L names. Lila, Lyla, Lily, Lucy, and Lorelei were all rising in 2006, too.

As of 2020, the baby name Leia ranked #295 in the US. That’s the name highest chart position yet, and a solidly mainstream position, too.

Alternate spellings have fared well in the same era.

Credit two things: an on-trend sound that satisfies many parents’ wishes for their daughter’s name. It’s lovely and liquid and flowing.

But Leia has also transitioned from creative-twist-on-Leah status to straight-up hero. Few fictional characters occupy the same place in pop culture history that Leia does. She’s iconic. Her name feels enduring, both because it has deep roots in more traditional choices, and because the character has become such a strong, beloved fixture in our collective memory.

What do you think of the baby name Leia? 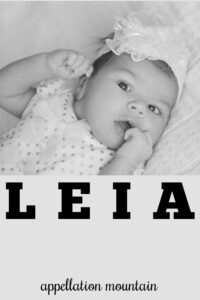