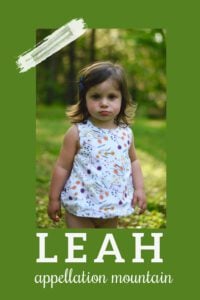 Leah, she of the tender eyes, spends much of the Book of Genesis in competition with her younger sister, Rachel. They both marry Jacob and bear him children.

Philosophers and writers loved to compare them. Philo associated Leah with reasoning and Rachel with feeling. Augustine made Rachel the symbol of monastic life; Leah, of the active one. In Dante’s Purgatory, Leah explained that Rachel’s “joy is in reflection, mine in act.”

The baby name Leah rose in use during the Protestant Reformation, as Old Testament choices replaced saints’ names. It traveled to the New World early days.

AN ABUNDANCE OF LEAHS

The baby name Leah has never left the US Top 500, not since the data was first recorded in the year 1880.

Since 1979, it has appeared in the US Top 100 most years. That makes it a name for a mother or a daughter, tough to pin to any particular decade.

Pick a decade, and someone notable has answered to Leah.

Change the spelling ever so slightly, and the baby name Leah becomes a world traveler.

Drop the h, and Lea appears in French and German, as well as Scandinavian and Slavic languages.

Keep both vowels, and Leia is the possibly-related name of Star Wars hero Leia Organa.

It’s not just the baby name Leah, though.

There might be just one Leah in any given class, but chances are that there will also be a Layla, Elena, Ella, Lily, Lyla, Luna, Lucy, or Eloise in the same group.

And yet, even though L names dominate the popularity charts for girls, the baby name Leah remains a timeless favorite. It’s complete and enduring, a name equally appropriate for a child or an adult.

It’s not trendy or dated. In many ways, Leah hits the sweet spot.

What do you think of the baby name Leah? 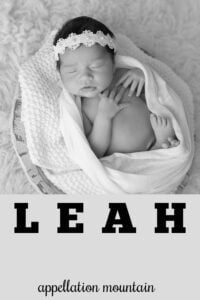