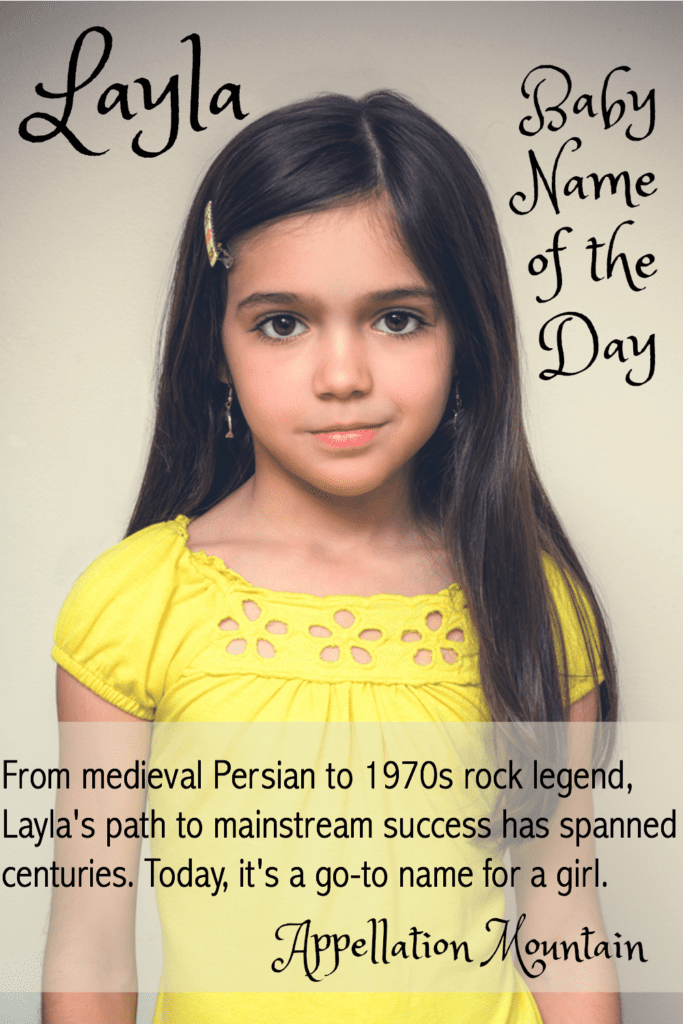 Layla became a smash hit single for Derek and the Dominos, and a go-to name for girls, too.

Top 100 month continues with this medieval, music Baby Name of the Day.

We talk of Romeo and his Juliet in the West. But in the Arabic world, the star-crossed lovers answer to Layla and Qays.

In brief, it’s a tale of two young people who fall madly in love, but her father disapproves. She is forced to marry another. He goes mad; they both die of heartbreak.

Others imitated and expanded on the story, and it became wildly popular throughout the Arabic world in the Middle Ages, and beyond.

Another literary use occurs thanks to Lord Byron. Published in 1813, The Giaour told of harem girl Leila. She falls in love with a non-believer – a Christian. Giaour is another word for infidel. Things end tragically for all.

The poem became the first of Byron’s “Turkish Tales,” all wildly popular.

Byron chose the name for a second character, in his epic “Don Juan.”

You might expect any famous literary name to see some use in the US. And it did – but only sparingly. In 1950, seven girls received the name. In 1970, eight were recorded.

But something else happened that year, transforming the name from seldom heard to widely familiar.

Layla: Derek and the Dominos

A young Eric Clapton formed Derek and the Dominos in 1970. Clapton and company would record only one studio album, but it became legendary.

Layla and Other Assorted Love Songs debuted in 1970. The title track was inspired by Clapton’s unrequited love for Pattie Boyd, married to George Harrison of The Beatles. Clapton had read Ganjavi’s poem, and identified with the madness of the thwarted lover.

The song failed to top the charts. Only later versions, released on compilations, would begin to boost the song, the first in 1972.

1990’s GoodFellas soundtrack memorably included the song. Then Clapton recorded an acoustic version for MTV Unplugged in 1992. That new version became the reason that Layla soared.

In 1993, the acoustic version won the Grammy Award for Best Rock Song. By 2004, Rolling Stone named the original to its list of 500 greatest rock songs.

During that decade, the name rose to just outside the Top 100.

Something else happened in that era: American parents feel in love with Kayla and Hailey, and a host of mix-and-match possibilities sharing similar sounds.

Between the song and the sound, this name couldn’t miss.

Of course, the name also appealed to parents of Arabic heritage, looking for a girl’s name that would wear well in the US.

It also appealed to parents because of the repeating L-l. Other names that rose in the same era included the botanical Lily, as well as Lila and Delilah.

While the name peaked at #29 in 2014 and dropped to #30 in 2015, the name might be even more popular. That’s thanks to multiple spelling possibilities, including:

Regardless of spelling, they all come from words that mean night or dark, or perhaps beauty.

Today, the name feels like a well-established choice for a daughter. It spans several cultures, brings to mind Byron and Clapton, and sounds like many a mainstream favorite. There are plenty of reasons to love the poetic, musical Layla.

What do you think of Layla? Would you consider this name for a daughter?