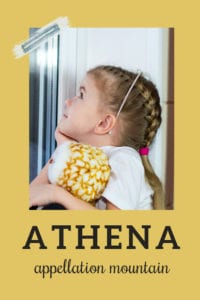 The baby name Athena brings to mind an armor-clad goddess with an owl on her shoulder, but it feels perfectly wearable for a child, too.

Among the pantheon of Greek gods, Athena is one of the most ancient. Legend has it that she’s the daughter of Zeus and Metis, the goddess of knowledge. A prophecy foretold that their offspring would rival Zeus himself. So the king of the gods swallowed his lover whole.

Too bad Metis was already expecting.

Other accounts insist another god smashed open Dad’s cranium with an axe.

But instead of her father’s rival, Athena became his favorite – the only other god to wield the thunderbolt. From her earliest days, she served as goddess of war. But instead of carnage and bloodshed, Athena was renowned for strategy and cunning.

As the rise of Athens and Classical Greece elevated philosophy, Athena evolved, with emphasis placed on her general wisdom, rather than her tactical know-how alone.

Speaking of Athens, she bested Poseidon to become the patron of Athens. She appears in plenty of myths, giving the assist to heroes like Odysseus, Jason, Heracles and Perseus. The goddess had her moments, though – she quarreled with Arachne over her spinning skills and was responsible for Medusa’s snaky hairdo and stony gaze.

While there have been plenty of guesses, the origins of Athena’s name are lost to time. Odds are she took her name from the city, but that doesn’t help much – we debate the etymology of Athens, too.

But it would be fair to say that today her name implies wisdom. Like her Roman counterpart, Minerva, she’s popular as a symbol in the military and higher education. And owls, also known for their intelligence, are often pictured on Athena’s shoulder.

Unlike Minerva, the baby name Athena ranks in the US Top 200.

Credit goes to a quirky movie from 1954.

Athena tells of the unconventional, bohemian Athena Mulvain. She falls in love with a buttoned-down lawyer. It’s a musical and a comedy, and maybe a little bit of a fairy tale, because all ends well.

While the movie fell flat at the box office, the baby name Athena debuted in the US popularity rankings in 1955.

The baby name Athena continued to gain in use over the years, but remained relatively obscure.

In 1979, the movie Escape to Athena gave the name to a mountain, rather than a person. A comedy-adventure, the movie took place during World War II. It wasn’t especially successful.

The Who’s 1982 single “Athena,” on the other hand, reached the US Top 40 and remains familiar, all these years later, a staple on classic rock stations.

Pete Townshend wrote the song in homage to Theresa Russell. In fact, the first demo of the song used the name Theresa in the lyrics. Then Townshend reconsidered the wisdom of using his crush’s name so prominently, and Theresa became Athena.

In between the World War II movie and the rock anthem, we met Lieutenant Athena in 1978’s Battlestar Galactica.

There’s a corresponding spike in the name’s use in 1979.

While the Battlestar Galactica universe has been re-booted and re-imagined, the name hasn’t been featured since. (Though a character eventually uses it as a call sign.)

Still, it adds a certain futuristic dimension to the name. Given the series’ reinvention over many decades, it’s likely some parents discovered the baby name Athena from the universe.

What’s certain is that the baby name Athena has continued to gain in use, reaching at all-time high of #117 in 2018.

There’s a Danish princess by the name, born in 2012. (Though she’s likely part of the trend, more than a reason for it.)

Athena fits with so many stylish girl names starting with A, as well as emerging favorites like Thea. It feels edgy and modern, but thoroughly mainstream.

The baby name Athena promises to climb even higher.

It sounds stylish, and projects an image that is smart and strong. If you’re after a name both feminine and steely, Athena might be the perfect choice.

Would you consider the baby name Athena?