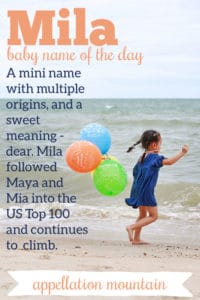 Mila blends the traditional and the modern, a straightforward name that’s less expected than Emma or Ella, but every bit as wearable.

Thanks to Meryl for suggesting her daughter’s name as our Baby Name of the Day.

Mila appeared in the US Top 1000 just once, in 1881, and then disappeared for more than a century.

Except odds are that the name wasn’t really gone. After all, it’s long served as a short form of names that begin and end with the letters. Milena and Camila, Amelia and Milicia, there’s no shortage of names that can slim down to Mila.

Many of the common names beginning with Mil- share an appealing meaning: dear, from the Slavic milu. But the letters and sounds occur in plenty of names, across culture and times, so meaning can prove elusive.

This name’s success owes more to sound than meaning.

In the early twenty-first century, it started to rise. Not just in the US, but internationally. It climbed in Belgium and France, Switzerland and Sweden, Scotland and Slovenia. It gained throughout the English-speaking world, too.

The name had history aplenty. Some of its enduring appeal is thanks to Croatian folk hero Mila Gojsalić. As a young woman, her town was facing attack by the Ottoman army. She infiltrated their camp, blew up their munitions, and created enough of a surprise that the locals had time to counter-attack. That was way back in 1530; her memory is kept alive in legend, as well as an opera, a statue, and an annual celebration in her hometown. (Thanks to Bird for pointing her out!)

What explains the global rise of this mini name? It follows two sound-alikes up the charts.

First came Mia, a name put on the map by actor Mia Farrow. She became an overnight sensation in 1960s mega-hit television drama Peyton Place. The name spiked into the US Top 1000 in 1964, the same year the series debuted. But it never slowed down, entering the Top 100 in 2000, and the Top Ten in 2009.

Then came Maya, a nicely international name that entered the US charts in 1970. I’m less clear about what put Maya on the map. The timing suggests Maya Angelou gets credit; her legendary work, I Know Why the Caged Bird Sings, was published in 1969. Again, the name continued to catch on as the years passed.

Doubtless Maya owed a little something to Mia. And both paved the way for our featured name, too.

In 1998, Ukrainian-born actor Milena Kunis got her big break on That ’70s Show. (So did her future husband, Ashton Kutcher.) Mila Kunis has remained in the spotlight, from comedies like Bad Moms to celebrated films like 2010’s The Black Swan.

The rise in Mila tracks. It debuted in the US Top 1000 in 2006, just as That ’70s Show was wrapping its run, and Kunis was transitioning to movies.

Just like Mia and Maya, though, this name continued to gain in use long after the initial spark.

Another factor explaining the name’s success? Another Ukrainian-born celebrity, model-turned-actor Milla Jovovich. Born Milica, Jovovich pronounces her name similarly, but spells it with two Ls instead of one.

While Milla has never caught on as an independent name in the US, Jovovich’s career arc also matches up with the rise of Mila. She co-starred in blockbuster The Fifth Element in 1997, took the lead in the Resident Evil franchise in 2002, and was very much in the spotlight as the single-L spelling of the name reached the Top 1000.

Just 51 girls were named Milla. We probably tend to pronounce Milla more like Ella, Stella, and Willa, which makes that spelling a little different.

I’d guess this sound dominates at some local playgrounds, and kindergartens with more than one of these popular names. Depending on how you measure change in popularity, this ranks as one of the fastest rising names of the last two years.

And yet, Mila shows no signs of slowing down. The name connects to so many longer forms, which helps it cross cultures and languages, from Slavic to Spanish. It appeals to parents after something short and sweet. And while it’s not as dramatic as, say, Seraphina or Persephone, there’s something just slightly different and distinctive about this name, too. The only real downside is that so many parents have discovered this name’s considerable charms.

Would you consider Mila for a daughter? Or do you like Maya or Mia better? 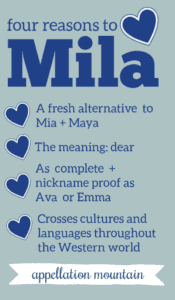