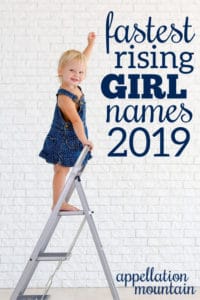 These aren’t the biggest changes in rank. Sure, it’s exciting to see which names climb quickly. But I like to look at actual births, too.

Why? A name near the top of the list might only gain a spot or two – but that small step can translate to hundreds – even over a thousand – births. And they just might help predict the future Top Ten names.

So let’s look at the fastest rising girl names 2019, the names that gained the most in terms of actual births. The data reflects all births registered between January 1st and December 31st of 2018, as released in the May 2019 update from the US Social Security Administration. 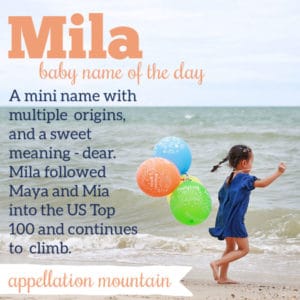 But that’s all changed now, and Mila is charging towards the Top Ten, the logical successor to many a popular name. A big bonus? The widely attributed meaning: dear. 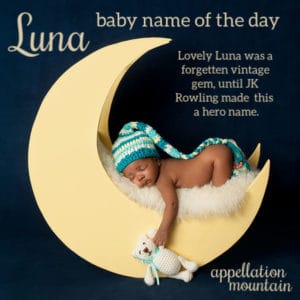 Luna is a night sky name, and a Harry Potter heroine, too. Celebrities love it, but it’s every bit as big with the non-famous. Sister Stella came first, but it’s Luna that might just make it into the Top Ten.

One quiet reason for the name’s appeal? It works beautifully in English and Spanish, making it an obvious cross-culture possibility.

Nova means new in Latin, but it’s not really novel. It appeared at the fringes of the US Top 1000 from the late nineteenth century into the 1930s. And yet, with that middle ‘v’ and ties to the night sky, it’s no surprise that Nova has become one of the fastest rising girl names of our moment.

A handful of three-syllable girl names ending in the -ee sound always rank in the US Top 100. Lately, it’s Everly’s turn. The name succeeds Avery; Avery eclipsed Mackenzie. It’s not just surname-style names, either – just ask Emily and Dorothy and Ivory. But at the moment, Everly is the undisputed queen.

Proof that Everly is the it name of 2019? Right behind the dominant spelling waits Everleigh, and it’s rising nearly as fast.

Take a rising, romantic name with impeccably ancient roots. Add a pop singer with a string of infections hits. (Are you singing Havana ooh-na-na now, or is that just me?) Factor in the name’s English-Spanish crossover potential, and what do you have? One of the fastest rising girl names 2019, of course.

I’ve yet to write about Camila, but check back and I’ll update when I do.

Amaya came from nowhere to debut in the US Top 1000 back in 1999. It has roots in Basque, making it popular with Spanish speakers, but also in Japanese. Some parents probably choose it for those culture-spanning possibilities; others might simply appreciate the sleek and liquid sound.

I’ve yet to write about Amaya, but check back and I’ll update when I do.

Like Mila, Isla had never been big – or even really heard – in the US until recently. In Isla’s case, the name debuted in 2008. Credit goes to the sound, but also to the career of Scottish-Australian actor Isla Fisher, which took off right around that time. The gentle nature name imagery of an island probably boosts this name even more, though it might cause the occasional pronunciation question. In Spanish, it’s ees-lah, but my guess is nearly everyone rhymes Isla with Kyla.

We do love an ecovintage girl name. But Ivy is more popular today than ever before. What explains it? A mix of our love of nature names and Ivy’s mini name status, I think. Ivy substitutes for chart toppers like Ava, but also for the wildly popular Violet. It works especially well for a winter baby.

Gently vintage, Amelia feels lady-like and traditional. But who hasn’t heard of pioneering aviator Amelia Earhart? She flew solo across the Atlantic Ocean, advanced possibilities for women in flight – and everywhere else – only to disappear in 1937 during a flight over the Pacific. The mystery of her final journey fascinates and puzzles researchers even today. It also lends a kind of bravery to Amelia, as if the name might inspire great things in a child. 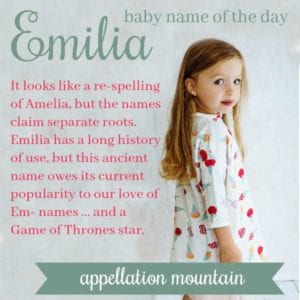 It looks like a re-spelling of Amelia, but they’re not quite the same name. Strictly speaking, Emilia comes from Latin and Amelia from Germanic roots. Emilia’s rise owes something to Amelia, but also quite a bit to Emilia Clarke, star of Game of Thrones. If that sounds outlandish, remember that Clarke’s role on the blockbuster series encouraged parents to name their daughters Khaleesi. So it’s clear she’s had significant impact on baby naming circa 2019, and could get credit for Emilia’s Top 100 status.

Speaking of Game of Thrones, Arya-with-a-y brings to mind one of the series’ main characters. When we meet Arya Stark she’s a headstrong tomboy; by the final season, she’s a practiced and courageous warrior. Aria-with-an-i remains far more popular, ranking an impressive #19. And yet, it’s the ‘y’ spelling that gained so dramatically this year.

I’ve yet to write about Arya, but you can read about Aria here.

Long, elaborate Valentina carries plenty of romance. After all, it’s the feminine form of Valentine, that hearts-and-flowers kind of name. It’s especially popular in California, Texas, and other states with a considerable Spanish-speaking population. Could it be that Valentina is the new Isabella?

Along with Remy and Remington, Remi has leapt in use over the last few years. The given name isn’t directly related to the surname, though, practically speaking. the shorter versions tend to be a nickname for Remington. And while all of the Rem- names are rising for boys and girls alike, it’s Remi that comes in first. Of course, the ‘y’ spelling brings to mind a very specific character. That would be Remy, the Parisian rat who dreams of becoming a famous chef.

For years, Rose has always been the bridesmaid. Rose became the go-to middle name choice, a default right up there with Grace. Other Rose names have flourished, but we’ve often overlooked the simplest form of the name. So it’s quite a pleasure to see elegant, storied Rose move into first place – at last!

I’ve yet to write about Rose, but check back and I’ll update when I do.

It sits at end of many a chart-topper and traditional favorite, from Amelia to Cecilia, dramatic Ophelia, botanical Magnolia. And yet just Lia seems all-too rare. It’s sparer than Biblical Leah, completely logical in our age of Mia. In some languages, we spell Leah L-I-A, so it’s not exactly a re-spelling, either. And yet, until this century, it was quite rare for girls in the US.

I’ve yet to write about Lia, but check back and I’ll update when I do.

Amber hit it big in the 1980s. But lately, it’s fiery Ember on the rise instead. Like so many Em- names, it fits with Emma and friends. But it also brings to mind smoldering fires. It’s a noun name with plenty of powerful associations, and a handful of fictional characters have boosted the name’s profile, too.

I’ve yet to write about Ember, but check back and I’ll update when I do.

A gentle nature name, Willow comes from two pop culture influences. Will and Jada Smith gave the name to their daughter, inspired by dad’s name. And Joss Whedon chose it for his whip-smart witch in 90s cult classic Buffy the Vampire Slayer. No surprise that a generation of parents grew up imagining Willow as a just-different-enough name for a daughter. The ‘o’ ending makes it modern, but, like many a nature name, it feels rooted in tradition.

Hawaiian names have been quietly trending for a few years now, led by Kai. But lately -lani feels like the new -lee, a mix-and-match element that works with lots of sounds. This particular spelling is courtesy of the mononymous singer Kehlani.

I’ve yet to write about Kehlani, but check back and I’ll update when I do.

Rising nearly as fast, Kailani is the original spelling of Kehlani. Kai refers to the sea; lani, to the sky. Or to heaven. A name that brings to mind the ocean and the sky above seems likely to appeal to parents. Sound-wise, Kailani makes a logical successor to Kaylee and company, the names that dominated an earlier decade.

I’ve yet to write about Kailani, but check back and I’ll update when I do.

If Emma and Emily, Avery and Everly all appear in the US Top 100, then it’s no surprise that Emery has joined them. A surname name with built-in feminine nicknames like Emmie, Emery checks all the boxes for a modern favorite. Variant spellings of this name are also rising fast, from the obvious Emory to the wait-what, is-that-even-the-same-name Emmarie, a newcomer to this year’s Top 1000.

I’ve yet to write about Emery, but check back and I’ll update when I do.

The name of a Spanish mountain range, Aitana debuted back in 2015. It’s more than doubled in use since then. He named his daughter for mountains; in turn, her goddaughter bears the name. Aitana Sánchez-Gijón became a celebrated actor, both in Spain and internationally. That explains the name’s rise in the Spanish-speaking world, and adoption in the US, too.

I’ve yet to write about Aitana, but check back and I’ll update when I do.

We love Ava, and Addie names are everywhere, from Addison to Adeline, with spellings galore. So maybe the rise of Ada is natural and inevitable. A century ago, Ada reliably appeared in the US Top 100. These days, the name’s rise has been far more gradual. But maybe that’s about to change.

Zuri owes something to our love of Z names like Zoe and Zara. But it’s also the kind of name that appeals to parents seeking a heritage choice with a strong meaning. It comes from Swahili and means beautiful. While it’s skyrocketed for girls over the last several years, it’s been heard for boys, too. Singer Patti LaBelle used it for a son back in the 1970s, and Forest Whitaker wears the name in the Black Panther movie. Disney gives it a boost, too – there’s a young lioness by the name in the extended Lion King universe, and a popular (female) character on Disney Channel series Jessie and spin-off Bunk’D.

Did any of the fastest rising girl names 2019 take you by surprise? What are your favorites?