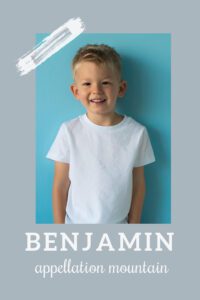 From an Old Testament patriarch to a Founding Father, a friendly bear, and a famous rabbit, there are plenty of Bens to inspire parents.

Thanks to Ashlie for suggesting our Baby Name of the Day.

Founding Father Benjamin Franklin started out as a printer and newspaper editor. He became a widely respected writer and civic leader. While Franklin eventually served as Ambassador to France, we remember him more as a scientist and inventor. Franklin also established many civic organizations, including the city of Philadelphia’s first fire department. He also played a key role in establishing the University of Pennsylvania.

It’s hard to say just how common the name was in Colonial America. Franklin was the fifteenth of seventeen children, so family names might have been exhausted by the time of his birth.

Like many Old Testament names, it became more common following the Protestant Reformation. Franklin’s siblings included Ebenezer and Lydia, and his parents were Abiah and Josiah, so even if the name wasn’t common, the style would have been familiar.

Benjamin Banneker authored almanacs and worked as a surveyor in Baltimore in the late 1700s. The son of a former slave, he wrote to Thomas Jefferson, famously taking him to task for continuing to own slaves.

Sir Benjamin Hall oversaw the installation of the Great Bell in Augustus Pugin’s neo-Gothic Clock Tower near Parliament on the River Thames in London. That’s one possible reason the bell was long been called Big Ben. But at the time, heavyweight boxing champ Ben Caunt was known as Big Ben, so it’s possible that’s how the landmark got its name.

Brothers Robert and Benjamin Moore founded a paint company in Brooklyn in the 1880s. It’s still around today.

The baby name Benjamin ranked in the US Top 100 from 1880 into the 1920s, so it’s not surprising to find plenty of nineteenth and early twentieth century notables.

The name fits with classics like John and Henry. never leaving the US Top 200.

ALL ABOUT THE BENJAMINS

While plenty of Bens grow up to be men of accomplishment, the name feels cuddly, too. Maybe that’s because so many famous fictional Bens have had paws, including:

The current US Top 1000 includes other Ben names, too. As wildly popular as the baby name Benjamin has become, Ben is also short for Bennett and Bentley. And other possibilities, like Benedict and Benicio, are heard, too.

The baby name Benjamin feels reliable. It’s a solid choice for a son, a handsome name worn by men of accomplishment. But it’s sweet for a child, a friendly and approachable name that never grows old.

What do you think of the baby name Benjamin?

First published on March 25, 2015, this post was revised substantially and re-published on September 15, 2021. 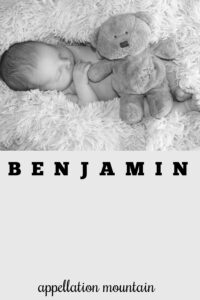