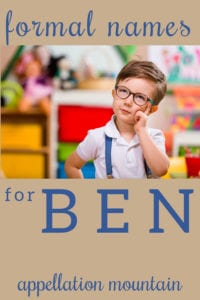 The nickname Ben is friendly, approachable, and almost always tied to classic Benjamin.

Happily, if you love the nickname Ben, but want something less conventional for his birth certificate, the options abound.

Could you go with just Ben on the birth certificate? Of course! Max and Gus stand on their own. But Ben is almost always short for something, and with so many good choices, odds are you might find something appealing.

Surnames, place names, imports, and more all shorten to the boy name Ben.

Here are some of the best!

An Old Testament name, Ben feels endlessly versatile. From Big Ben to Ben Franklin, Gentle Ben to Ben Stiller, the name fits with nearly any image. It’s a classic, and it’s part of the reason some parents might be seeking a different way to get to the nickname Ben.

As in Hollywood star Cumberbatch, and a former pope. Benedict means blessed or lucky in Latin, and makes a great just-slightly-different name for a son.

Another Hollywood-inspired option – think Benicio del Toro – and the Spanish form of Benedict.

A surname name, once again derived from Benedict, Bennett fits right in with Beckett, Emmett, Elliott, and so many ends with -tt favorites for our sons.

In the 1980s, Benson was a hit sitcom – but not an especially popular given name. In our age of Jackson, though, Benson works beautifully. Like Bennett, it’s often derived from Benedict.

An Old Testament name popular across the ages, Reuben means “behold, a son” in Hebrew. Ruben is preferred in French and Spanish, Dutch and Swedish – and it’s more common in the US, too.

With Benjamin riding high, and name like Isaiah and Elijah also favorites, why not Benaiah? The Old Testament name means “God has built.”

Originally a German surname, Benning like comes from Bernard. Like Fielding and Kipling and Sterling, -ing enders could make for distinctive and surprising choices.

A bright ‘o’ ender, Benno is one of several German possibilities, all connected to Bernard.

A Germanic name, Bernard combines elements meaning bear and brave. That contrasts with the name’s antique, gentlemanly image. While we tend to think of Bernard as Bernie, Ben feels like a nickname every bit as possible.

French surname Corbin means raven; it probably started out as a nickname for someone with dark hair. But it’s easy to imagine getting to the nickname Ben if you spell it Corben instead. Korben was Bruce Willis’ character in sci fi standard The Fifth Element.

Eben seems like a logical alternative to Evan and Ethan; it’s pronounced more like the former. The name Ebenezer means “stone of help” in Hebrew. Short form Eben might be more accessible, but Charles Dickens made Ebenezer a household name.

Preppy and polished, Bence might come from Benedict – or Vincent.

The Italian form of Benedict, and a name that’s just plain fun to say.

This Italian and Spanish rarity poses a pronunciation challenge: the ‘g’ is mostly silent. It’s either beh NEEN yo or beh NEEH no, with just the slightest hint of ‘g’. But it makes the list because it has a great meaning: friendly, from the Latin benignus. (Think of our word benign.)

Yet another form of Benedict, this time from France. Knives Out gave us Daniel Craig as the brilliant detective Benoit Blanc. This means we all – kinda sorta – know how to pronounce it: ben wah.

The name Penuel appears in the Old Testament. It means “facing God.” It’s easy to imagine Benuel as a spin on Penuel. Phanuel is also seen, and might have influenced surname Faneuil – as in Boston’s Faneuil Hall. Call Benuel a bit of a mystery, but it certainly leads to the nickname Ben.

For every Olivia, there’s a Benvolio – a name championed by Shakespeare that never quite caught on. In Romeo and Juliet, Benvolio is Romeo’s dear friend and cousin. Benvolio’s name means “good will,” and the character does his best to restore peace between the families.

It means “son of Zion” in Hebrew, a name both meaningful and stylish.

What are your favorite ways to get to the nickname Ben? 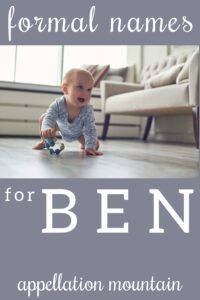