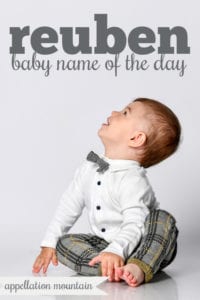 An Old Testament name with a vintage vibe, Reuben might be the neglected gem you’re seeking.

Know your Old Testament? If so, you’ll recognize Reuben as the eldest son of Jacob and Leah. The most common meaning attributed to the name is “behold, a son.”

He quarreled with his father over a woman. Most tellings insist that father and son both vied for the affections of Bilhah, a servant in their household. Other versions offer more complex – and perhaps more noble – explanations for Jacob’s deathbed renunciation of his son.

In any case, he’s the founder of one of the twelve tribes of Israel, along with his brothers and half-brothers.

Like many an Old Testament name, it was rare – at least in English – among Christian families until the Protestant Reformation.

Over in Armenia, the name became royal. They spelled it Rouben and even Roupen and Rupen. But he was no mere prince. Instead, that original Roupen declared independence from the Byzantine Empire and became Lord of the Mountains – the first ruler of Cilicia. The founders took refuge there from Seljuk Turks.

Three Reubens ruled between 1080 and the 1180s, and other dynasties followed. Still, they’re not exactly the British royal family, so I’d guess very few will automatically think of the name as regal – but no question, it is.

The Spanish spelling drops the first ‘e’ in the name. It’s the preferred form in Swedish and French and lots of other European languages, too.

This spelling ranks in the US Top 1000 every year from 1880 through today, many years reaching into the Top 200.

Add the ‘e’ back in and the numbers look different. While Reuben outranked the single ‘e’ spelling in the late nineteenth century, the opposite has been true for years. As of 2018, Reuben came in at a chilly #927, versus Ruben at #415.

Maybe that’s down to the sandwich that bears the name.

It’s corned beef, Swiss cheese, sauerkraut, and Russian dressing on rye bread, served hot off the grill. Some say the first to serve the sandwich was Omaha, Nebraska grocer Reuben Kulakofsky. Others place the creation at Reuben’s Deli in New York City.

Along with BLTs and patty melts, it’s the kind of sandwich everyone has heard of – even if you’ve never set foot in a deli.

Still, it doesn’t seem like enough to sink a name, does it? Sister sandwich the Rachel – substituting pastrami and coleslaw – hasn’t stopped that name from climbing the charts. (The sister sandwich name likely comes from this 1871 song.)

Beyond the deli, plenty of real men answer to the name.

They include Rube Goldberg, cartoonist and inventor; as well as a former governor of New York. It’s the real first name of John Wayne’s True Grit character, better known as Rooster Cogburn.

You might also think of characters from television series The Partridge Family and the rebooted Ocean’s Eleven movie franchise.

All of this places the name squarely in the past, a vintage gem. And yet, it’s a familiar one, too.

It’s heard as a surname. Among the most famous bearers? Flemish artist Peter Paul Rubens, typically known solely by his last name. He’s considered a leader of the Baroque movement. Centuries after his death, the early seventeenth century artist remains a household name.

Actors, athletes, historical figures and more round out the list.

It’s not clear why the name fell in use. Maybe we just got used to the slimmed-down Ruben spelling.

But today, there’s a very good reason parents might look at either spelling with fresh eyes: we’re wild about Ben. Benjamin ranks in the US Top Ten. Bennett and Bentley and lots of other Ben- names have fared well over the last decade or so.

That makes Reu+ben an unconventional, but appealing, route to the short, strong nickname.

Some who answer to Ruben, Reuben, or Rubin could trace their name to a pet form of the Germanic Rupert, ultimately a form of Robert.

And it’s also sometimes linked to the Old French rubi and the Italian rubino, both words for the gemstone. It’s possible this could’ve been an occupational surname for a jeweler. Or maybe, at least in Italian, it evolved as an affectionate name, another word for something precious and highly valued.

Overall, Reuben – with or without the ‘e’ – hits that sweet spot. It’s a name everyone knows but few of us are using. Drop the ‘e’ and it’s nicely international. Keep it extra vowel and it feels like a vintage revival. The meanings – from the Old Testament original to the Italian gemstone link – appeal. And it feels both nicely nickname proof and a great, unexpected way to get to Ben.

Do you like this name better spelled Ruben or Reuben? Have you met any kids by the name? 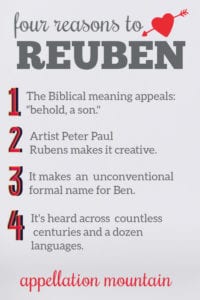