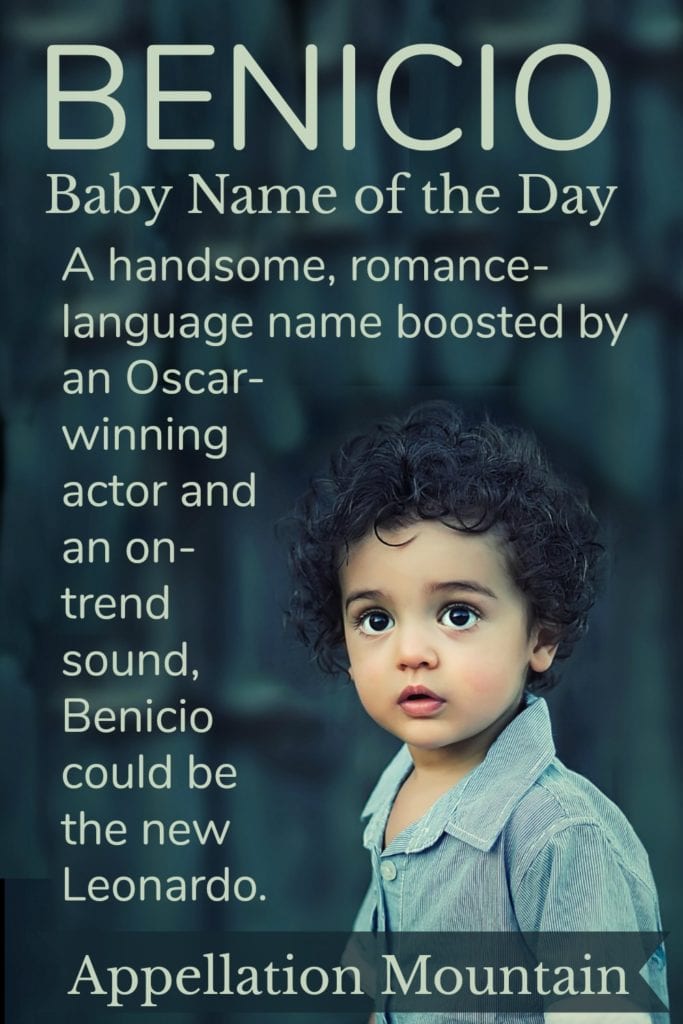 New names month continues with this handsome Baby Name of the Day.

Ben names are having a moment. Biblical, Founding Father Benjamin climbed to #6 last year. Benton, Benson, and Bennett gained, too. Teen Mom-fueled sensation Bentley slipped, but only a little.

Several of the names bridge the classic and the contemporary. Ben feels solid and traditional, a go-to name with a certain flexibility. A boy by this name could be Gentle Ben or Big Ben, a scholar or an athlete, quiet or the life of the party.

It makes sense that Benicio joined their number, a Ben name borrowed from Spanish and Portuguese.

Of course, more than Ben’s first syllable propelled this name into wider use. That final -o also makes for a stylish sound.

Boy names ending with -o are enjoying a moment. If Mateo and Leonardo can make the Top 100, surely there’s room for Benicio a little farther up on the list. It fits in the middle, somewhere between out-there picks like Horatio and Cielo and mainstream favorites like Leo and Milo.

Another bonus? This names comes with a great meaning: blessed.

While it brings to mind Benjamin, Benicio serves as the Spanish form of saintly Benedict. Saints and popes made Benedict famous. In the US, it belonged to the traitor Benedict Arnold for generations. Now English Sherlock star turned Hollywood A-lister Benedict Cumberbatch promises to resuscitate the name’s image.

For now, though, the -o ending version ranks in the Top 1000, while Benedict remains outside.

Another Hollywood actor keeps this name in the spotlight: Benicio del Toro.

The Puerto Rican-born actor won an Academy Award in 2000 for Traffic. He’s appeared in everything from celebrated indie flicks to Guardians of the Galaxy since then.

His career started way back in the late 1980s and 90s, but the jump in the name’s use didn’t come until after his Oscar-winning turn.

The name occurs in small numbers prior to 2000. But that year, 7 boys were named Benicio. A year later, it jumped to 51 births.

During 2015, del Toro starred in Sicario. His role in Guardians came the year before. Combined, it put the actor in front of many an expectant parent just as they were considering names.

Next up for the actor? He plays a role in the upcoming Star Wars movie, The Last Jedi. We know his character answers to DJ, but for now, his story is shrouded in mystery.

Benicio: Rarity on the Rise

Besides del Toro, few notables answer to this name, either in fiction or real life. I found a minor Breaking Bad character, who appeared in just a single episode. The young son in 2011 crime thriller Drives answered to the name. Argentina-born supermodel Valeria Mazza used the name for a son in 2005, but again, that’s not a headline-generating fact.

Overall, this one feels far more rare than you might expect, at least in the US.

Given the combination of the Ben- beginning and the -o ending, plus our growing affection for longer, more romantic names for boys, it might not stay that way for long.

It reminds me of another name mentioned earlier: a romance language borrowing with a long, lovely sound and an -o ending, worn by a Hollywood leading man. With Leonardo climbing, can Benicio be far behind?