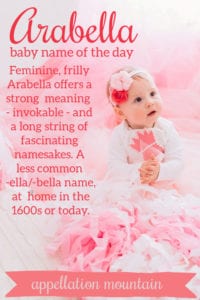 Arabella feels frilly and feminine, but there’s a certain steely strength to this name, too.

The Top 100 also gives us Ella and Stella, Bella, Gabriella, and Brielle. Isabelle and Annabelle aren’t far behind.

Maybe medieval parents in were into the same trend. Amabel – loving – appears as Amabilia and Mabella, along with other forms. Amabel morphed into Annabel, probably in Scotland.

But Amabel also led to Arabella, probably ultimately from the Latin word orabilis – invokable, able to be called upon. If that sounds cryptic, it probably refers to the practice of appealing to the saints. Orabella and Orabilia also appear in the historical record. It suggests that the bearer was given to prayer.

It’s possible, of course, that Arabella evolved first, and the name was later linked to the powerful Latin word.

After all, Mirabel – from the Latin for wondrous – appears in the same era, as do variants of that name.

Or could the name be older still?

Human settlement in modern day Irbid, Jordan dates to the Bronze Age. Sometime from the 300s BC, it became known as Arbella … or Arabella. It might be the same settlement referred to in the Bible as Beth Arbel. In any case, it was a major trading center in the years BC, known particularly for its wines.

What I can’t determine is what Arbel or Irbid or any form of the name meant way back when. But let’s assume that it’s just coincidence that the identical name evolved more than a millennia later.

The first famous figure history gives us is Arabella de Leuchars, a granddaughter of King William the Lion, king of Scotland. She was born sometime in the 1130s. There’s another aristocratic bearer of the name born later that century.

Then there’s Lady Arbella Stuart, considered a possible heir to the English throne during the reign of Queen Elizabeth I. She married William Seymour, who also ranked in the line of succession. But, but, but … the couple wed without the permission of the queen. They went to prison. She espcaed, dressed as a man. But they were recaptured, imprisoned once more, and Arbella met her end, possibly on a hunger strike.

Some say the would-be royal inspired Shakespeare’s Imogen in Cymbeline – a secret marriage, a heroine disguised as a man – though the dates might not quite line up.

In 1712, poet Alexander Pope penned The Rape of the Lock, based on a true story. Society belle Arabella Fermor was insulted when her suitor, Robert Petre, cut off a lock of her hair. Pope’s poem became an overnight sensation.

The second edition contains a dedication to Miss Fermor, perhaps an apology for sensationalizing her tale and lampooning her family.

In any case, the name was already in heavy use:

By the time US data is first recorded in 1880, the name is fading in use. It exited the rankings after 1893, and remained in style limbo for well over a century.

The name’s revival started sooner in Britain, but again, it’s back in favor today.

While it’s an elaborate, even frothy given name, possible nicknames range from the obvious Bella and Bella or Arie or even Abby. A character on All My Children answers to Babe.

Along the way, other fictional characters, an Arctic Monkeys single, a few high profile births and more have kept the name in the public eye.

If you’re after a dramatic, elaborate name that’s both on-trend and not too common, Arabella might belong on your list.

Would you consider Arabella, or do you prefer another -ella/-bella name? 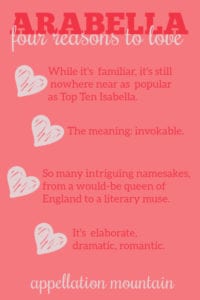