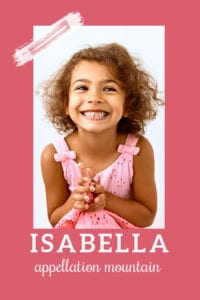 The baby name Isabella once seemed rare, but has commanded a spot in the US Top Ten for over a decade.

Thanks to Kari for suggesting our Baby Name of the Day.

You might think of Isabella as a variant of Elizabeth.

That’s true, but it’s a long and winding path.

We know the name from the Old Testament. In Hebrew, it was closer to Elisheba or Elisheva.

But the New Testament gives us the enduringly famous Elizabeth, mother of John the Baptist. She’s related to Mary, mother of Jesus, and appears in the Nativity story.

This Elizabeth is also considered a saint. No surprise, then, that the name has endured.

Tracing the name’s evolution proves challenging, but we know that Elisheva became Elisabet in Biblical Greek. Elizabeth, then, seems little changed across the millennia.

Isabel first appears in Occitan, a romance language that’s rare today, but once was used widely, especially for poetry and song. It was the language of medieval troubadours.

Occitan didn’t end names with the t sound; the name became Elisabel instead. Guesswork suggests that, because -bel means beautiful in Occitan and other romance languages, it seemed appropriate for a name. Perhaps the El- seemed easy to drop because it sounded like el Isabel – the Isabel, an article, not part of the name.

As for -bella, it’s simply the appropriate Latinate ending for a feminine name. Isabel was the daily use version.

But it is the baby name Isabella that we associate with queens. After all, so much history tended to be written in Latin.

A long list of queens answered to the name.

In 1180, King Philip II of France married Isabella of Hainault. Her name is also recorded as Ysabelle, Ysabeau, and even Elizabez on her seal.

Then there’s Isabella of France, who married King Edward II of England in 1308 while barely a teenager. But she became a capable politician in her own right. In 1326, Isabella and her allies overthrew Edward II. She served as regent for her son, King Edward III.

Another French princess, Isabella of Valois, married King Richard II of England in 1396, at the age of six. The child queen reigned for only a few years before Richard’s death.

Elizabeth, Isabel, and Isabella – along with other forms of the name – co-existed throughout this period. In fact, the names were often used interchangeably for the same woman.

But the reason the baby name Isabella feels instantly and effortlessly regal is down to one figure: the fifteenth century Queen of Castile by birth and Aragon by marriage.

A formidable ruler and the mother of seven children, Isabella operated both independently and in concert with her husband.

Along with her husband Ferdinand, she is remembered for sponsoring Columbus’ voyage to the new world, as well as the Reconquista – establishing all of Spain as Catholic. These efforts don’t hold up well to twenty-first century standards, though they demonstrate her power in her own time.

She also married her youngest daughter to the heir to the English throne. But Catherine of Aragon’s story is for another time.

The name is also associated with Italian comedy. An Isabella is part of a pair of lovers. She are her beloved are often separated through the story’s events. The original Isabellas were sweet; later versions of the character became wittier and more strong-willed.

There have been literary Isabellas ever since, including Shakespeare, Austen, Bronte, and … Twilight.

Still, notables come to mind, like philanthropist and patron of the arts Isabella Stewart Gardner. (Her former home and art collection formed the based for museum in Boston that still bears her name.)

From 1880, when data was first compiled, to the 1920s, the baby name Isabella regularly ranked in the US Top 500. At the time, Elizabeth spent most years in the Top Ten, with Isabelle hovering around the Top 250.

Then came 1990, the year of the baby name Isabella’s triumphant return to the US Top 1000.

One fascinating news story might get some credit: the Isabella Stewart Gardner Museum was the site of a famous – and still unsolved – art heist in March of 1990.

But that’s the least of it.

Days of Our Lives introduced an Isabella in 1989, one who endured all the usual tribulations one might expect:  committed to an asylum, unearthed family secrets, wrecked marriage when an ex returned from the grave.

The baby name Isabella was everywhere.

Another factor to consider? The baby name Isabella flows beautifully in English and Spanish, making it a natural choice for bilingual families. I’m not sure this Baby Center en español post provides much fresh insight into the name’s popularity, but the fact that it was written cements the name’s status as broadly popular across languages.

While Elizabeth remains the evergreen classic, never out of the US Top 25, the baby name Isabella feels like an alternative equal parts graceful and powerful.

The baby name Isabella balances a flowing sound with a storied history. It lends this name plenty of romance and strength – a winning combination.

What do you think of the baby name Isabella? Do you prefer it to Isabelle or Elizabeth? 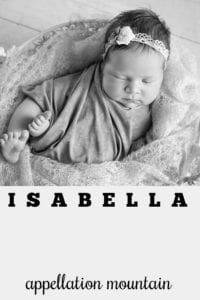 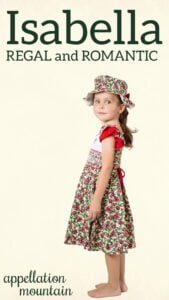