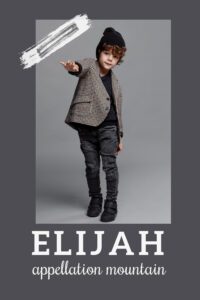 The baby name Elijah keeps climbing, a Biblical powerhouse not far behind Noah, a name that blends  effortless cool with a spot in the US Top 100.

Thanks to Saranel for suggesting her son’s name as our Baby Name of the Day.

The top boys’ name in the US has changed, cycling from John to Jason to Jacob and now Noah and Liam. But regardless of the name at the top of the list, the baby name Elijah has always charted somewhere in the Top 1000.

Ancient and religious, the name figures in the Old and New Testaments, as well as the Quran. It comes from a phrase meaning Yahweh is my God.

International forms abound. There’s Elias and Elia, Ilya and Elian, some of which are heard in the US, too.

But back to the original.

Back in the ninth century BC, the prophet Elijah performed astonishing feats. He even raised the dead. For his efforts, he was rewarded by riding up to heaven in a chariot drawn by fiery horses, or maybe on a whirlwind. Later, in the New Testament, both Jesus and John the Baptist are compared to the ancient prophet. He even makes a cameo, along with Moses, later in the story. One consistent theme? He always insists on the worship of the true God.

He features in customs and folk traditions, too. At Passover, Jewish families leave a place set for him at the table.

Cher gave the name to her son with musician Gregg Allman way back in 1976. He’s now a musician, too. More recently, there’s actor Elijah Wood, best known for his role as Frodo in The Lord of the Rings movies.

On the fictional side, Isaac Asimov used the name for a detective in his Robots series. And The Vampire Diaries, plus spin-off The Originals, includes a major character, part of the Mikaelson family, who answers to the name, too.

In both cases, the name works because of its long history. The vampire was first born sometime in the late 900s; Asimov’s detective tale takes place three thousand years in the future. Given the name’s long history of use, it’s plausible that Elijah could be heard in both circumstances.

The first version of this post, from 2012, asked if the baby name Elijah could crack the Top Ten?

What explains the baby name Elijah’s surge in popularity?

It comes the best of the ancient and the modern.

Elijah is immediately recognizable as an old school Biblical boy, a name rich with history and meaning.

But it fits with softer, more elaborate names for our sons, too. An earlier generation of Bob and Tom and Mike gave way to Jason and Ryan and Kyle.

And now? Names like Oliver and Sebastian dominate parents’ shortlists.

Plus we’re wild about Ella and Ellie names for our daughters, so no surprise to find the baby name Elijah – and Elliott and Eli and Elias and Ellis, too – very much in favor.

For Old Testament strength combined with modern sound, the baby name Elijah feels like a winning choice for a son today.

Would you consider the baby name Elijah for a son? 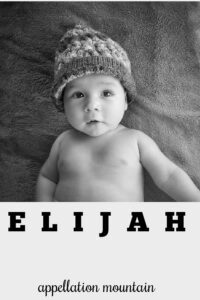