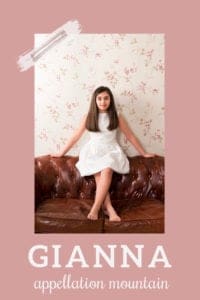 The baby name Gianna comes from the most traditional of sources. It’s a feminine form of John, via the Italian Giovanni.

But there’s something spirited and bright about this import. It’s a high-energy twist on a classic.

A staggering number of names trace their roots back to John.

The Hebrew name became Ioannes in Biblical Greek. That was whispered down the alley into Iohannes in Latin, and then Giovanni in Italian – which actually looks fairly close to the original, at least compared to John, Jackson, and Evan.

Giovanna emerged as the obvious feminine form. But just as names lengthen, they also contract. And so Gianni and Gianna filtered into use as the rough equivalents of John and Jane.

History gives us plenty of impressive women. Medieval saints and nobles wore the name. A handful of Italian opera singers answer to Gianna in the twentieth century, too.

Americans tend to give this three full syllables: gee ahn ah. It’s long and flowing, a romantic name that fits with Sophia and Amelia.

Some quarrel that Italians pronounce it like Jana – just two syllables, no ‘ee’ sound to be heard.

It’s a little more complicated than that. While noting that Italy is rich with regional dialects and accents, Italian doesn’t sound exactly like English. A great many pronunciations of Gianna – and Gianni and Giovanna – have a hint of an ‘ee’ sound. It’s quick, and easy to miss. But there’s no perfection way to describe it, and neither jah-nah nor gee-ahn-ah captures it.

English speakers have accents of our own, of course.

Which is a long way of saying that you can certainly choose the pronunciation you prefer of the baby name Gianna, and probably make it stick most of the time. But you can’t sidestep a certain amount of debate.

Then again, the baby name Gianna has transitioned from a sometimes-heard import to a fast favorite.

It debuted in the US Top 1000 in 1989. There’s no single reason the baby name Gianna caught on, but a few reasons include:

Since then, the baby name Gianna has established itself as a mainstream favorite.

Children of the 1990s grew up with the purple dinosaur at the heart of Barney & Friends. A young Selena Gomez played one of the friends – named Gianna.

Then there’s Gia Carangi, sometimes called the first supermodel, who rose to fame in the late 1970s and 80s. While Gia is sometimes short for Gianna, the model was born just Gia. That timing isn’t quite right, but consider this: a very young Angelina Jolie played the role for a successful 1998 HBO movie.

Tragedy has put the name back in the headlines.

In 2006, Kobe and Vanessa Bryant welcomed their second daughter, Gianna Maria-Onore. Also known as Gigi, she followed in her famous father’s footsteps, becoming a promising basketball player while still in her teens. In homage to her father’s nickname “Mamba,” the rising star called herself “Mambacita.”

Kobe, Gianna, and six friends were en route to a basketball game when their helicopter crashed. All passengers and the pilot lost their lives.

The baby name Gianna has appeared in the US Top 100 every year since 2006. And while it had slipped a little in recent years, there’s reason to imagine this name will continue to be used in big numbers.

Gianna combines history galore with a high energy sound. And while it sounds Italian, it no longer feels limited to a heritage choice. It’s become the kind of romance language pick – just like Isabella or Sophia – that works for nearly any family.

What do you think of the baby name Gianna? Would you consider it for a daughter?